Is Becky G a lesbian/bisexual?

What is Becky G marital status?

Who are Becky G parents? 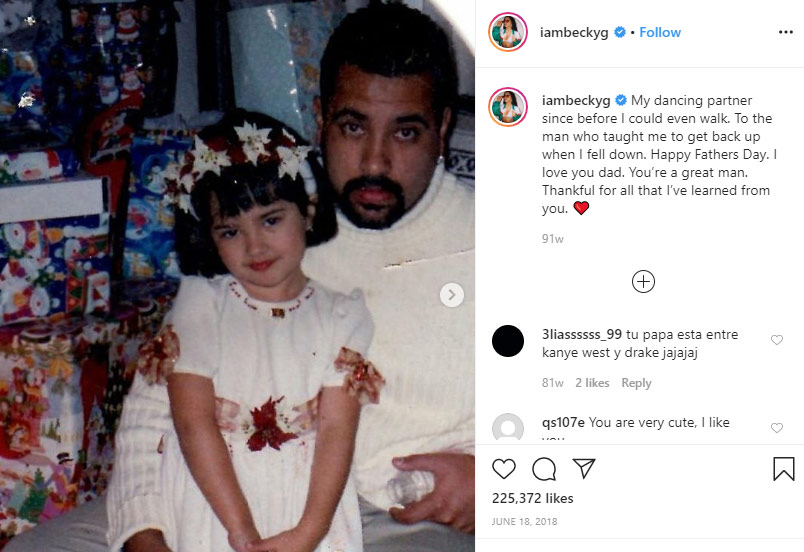 Becky G has really warm close relationships with her dad. The singer loves him and considers him a strong loving person, the best example for her.

Francisco J Gomez was born in June 1974. His parents came to the USA from Mexico and settled in California. Frank graduated from a Californian high school. There he met a beautiful girl Alejandra and married her. They parented four kids together.

Despite all love, her parents felt to each other, sometimes the family passed through a really tough time. When Becky was just 9 years old, her father lost his job and they couldn’t keep their Riverside County home. The family moved into a garage, which belonged to Becky’s grandparents. At that time the girl decided to become famous and earn as much as possible to support her parents.

But now Frank is not in financial trouble. He works as a manager at the world-famous toy company “Mattel”. With his wife and kids, he owns a house in Inglewood, CA. 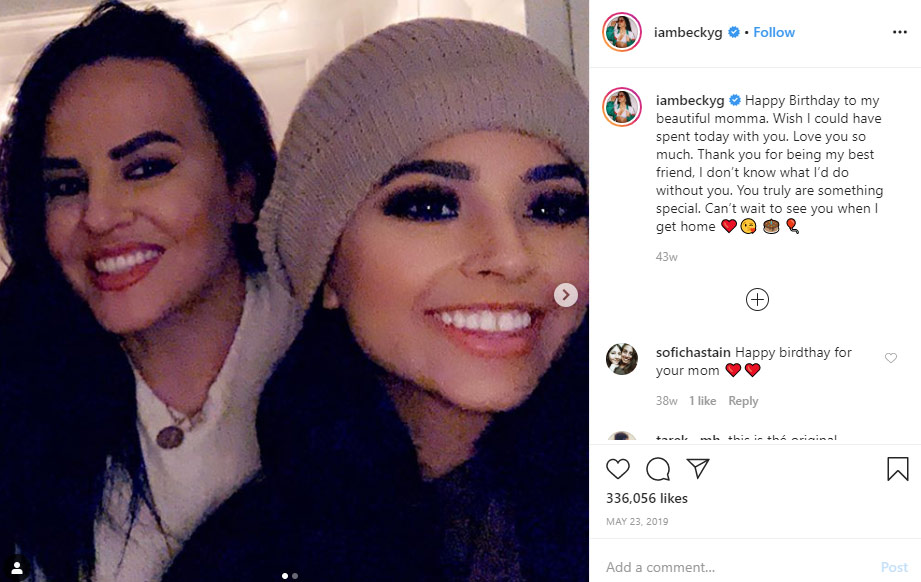 On her, Instagram Becky wrote that she “literally grew up with her mother”. No wonder, because Alex (as Alejandra M. Gomez is called in a family circle) delivered her at the tender age of 17. She met her beloved husband in her late teens when both were pupils at Santa Monica High School. Since 1996 they have been together, although their family had to pass through lots of difficulties. But as Alex says, optimism helped them to survive. “We moved in the garage in Los Angeles, and there Becky got the chance to start her career”, she tells. Mrs. Gomez is very proud of her daughter. “Her younger siblings looked at her, and she knew that she must be a great role model for them”. To make their garage cozier, Becky encouraged her siblings to build tents from bedsheets. “I was happy, and they felt that everything was ok”, the star told. 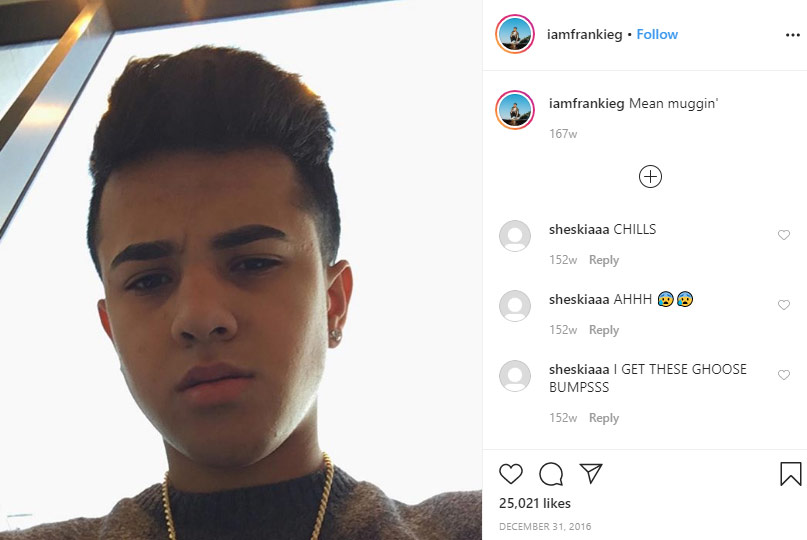 Becky is the oldest child in her parents’ family. She has three younger siblings, the most famous of which is her brother Frankie.

Frankie was 12 when his sister started a YouTube channel, which helped her to get initial popularity as a singer. The boy followed Becky’s steps and registered his account on social media. Now he is an Instagram star with 300k+ subscribers. He has launched a clothing line, called “V&V” (vibes and vintage). He is dating another social media personality, Gigi Gonzalez, who is one year younger. 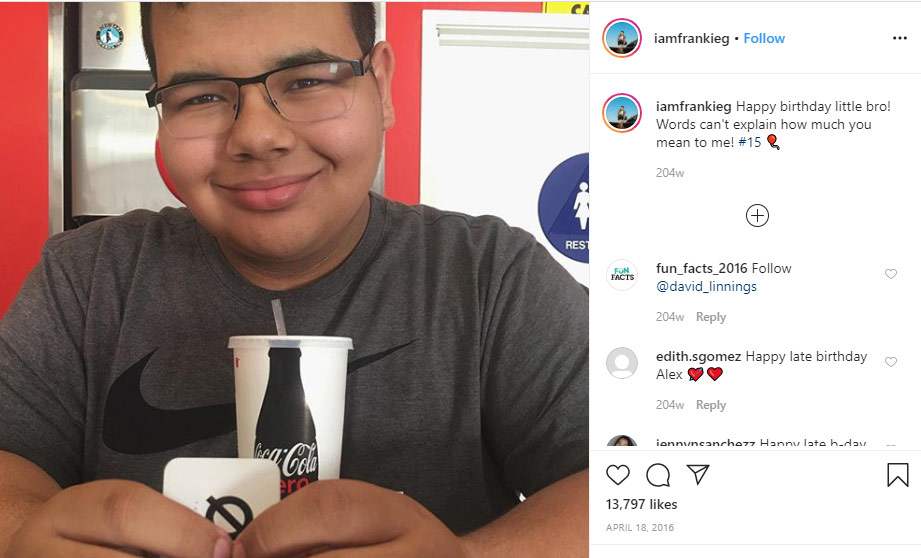 In 2015 Becky shared a very personal post on Instagram. She told me that her younger brother Alex had autism. The singer added that she liked him very much and he was a very kind person.

Now Becky marks in her calendar World Autism Awareness Day, which is on April 2 every year and supports other families, where there are kids with autism.

Stephanie is the youngest addition to Becky’s family. She is a beautiful smart girl, who previously developed her social media activity, but then deleted her accounts. Stephanie and Becky G have built close warm relationships.

Amber (younger half-sister from paternal side)

In December 2017 Becky confessed to her fans through Twitter that she has a younger half-sister from the paternal side, named Amber. As you see, Amber is just several months younger than Frankie Gomez, the second child from Becky’s family, so their biological father welcomed two babies from two different women within just one year.

Becky met Amber when the future star turned 13. Her parents discovered the truth about their family, and later she told about it to her three other full siblings. Amber and Becky stay in touch as of now.

For many people worldwide the sudden rise of an American-Mexican girl from a poor family to stardom seems a miracle. For Becky, it’s just the part of her capricious fate. From the earliest years, she felt, that she would have some special road.

Rebbeca Marie Gomez was born in the family of two almost teenagers, Frank and Alex Gomez. Her grandparents come from Jalisco, one of the Mexican states. Becky is fluent in Spanish, too.

She was a pupil at Oak Street Elementary School when her parents decided to take her to dancing classes, which were arranged just in the school building. That was her first acquaintance with the entertainment world, and she felt that it’s something she wants to do.

Several years later she posted covers on popular songs on her YouTube channel, and one of them, “Otis”, changed Becky’s life. Originally performed by Kanye West and Jay-Z, the soundtrack was re-sung by Rebbeca. She uploaded her version on YouTube, and it attracted the attention of a famous producer Dr. Luke, who immediately offered Becky the deal.

Now she is famous as a model (Becky was signed by CoverGirl trademark), as a songwriter (she co-wrote songs for other young performers, like Cody Simpson from Australia or Cher Lloyd from Great Britain. She has also starred in several short films. She voiced the main heroine Chloe in the animation film “Gnome Alone” and appeared in episodes of several TV series, such as “Austin & Ally” and “Empire”.

Becky G is not going to stop, and soon her fans will see her in many other new projects.