Is Bret Michaels a gay/bisexual?

What is Bret Michaels marital status?

Bret Michaels has never been married officially. But in 2010 he got engaged to the mother of his daughters and his long-term partner Kristi Lynn Gibson. They met in 1994 and since then had on and off relationships.

The musician proposed his loved one in front of his numerous fans in the final episode of the reality series he took part in, called “Bret Michaels: Life As I Know It”. But they didn’t get married legally and separated soon after the end of the show.

Kristi comes from Vancouver, Canada. She is an actress, known by the films “A Letter from Death Row” and “The Untold Story”. 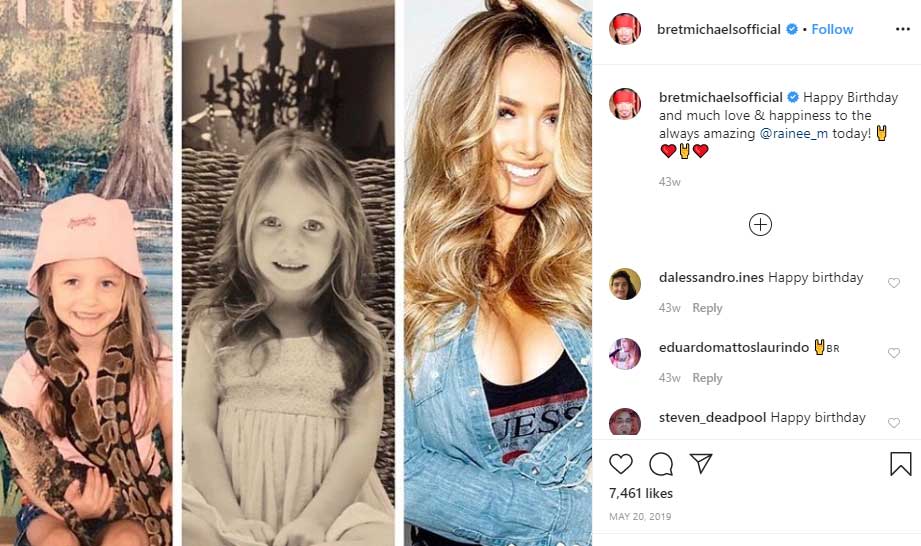 Bret enjoys the status of a father. He is proud of his sweet girls and very often devotes long posts on social media to them.

His oldest princess is named Raine Elizabeth Michaels. The younger audience has already appreciated her talent and beauty, having watched the movie “The Last Sharknado: It’s About Time”, where she had a small role as a hot bikini girl.

Raine is also a model. She started her career in the fashion industry at the age of 16. Since then she appeared in many famous fashion magazines. In 2019 she won the Swimsuit model contest, arranged by Sports Illustrated issue. 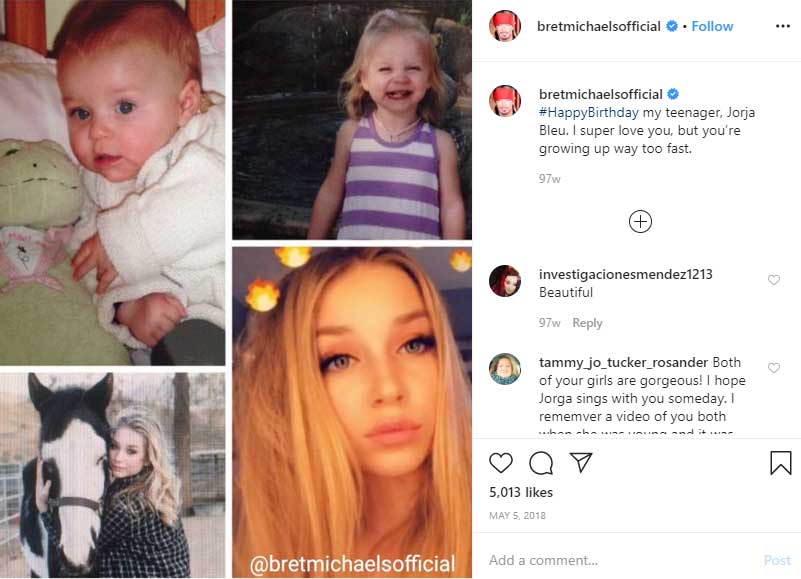 Jorja Bleu Michaels is Bret’s second daughter. Her father adores her and spends a lot of time with her. She has appeared in his reality series “Bret Michaels: Life As I Know It”. In 2018 she tried her hand in acting again and acted in Shane Stanley’s drama “Mistrust”.

Who are Bret Michaels parents?

Bret Michaels’ father was his role model and his best friend. He passed away in August 2019 and that day became one of the hardest in Bret’s life. He was very ill during the last weeks of his life. “My body is weak, but my spirit is strong”, he used to tell his son.

Wallace spent a wonderful successful life. He was born in 1934 in Pennsylvania. His parents’ names were Wallace Sychak Jr. and Marie Myers. He has two brothers and a sister.

The man was a holder of the bachelor’s degree, got into the Slippery Rock University. During many years he worked hard to provide his family for everything they needed. Mr. Sychak was the Korean War veteran. His last place of work was at the US Naval Depot.

Bret’s parents divorced when he was still a kid, but his father didn’t disappear from his life. He was a great dad for Bret and his sisters, Michele and Nicole. After the divorce from his first wife, the man re-married Wilma Jean Sychak and they created a great family, which was strong and happy for 36 years till Wallace’s death. He was a great stepfather to Jean’s children from previous marriage – Kathy, Karen, and Kevin. 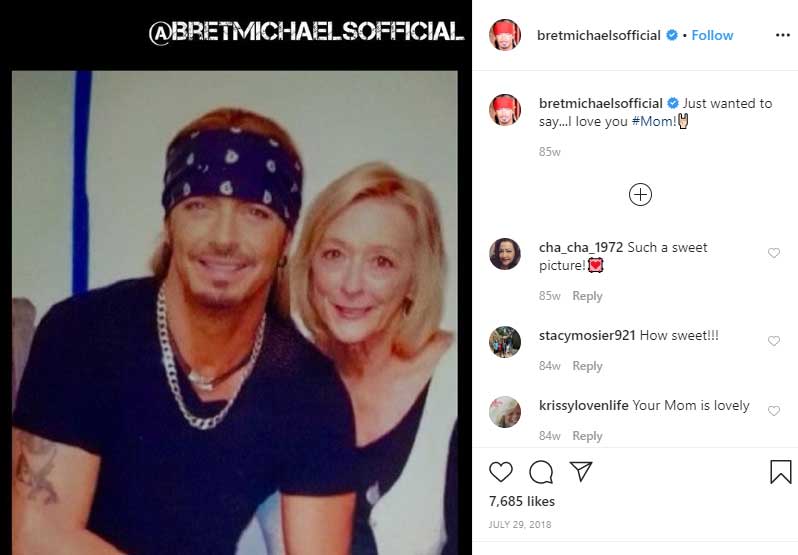 Bret Michaels’s mother maintains her privacy and keeps away from public attention. Nevertheless, her face is known to the wide audience due to his son, who posts her pictures on his Instagram account.

Marjorie Ann Sychak raised three children – a son Bret and two daughters, Michelle and Nicole. As of 2020, she is single and lives in Las Cruces, NM. 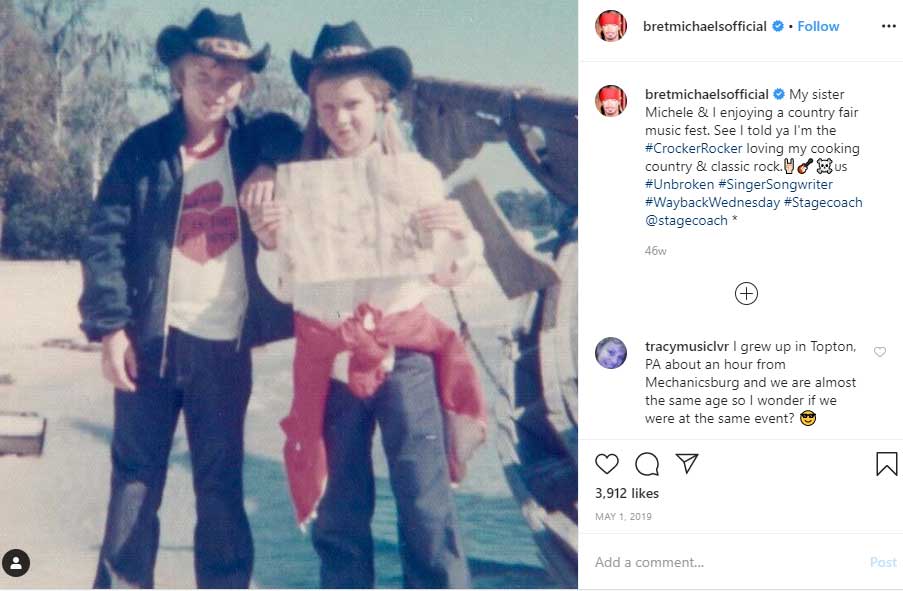 Bret posts lots of childhood pictures, where he plays baseball or holds the puppy, and his younger sister Michelle stays by his side. That means, they used to spend a lot of time together and were big friends.

Till now Michelle and her brother are closely-knitted, although they live far from one another and can’t see each other very often.

She is based in Omaha, Nebraska. The woman works as a cleaning supervisor. She is a big pet lover. The woman owns several dogs. 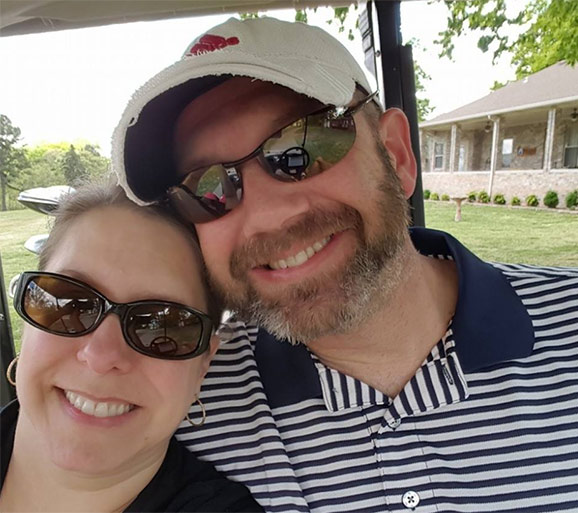 Bret was blessed with another younger sister, Nicole Sychak. The woman lives in Omaha, NE as of 2020 and works at the Children’s Hospital. She is in relationships with a handsome man, whose name is not publicized.

Bret Michaels is a celebrated performer, the long-term member of “Poison” the glamorous rock group, whose music makes people move and refreshes their minds.

He entered this world in Butler, PA. He was the oldest of three children in the family of Wallace and Marjorie Sychak. At the age of 6, he was diagnosed with Diabetes Type 1. The illness made the kid’s life hard – he had to fulfill all the necessary rules to feel good. The boy had to refuse from many dishes he liked and his peers used to eat. Music saved him from a bad mood when he wanted to forget about his health disorder. He formed the first hard rock band at a young age. Later it disbanded, but Bret created another one, which he named “Paris”. Four young musicians-band members gained initial popularity and decided to promote their group in Los Angeles. They moved from Pennsylvania to California and started to perform there, having changed the name of their band to “Poison”.

Now Bret Michaels is celebrated as the band singer, solo singer and occasional actor. He is also a philanthropist and a devoted father of two talented beautiful daughters.