Is Buddy Valastro a gay/bisexual?

What is Buddy Valastro marital status?

Who is Buddy Valastro wife? 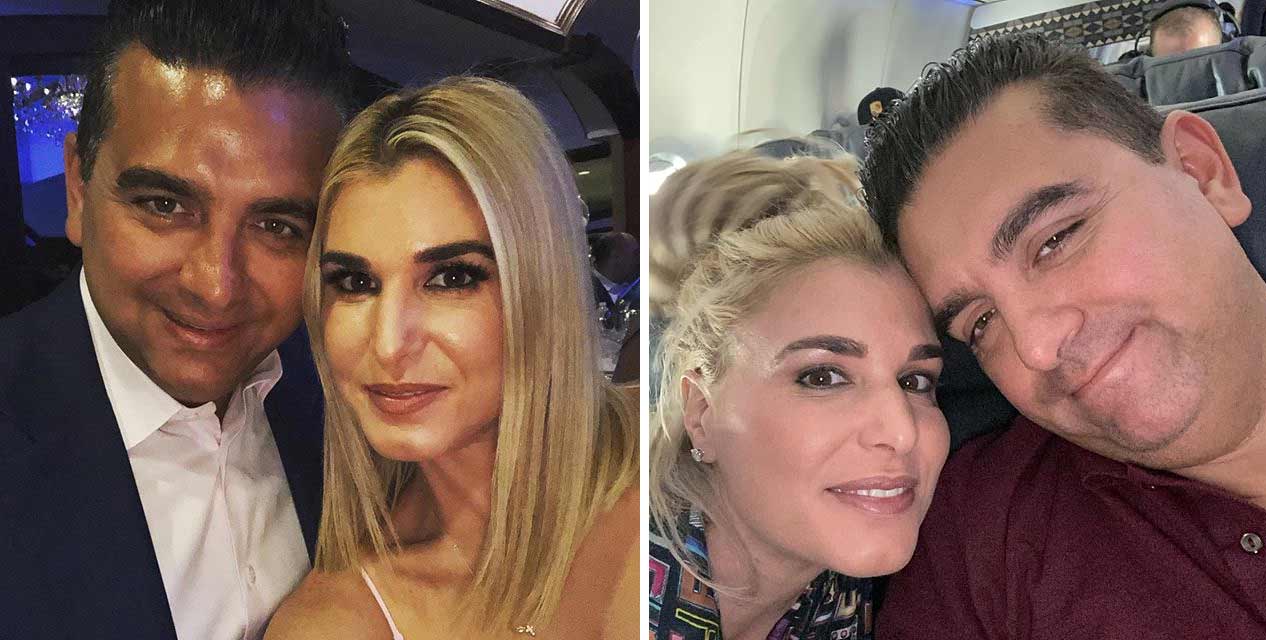 Buddy stresses the fact the main secret of his success is a cohesive family team. And his wife is one of his most devoted supporters. Her birth name is Elisabetta Belgiovine, but now she is known under the name Lisa Valastro, too.

She was born in the USA in the family of Gloria and Mauro Belgiovine. Her parents are Italian immigrants. She has a brother Maurizo Belgiovine and one more sibling. Elisabetta is a well-educated woman. After graduation from college she worked at a biotechnological company.

Lisa quit her career in the early 2000s after meeting Buddy. They got married on October 14, 2001. Mr. and Mrs. Valastro became parents of four adorable kids. Besides, they work side by side, developing their culinary business. Lisa made regular appearances on the TSL show “Cake Boss”. 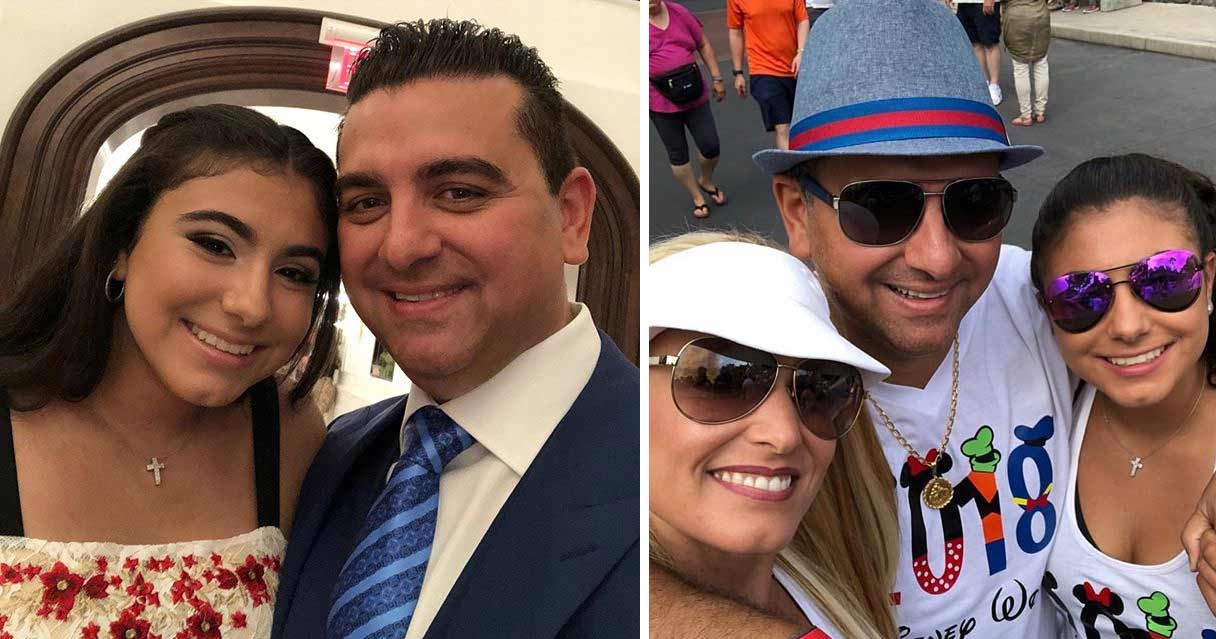 Lisa and Buddy were blessed with their first child – a beautiful girl – in spring, 2003. They named their daughter Sofia. Having gained initial popularity as a daughter of two TV stars, she cemented it with her talent. The girl inherited her father’s baking skills. She hosts Lil’ Cake Boss Cooks videos, which gained millions of views on YouTube.

Buddy Valastro III is the first son of the famous pastry chef. In his numerous interviews, Buddy Sr. told, that he dreamed to see all his kids, including his oldest son and namesake, in a family business. And the boy meets the expectations of his father. He spends a lot of time at Carlo’s Bakery kitchen and decorates the cakes so skillfully. There are some Instagram videos, uploaded by his dad, which prove it.

Besides, Buddy is a high school pupil. In addition to cooking, he loves fishing. 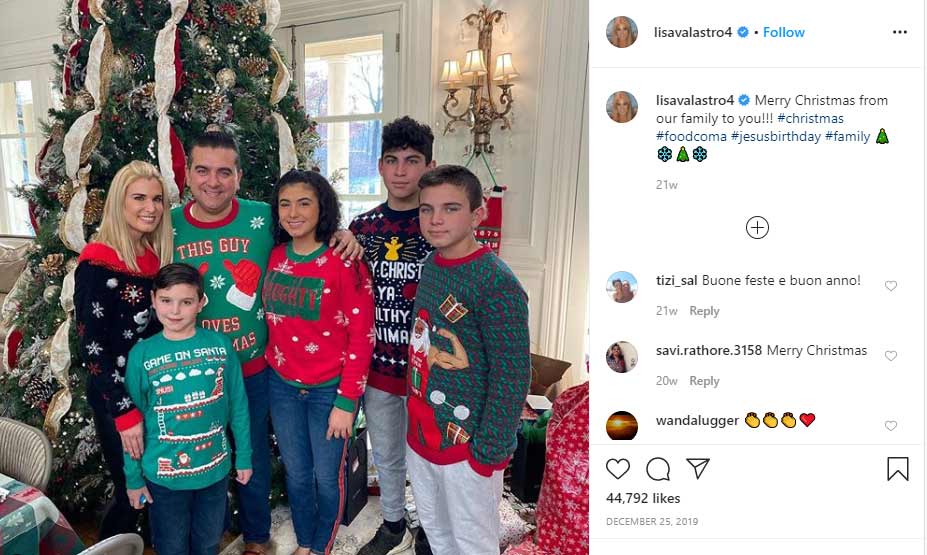 In 2007 Lisa and Buddy welcomed their third child – a boy, named Marco. He is not a public person, but his family is too popular, so it’s hard for him to avoid publicity. He made just a few appearances on the show “Cake Boss”, and then at the age of 6 he accompanied his dad on the episode of “Fox and Friends”.

Now he joins his school studying with developing his Tik Tok account. Besides, Marco is an Instagram star with 47k+ followers. 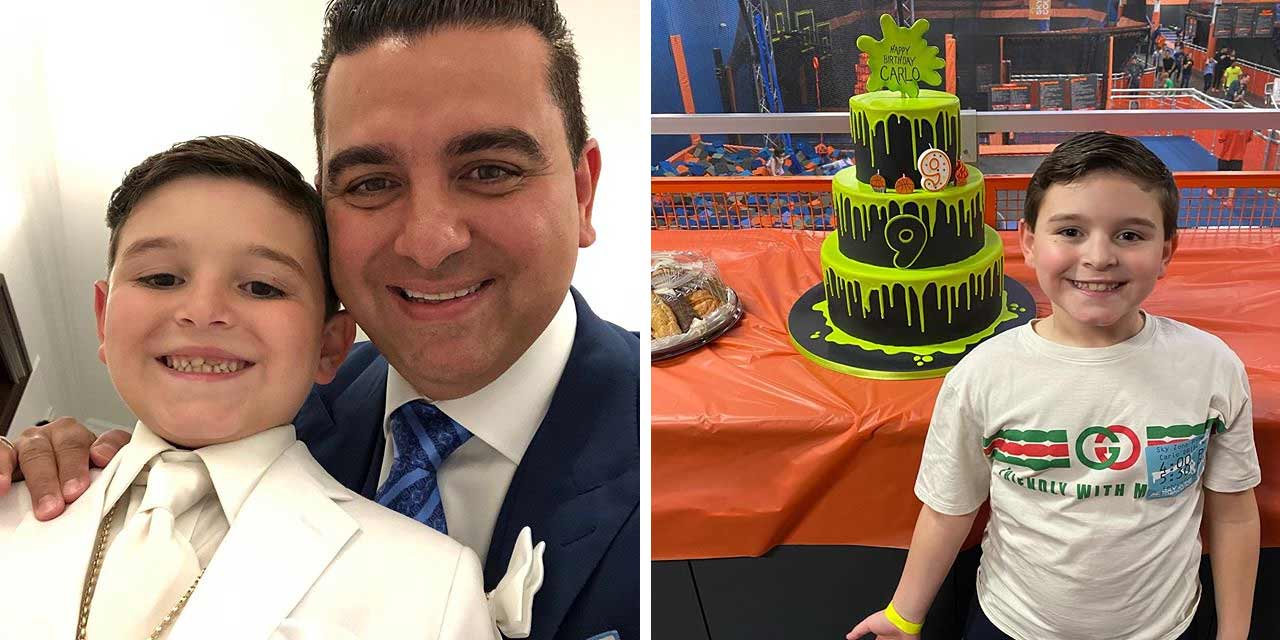 Carlo Valastro is the youngest boy in the big family of famous chefs. He shares his name with the café “Carlo’s Bakery”. Carlo appears with his parents and siblings at public events from time to time. He is a frequent guest on his mother’s and father’s social media accounts. His hobby is soccer.

Who are Buddy Valastro parents?

Buddy is a perfect father for his kids because he had a great role model in front of him. His father, Mr. Bartolo Valastro Sr., was a great parent, faithful husband, and successful businessman. It was he, who founded the legendary “Carlo’s Bake Shop”, which became the first stone in the foundation of his empire.

The reality star’s dad passed away, being just 54 years old. The reason for his early death was lung cancer. Thus, at the age of 17 Buddy became the only man in his family, and he put lots of effort to make life of his mother and sisters carefree.

He still adores his father and devotes touching posts on social media to him. 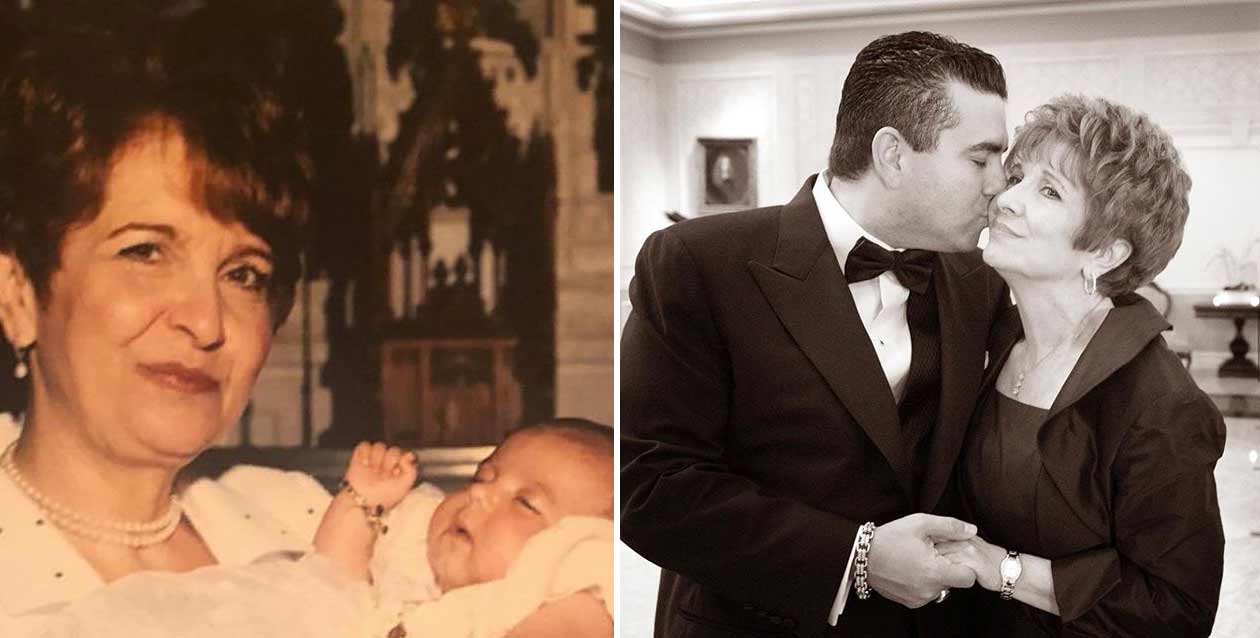 Buddy and his mother were so close, that’s why her death in 2017 was a severe blow to him. She passed away at the age of 69 from a hard disease, called amyotrophic lateral sclerosis (ALS). To support other patients with the same diagnoses, Buddy founded “Mama Mary Foundation”.

Her birth name was Mary Tubito. She was born in Italy, but at the age of six her parents moved her to the USA. She spent the major part of her life in New Jersey. During many years she was a faithful wife of Bartolo Valastro Sr. and mother of his five kids. She worked in their family bakery until her retirement in 2010.

Two years after the retirement she was diagnosed with ALS. She struggled with the terrible disease for 7 years and lost the battle. She went down the aisles the second time with Sergio Picinich just a couple of months before her tragic departure. 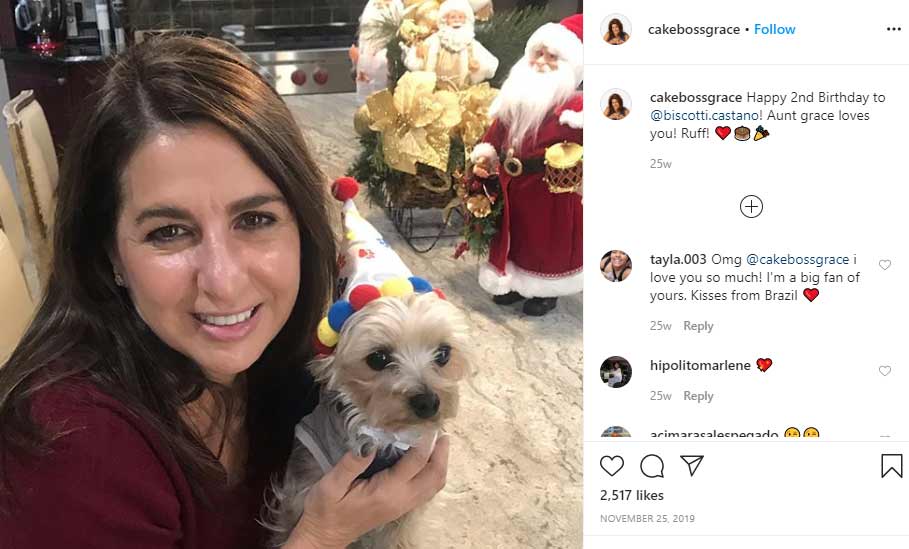 Yes, Buddy has been surrounded by beautiful smart ladies since the moment of his birth. He has four older sisters, and they pampered a lot with their little brother.

Grace is the oldest child in the Valastro family. She is also a media personality, whose face has become famous after constant appearances on the Cake Boss show.

She is busy in the family business. The woman works as the front counter manager. She is also responsible for selling merchandise goods.

Grace is married to a chef Joe Faugno. They parented a son Robert and a daughter Bartolina. Their daughter has Epilepsy. Grace and her husband Joe spent a lot of money to help people with this health issue.

The New Jersey-born Maddalena Castano stood by her brother’s side when he began saving the family business after their father’s death. Maddalena has become a celebrity after the release of the TLC reality series. She is also the front desk worker at their family café.

Buddy’s sister is a married woman. She is a mother to two sons and a daughter. 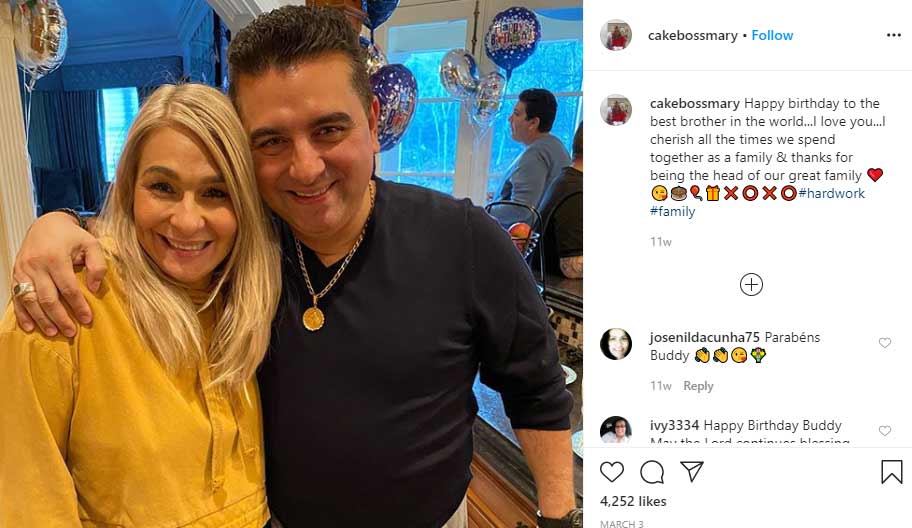 The third oldest sister of Buddy Valastro is a part of the family business, too. She was born and raised in Little Ferry, New Jersey and at a very early age was involved in her parents’ business. Mary was regular on her brother’s reality series “Cake Boss”, but she was fired in the fifth season. Later the woman was accepted to the show again.

Mary is married. She is a mother of three kids. 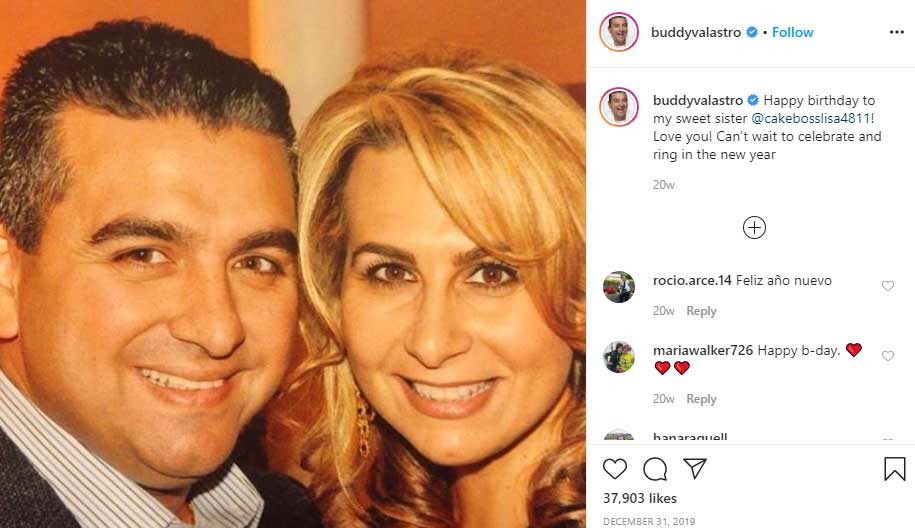 Very often Buddy’s youngest sister is mixed with his wife. Nevertheless, they are two different ladies, which have just one thing in common – their love for baking.

Lisa serves as the store front worker at Carlo’s Bakery. She also featured on Cake Boss reality series. The woman was married to a pastry chef Remigio Gonzalez. They parented three children.

Bartolo Valastro Jr. comes from the cozy town of Hoboken in New Jersey. He is a fourth-generation baker and well-known pastry chef, who owns the internationally famous “Carlo’s Bakery” in New York.

Buddy’s name is incredibly popular among the lovers of good baking. No wonder, because this man is talented and well-prepared for this job. His father and grandfathers were great chefs, too. In 1910 his ancestors came from Italy to the USA and founded the first bakery there. Since then the members of the Valastro family play the first violin in the world of delicious cakes.

Buddy was baking super soft cupcakes, decorating the huge cakes, and aerating the cream at a tender age of 11 and did it even better, than the professional chefs. He was just 17 when he’s had to replace his late father and become an executive in his family business.

Now he is famous all over the world as a person, who stands near the oven the major part of his day. Besides, he finds the time for holding master classes, giving interviews, and making constant appearances on various television shows. His face has become recognizable after the release of the TV show “Cake Boss”. He is also the author of several culinary books, including “Family Celebrations with the Cake Boss” and some others.