Is Chloe Grace Moretz a lesbian/bisexual?

Who are Chloe Grace Moretz parents? 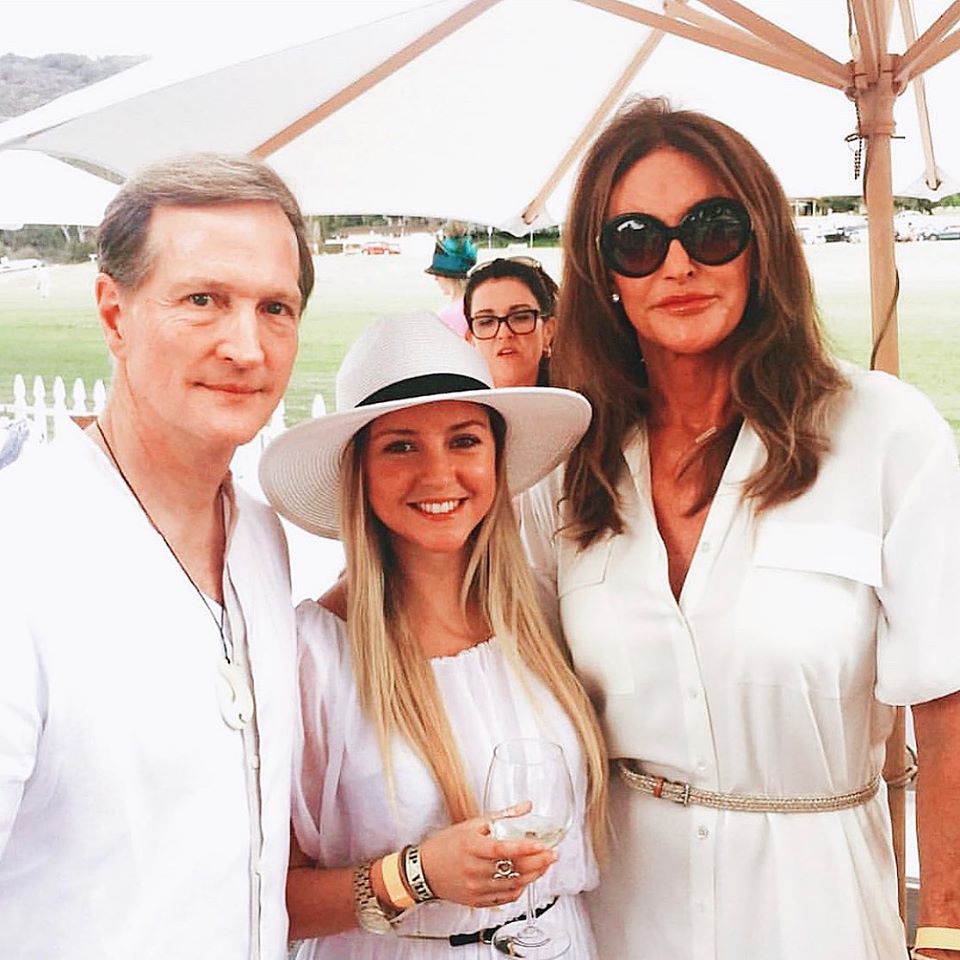 Unfortunately, Chloe is not close to her father. On Father’s Day, she thanks for the love and care about her to her brothers, not to him. She has a reason to be estranged from him – in the middle 2000s he left the family and moved to the house of Paris Hilton’s aunt.

McCoy Moretz was born in Catawba, North Carolina. His parents are Kathleen and Charles Moretz. McCoy was a great pupil at school. He liked Chemistry and Biology most of all other subjects. After graduation, he entered the Medical College of Georgia and completed his education at Emory University. Soon he started to practice as a plastic surgeon.

His talent helped him to become successful in this area. Many people came from different cities to correct the shape of the nose or ear in his clinics. Gradually, he became famous and rich.

But something went wrong, and in 2005 Mr. Moretz and his then-wife Teri filed for bankruptcy. Around that time Teri was diagnosed with cancer. But that didn’t stop McCoy from leaving his family – he fell in love with the ex member of the Hilton family.

Neither his daughter nor his sons cross their ways with him as of now.

Teri Duke, who previously was known under the name “Teri Moretz”, gained wide popularity as a mother of an aspiring Hollywood star Chloe Grace Moretz. In one of her interviews, the movie star confessed, that her mom Teri is very strict as a parent. She didn’t allow Chloe to waste the money she earned for her films on designer clothes etc.

Teri was born in USA in the family of Edward and Janette Duke. After school, she studied medicine at the college and then was working as a nurse. At work, she crossed her ways with the talented plastic surgeon McCoy Moretz. They fell in love with one another and got married soon.

After the birth of 5 kids, Teri focused her mind on bringing them up. When Chloe started the career of an actress, her mom became her manager. Mrs. Moretz produced several films, including “Hick” and “November Criminals”, released respectively in 2011 and 2017.

In 2005 she divorced from her husband and father of her kids McCoy because of his cheating with another woman. Teri is a kidney cancer survivor and a real hero for her daughter and sons. 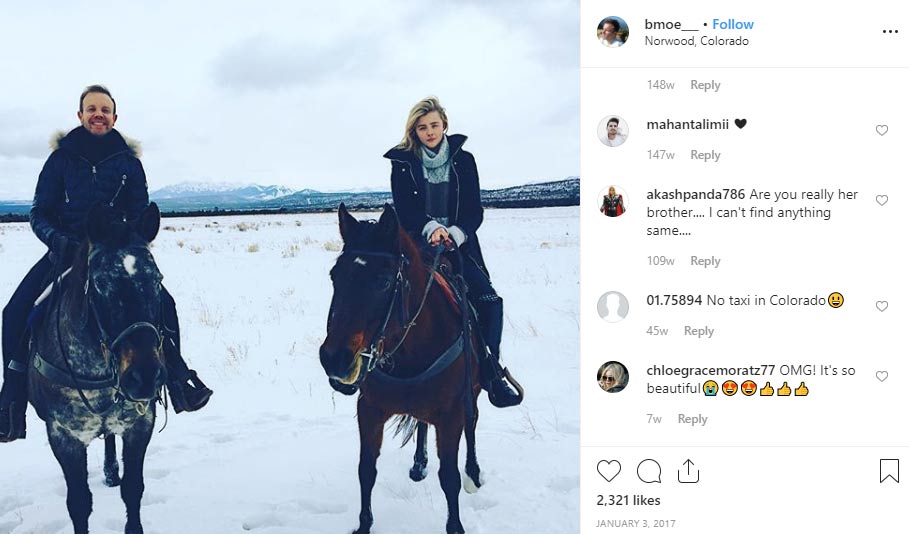 After McCoy Moretz left the family to start a new chapter in his life with another woman, Brandon, the oldest brother of Chloe, became the patriarch and protector of their little team.

Brandon is very close with his sister and brothers. He spends a lot of time with them. From the young man’s Instagram, it’s obvious, that he likes long family dinners. By the way, Brandon Moretz is a sweet tooth. Very often he is depicted on photos with a big piece of cake in his hands.

Brandon was born and raised in Atlanta, Georgia. After graduation from Cartersville High School, he entered the University of Georgia, where he studied microbiology. He founded the company “Moretz Mgmt”, whose activity is connected with plastic surgery. Brandon lives in Los Angeles as of now. 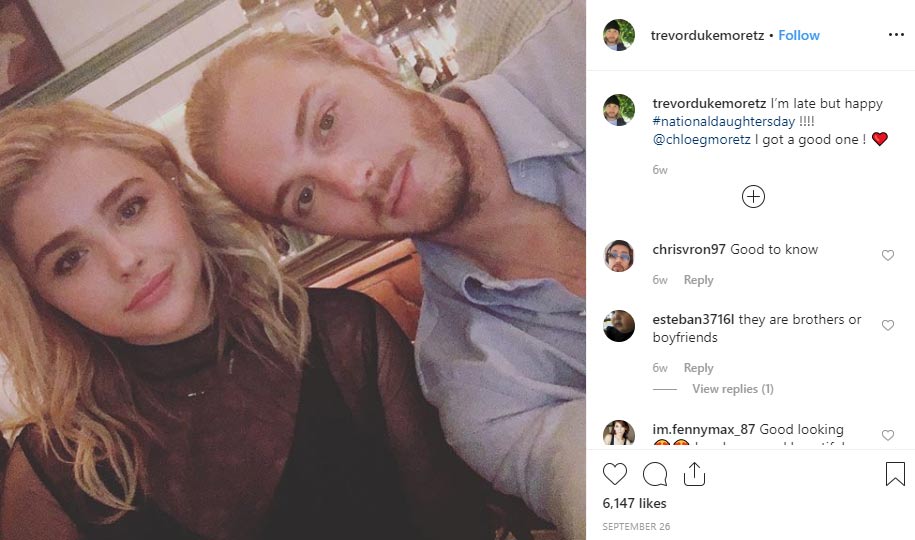 Trevor is Chloe’s older brother, a close friend and her acting coach. In one of her interviews, the actress confessed that Trevor and another brother, Colin both came out as gays. They taught her to be tolerant with the representatives of the LGBT community.

He was born in Atlanta, Georgia, but spent the major part of his life in Los Angeles, CA. He studied at Beverly Hills High School and also attended classes at Professional Performing Arts School.

At school, Trevor was bullied, mostly because of his sexual orientation. But that made him even stronger and helped to find his voice.

Nowadays he works as a film producer and actor. He has a dog, named Jaxon. He is in long-term relationships with a man named Nick Franger. 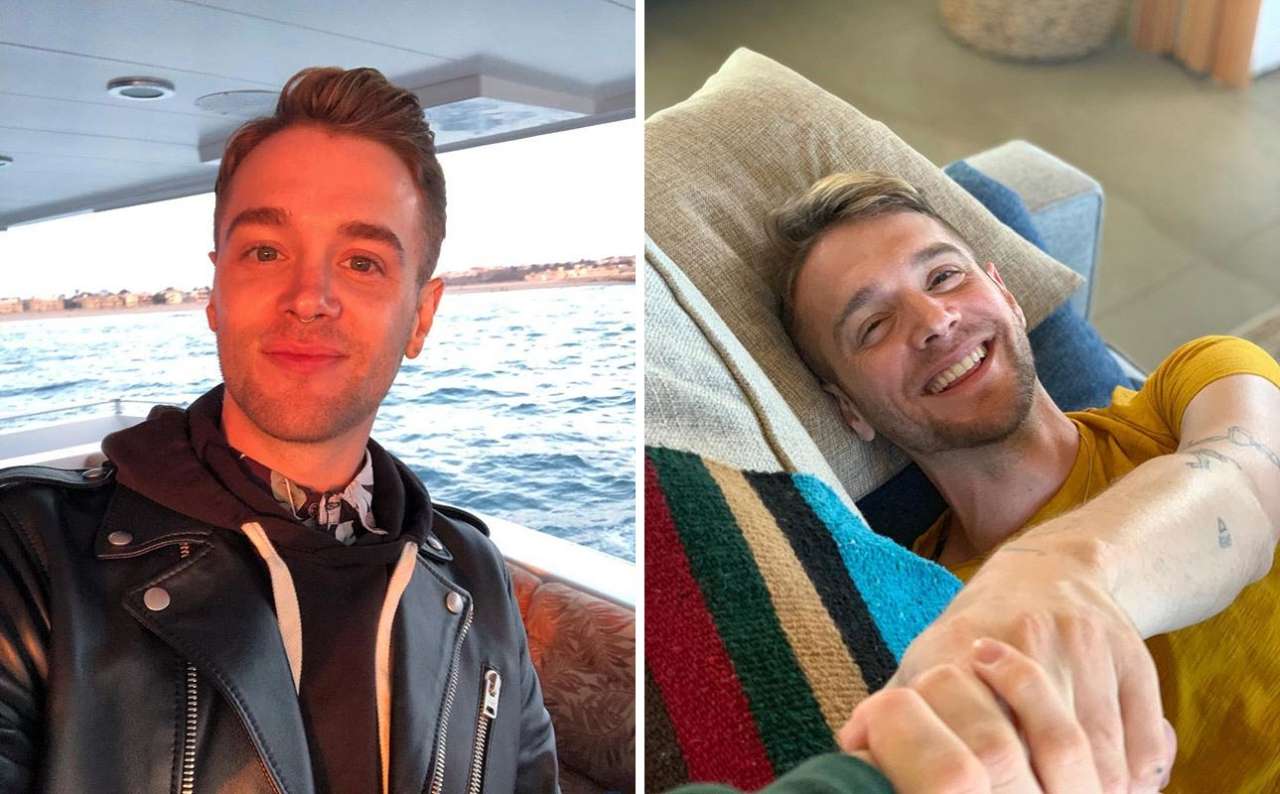 Colin Edward Charles Moretz is Chloe’s other brother. He is an open gay, too. Like his other brothers, he is a very family-oriented person. He lives in Los Angeles. Colin’s heart is not empty – he has a boyfriend. The young man is a pet lover. He owns a dog.

Ethan is the youngest boy in the Moretz family. He graduated from Beverly Hills High School and then attended the University of San Diego. He is the only person in Chloe’s family, who doesn’t live in LA – the young man resides in Austin, Texas. He works as a marketer at Dell Technologies Company. Ethan has a girlfriend, named Kirsten Heard. She is a singer.

Now Chloe Grace Moretz is a talented theater and movie actress, voice actress and an ex-Max Mara face. She was born in a family of medical workers and has four older brothers.

The girl followed the example of her older brother Trevor (he is busy in movie industry) and made up her mind to become an actress. In 2002 she moved with her mother and brother Trevor to New York, where the latter one was attending the school of performing arts. Chloe watched him when he was learning the monologues at home. Around that time she decided to become an actress.

Soon Chloe’s mother and father decided to move their big family to Los Angeles. Thus, the girl got an opportunity to visit auditions – and she used it. Very soon the cute blonde girl, who could change so skillfully in spite of her very young age, got her first acting job. She appeared in two episodes of “The Guardian” and then acted in “Desperate Housewives”. In the latter project, she portrayed the sweet little schoolgirl, who attended the model classes, arranged by Eva Longoria’s screen heroine.

After that Ms. Moretz moved her way to the big screen and appeared in “The Amityville Horror”, which brought the girl her first professional success (in spite of her so young age). For an excellent play as Chelsea Lutz, she got the Young Artist Award nomination.

Gradually, Chloe was growing up and every year her resume was getting more extensive. She acted in “The Poker House”, portrayed Mindy in “Kick-Ass” and played a complex role in the fantasy “If I Stay”.

The actress participated in lots of successful films and TV series, which turned her into an aspiring Hollywood star. Among her recent projects, there’s a voice work for the animated film “The Addams Family”.