Is Chuck Norris a gay/bisexual?

What is Chuck Norris marital status?

Who is Chuck Norris wife? 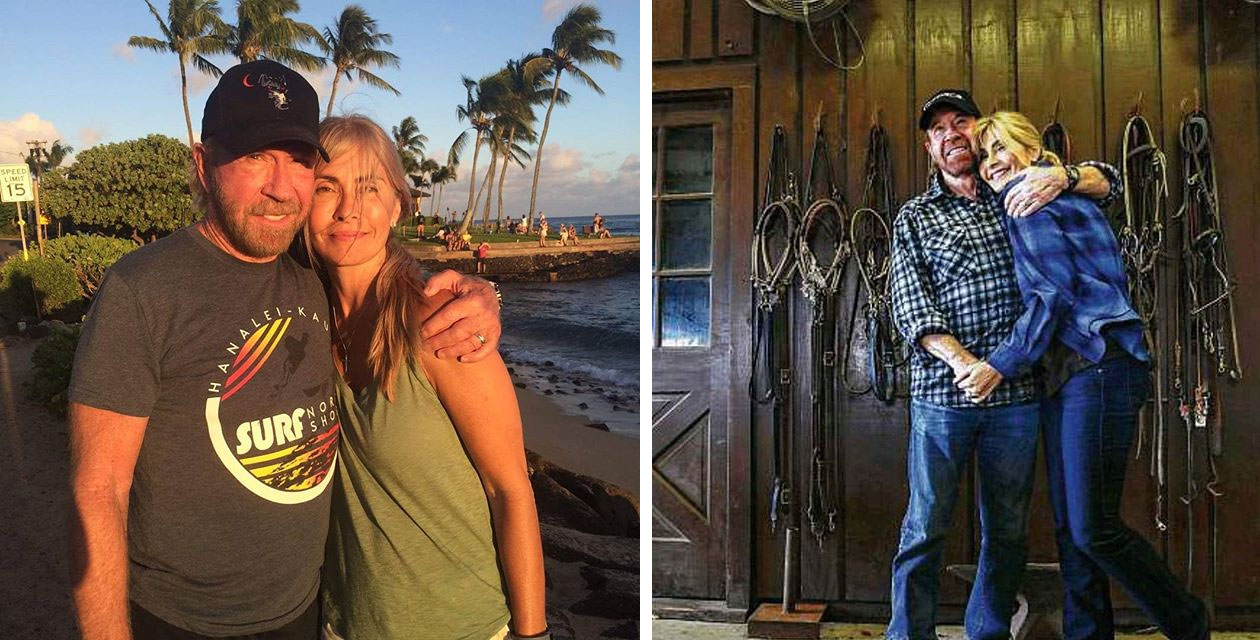 They say that a talented person must be lonely to achieve the potential, but Gena O’Kelley-Norris proves, that it’s not right. She rose to fame as a wife of a talented actor, businessman and martial artist Chuck Norris, and now her face is known to anyone on the planet.

She was born in the family of Alan and Annette O’Kelley and was raised in California alongside 3 siblings. She started her career as a model and being 34-year-old beauty she crossed her ways with Chuck Norris, who was 23 years her older. They tied a knot a year later and soon welcomed 2 kids – twins Dakota and Danilee. She is a stepmother to Chuck’s three kids from previous relationships. 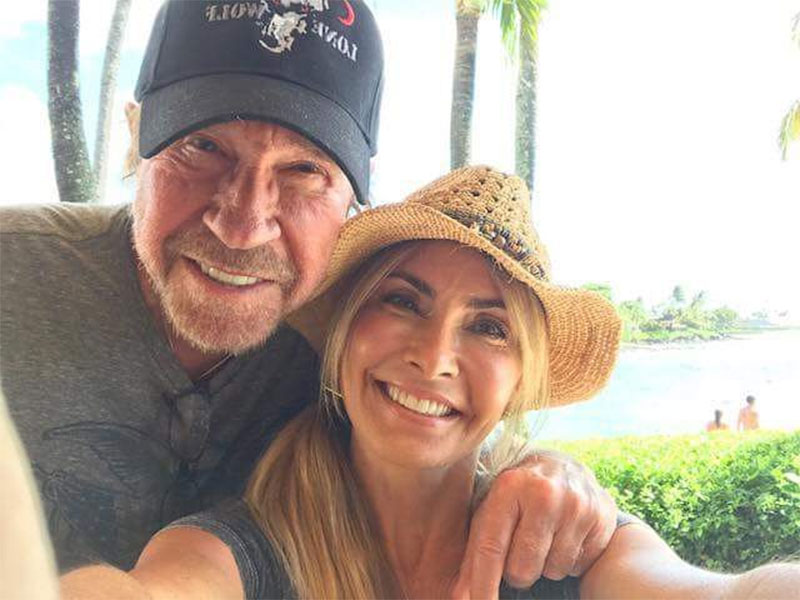 Gena is not just a wife of a celebrity, she is also a business lady and an occasional TV personality, who has appeared in several shows, such as “The O’Reilly Factor”, “Praise the Lord” and some others.

Unfortunately, Gena O’Kelley had some serious health issues in the past. In 2012 Mr. Norris left the movie industry to care about his wife, who was really close to death. The woman did an MRI scan, which caused severe pain and kidney problems. The woman and her husband think, that she was “poisoned” by gadolinium injections, which she received while making the scan. 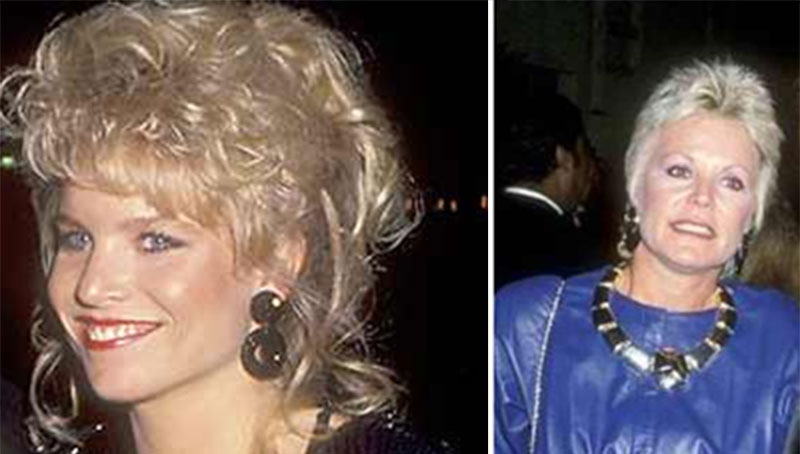 Chuck Norris is a famous actor and a hot man, whose personal life had never been too scandalous. Just a few women can boast that they caught his heart, and one of them is his ex-wife Diane Holechek. They attended the same school and fell in love at a very tender age. Chuck proposed his school sweetheart in a letter and soon they tied a knot in 1958 in Torrance, CA. The couple had a fast traditional ceremony and then the four-day honeymoon. After that, the brand-new husband was sent to the service at the U.S. Air Force.

Norris returned home in 1963, and soon the couple welcomed their first child – the son Mike. Two years later they welcomed another one – Eric. In spite of the fact, that Chuck tried to be the best father for his sons and the best husband for Diane, still he made one mistake – cheated his wife with a woman, named Johanna, and welcomed a daughter Dina with her.

After 30 years of marriage, Diane and Chuck filed for divorce. The reason wasn’t publicized, but in 1989 the gifted actor became lonely again. 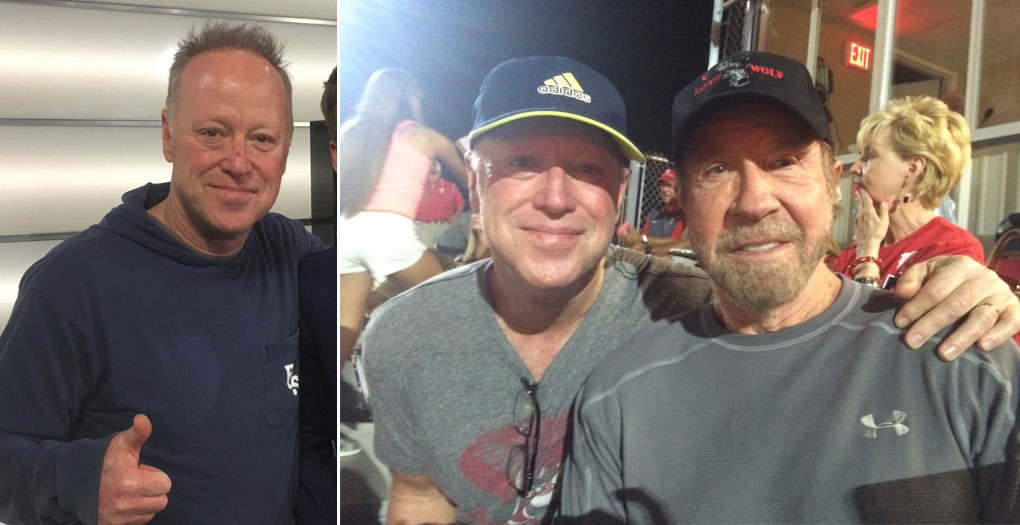 Michael Ray Norris is not the alien in the movie industry, too. He followed his father’s rout and became an actor and film director with more than 30 credits in his film list. The man has already starred in “Babylon 5”, “Carnival of Wolves” and “AmeriGeddon”, which he also directed.

He is married to Valerie Gallo and has three kids with her. They are not just life partners, but also business partners, who run a film studio, named “2nd Fiddle Entertainment”. 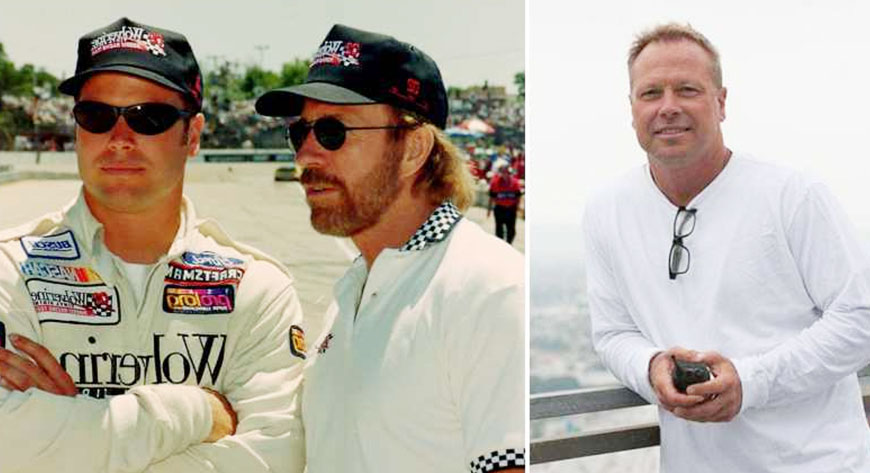 Eric Scott Norris is the second son of the legendary actor and his first wife, Diane. The man rose to fame as an actor, stuntman and race car driver.

Born in Redondo Beach, CA, he practiced karate since the earliest years and appeared on the big screen for the first time in 1986. His most popular screen projects include “Universal Soldier”, “Walker, Texas Ranger” and “Still the King”.

Among his other achievements is participation in Nascar Grand National Championship and fathering 4 kids with his beloved wife Stephanie. 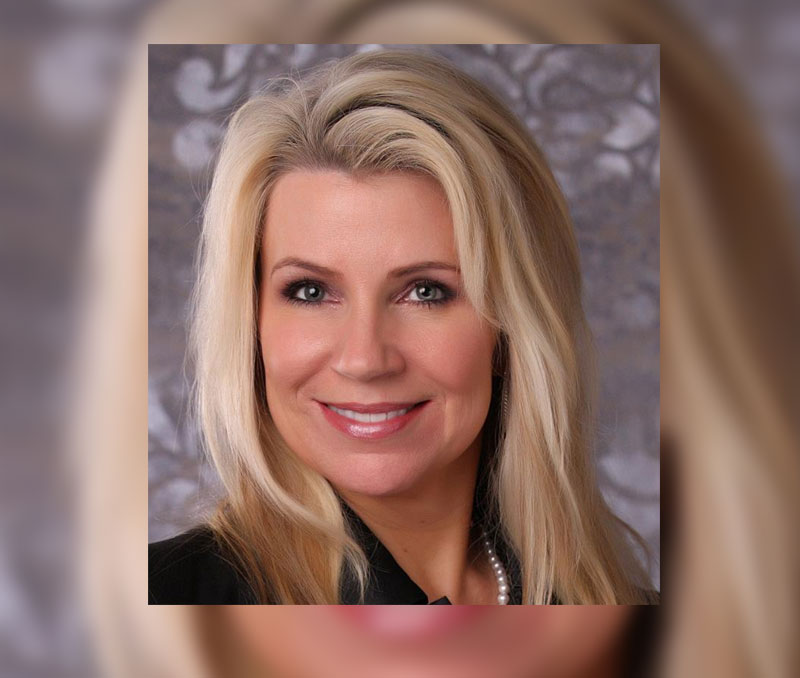 The Texas Ranger boasts with the reputation of a family man. Although he was married twice, he had never been caught by paparazzi in the company of beautiful women, like many other male stars. That’s why the actor’s fans were really shocked when they heard about Chuck’s daughter, whom he had with a beauty, named Johanna, while he was married to his first wife.

In fact, then Norris served in the U. S. Air Forces, and his military unit was housed in California. During that stay, he met Johanna, and they immediately fell in love. Chuck and his occasional girlfriend had just a couple of dates, and then they parted their ways. The girl soon married another man and gave birth to a baby daughter Dina.

During many years the actor knew nothing about her. His daughter considered her mother’s husband as her biological father. But then she learned the truth, and much time passed until she dared to ask her biological father for a meeting. Thus, Chuck met his 26-year-old daughter and “wasn’t disappointed”, as he said.

Now Dina’s surname is DiCiolli, she resides in Dallas, TX and has a son, named Dante. 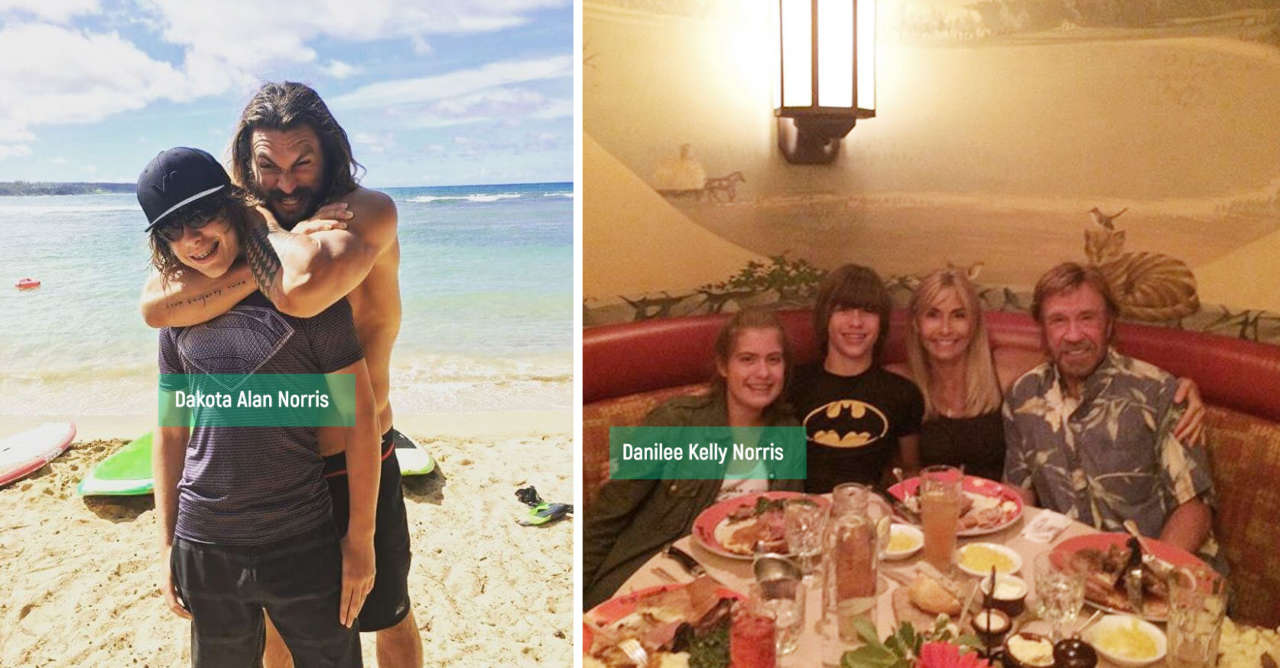 Chuck’s son Dakota and daughter Danilee entered this world when the actor has already turned 61, and their birth was a miracle for Mr. Norris and his wife Gena.

The twins were born 2 months earlier than they were expected, and during the first months of their life, they stayed in a hospital. But now they have already turned into two beautiful young people with some acting experience. Both twins appeared in an episode of the show “Yes, Dear”, and Danilee also portrayed once her father’s screen daughter in “Walker, Texas Ranger”.

Who are Chuck Norris parents?

Chuck tries to be a good father to all his kids, while his dad wasn’t so perfect as a parent. Ray Dee Norris had Irish roots; he was a handsome and strong man, who served in the army during the cruel years of war. He returned home after an injury and married the beauty, named Wilma.

The couple gave birth to three great sons, but happiness didn’t knock on their door. Ray was a heavy drinker; he spent the whole miserable salary, which he earned as a mechanic and a bus driver, for alcohol.  Soon the future actor’s parents divorced and Chuck was raised mostly by his mother.

Ray died at the age of 53 and was buried at Marietta city cemetery in Oklahoma. 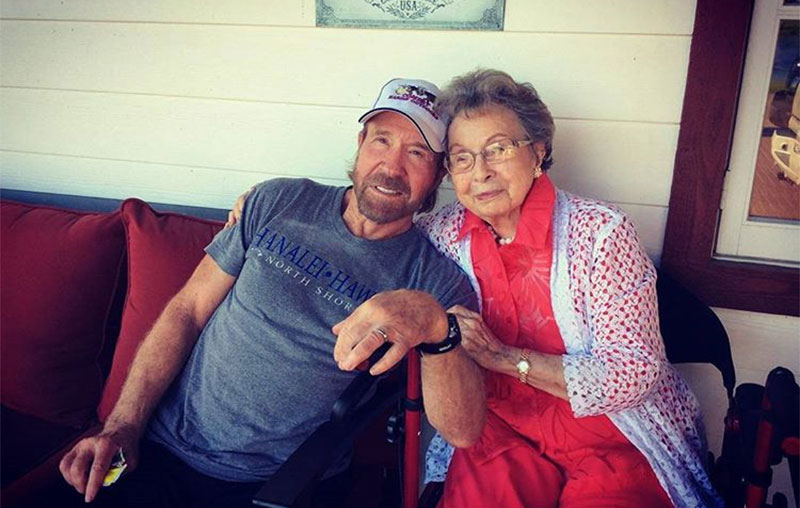 Chuck’s mother comes from the Cherokee Nation. She struggled a lot on her way to a calm and comfortable life, but she enjoys it now. The woman didn’t get a college education, but as she says, she was taught at the school of life. The woman wasn’t happy with her first husband Ray Norris, and she decided to divorce from him. She wasn’t afraid of becoming a single parent and of total poverty – at first, Wilma and her sons lived in a trailer. But then she remarried a kind man, named George Knight. He cared about Wilma and her kids, and actually, it was he, who brought up a star Chuck Norris. He taught the boy to love sports and to earn money. Since his teens, Chuck worked at various odd jobs, and at the age of 16 had already bought his first car.

Wilma Scarberry-Knight told her story in a book “Acts of Kindness”, which he co-authored with Todd DuBord. 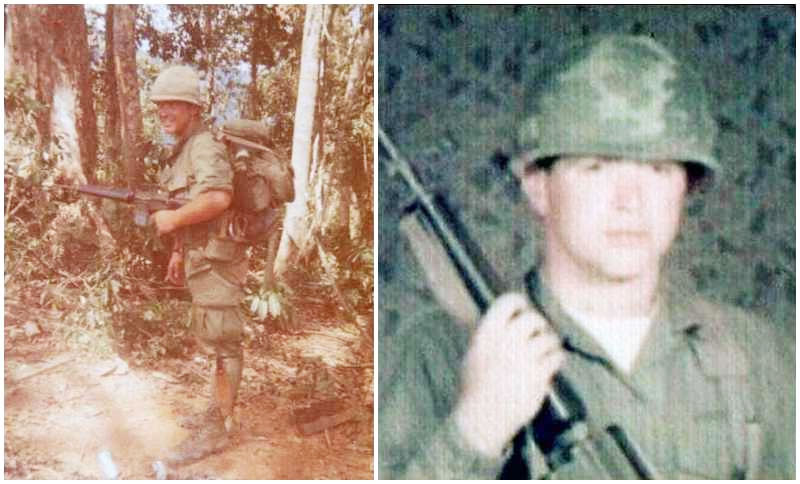 Wieland was one of Chuck’s younger brothers, who was killed in Vietnam during the years of war. The brave young man was awarded with a medal. His brothers still remember him and devoted him the third part of movie “Missing In Action”. 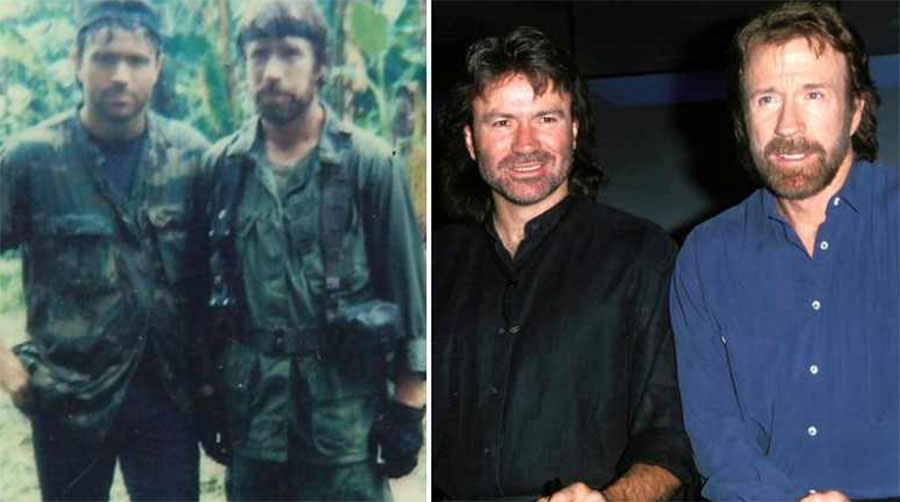 Aaron is Chuck’s younger brother, who is also famous in the movie industry. He is a former stuntman, actor, producer, and film director, known by such screen works, as “The Cutter”, “A Force of One” and others.

Like his brothers, he served in the U. S. Army in his young years and then started the career in the movie industry as a stuntman. In 1988 he directed his first film, named “Braddock: Missing in Action III”.

The famous actor, film director, martial artist, and businessman, he gained international popularity as a star of action movies. Chuck is known to his fans by such films as “Invasion U.S.A.”, “The Hitman”, “The Cutter” and by the TV show “Walker, Texas Ranger”.

In addition to his accolades as an actor, he is also famous as a devoted family man. Let’s read about people, whom Chuck Norris considers (or considered) as a family.