Is Evelyn Lozada a lesbian/bisexual?

What is Evelyn Lozada marital status? 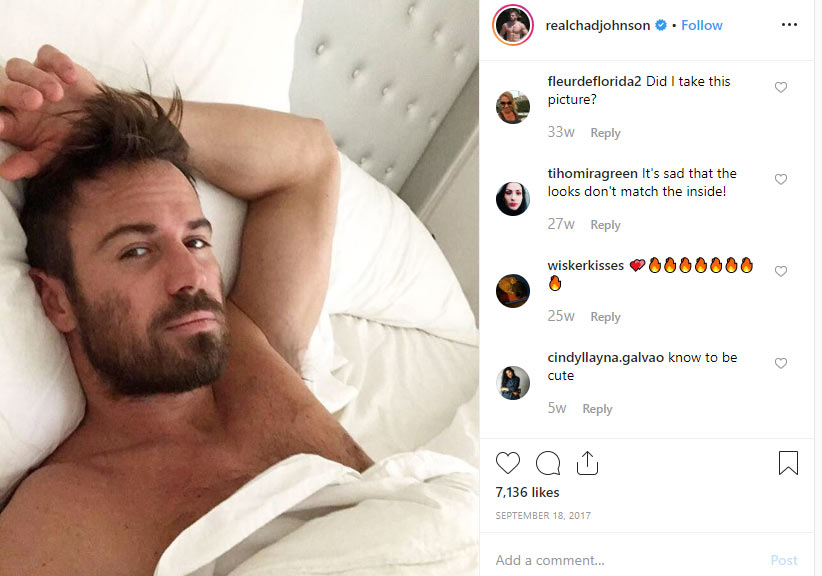 Chad Johnson, also known under the name Chad Ochocinco (in 2008 he decided to change his name from Johnson to Ochocinco, but in 2011 the man canceled the change and returned his birth name), was married to Evelyn Lozada during three months only. Lozada has a hard memory of this marriage.

Chad started to play American football during his years in Santa Monica College. His talent of an athlete was obvious, and in 2001 he turned from a college amateur into a professional player. The young man was drafted by the Cincinnati Bengals.

His wonderful career lasted from 2001 till 2015. During these years Chad played for 4 football teams and was the participant of NFL team during 11 seasons.

He dated Evelyn Lozada during just a month when the athlete proposed her with an expensive engagement ring. They wedded on July 4, 2012, and divorced three months later, after the case of domestic violence. Johnson was arrested for beating his young wife, and that scandal caused his dismissal from the Miami Dolphins.

Although Evelyn and Chad have no common kids, the man fathers four kids from previous relationships. Currently, he is an occasional American football player and a coach. 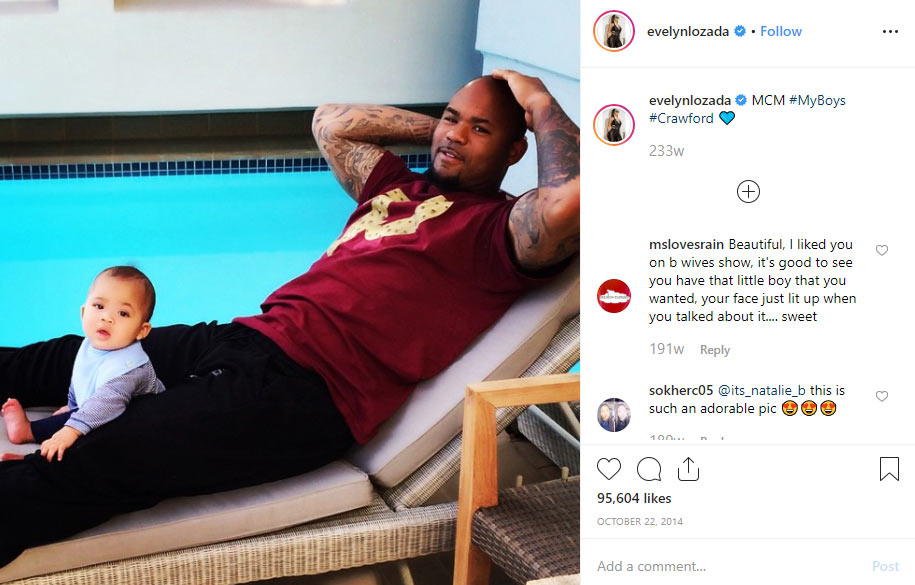 Carl Crawford used to be a professional baseball player. He was raised in Houston, TX. Carl practiced various kinds of sports during his years at Jefferson Davis High School. After that, he decided to focus on baseball exclusively.

Crawford was drafted by the Devil Rays in 1999. During 18 years he played as a left fielder for various famous teams, such as Tampa Bay Rays, Los Angeles Dodgers and others. In 2016-2017 he was dismissed by Dodgers and announced the intention to retire.

He started dating a reality TV star Evelyn Lozada in July 2013. The actress got pregnant from him, and that inspired the man to propose her in December that very year. In 2014 they welcomed a boy Carl Leo. After 4 years of engagement, the athlete and Basketball Wives star parted their ways.

In 2018 Carl welcomed another child – a daughter Celine Crawford – with a famous blogger. In general, he has 4 children – two sons and two daughters. 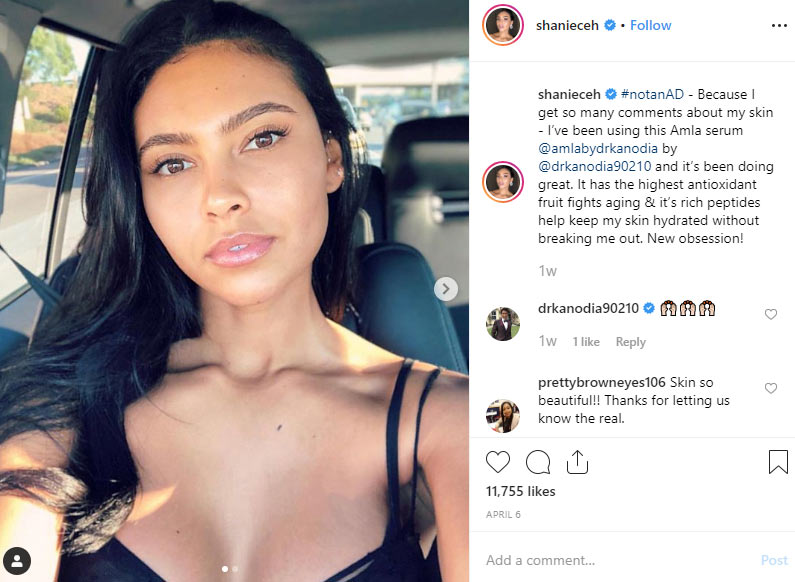 Evelyn Lozada dated an unknown man in a high school and got pregnant from him. She had to quit her studying after the birth of her daughter Shaniece.

The girl was born in The Bronx. She is 25 as of now. She earns her living as a blogger, fitness guru and model. Shaniece runs a beauty salon, too. She joins her work with motherhood – she brings up a son.

Hairston rose to fame as a reality TV actress. She co-starred her mother in the series “Livin’ Lozada”, which was on air during 2 seasons. 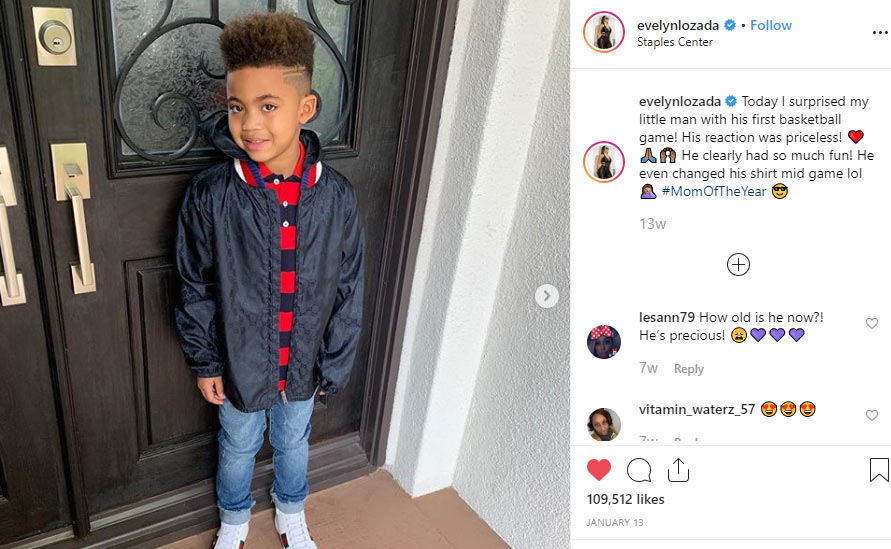 Carl Leo is the only common son of the reality TV star and author Evelyn Lozada and LA Dodgers player (former) Carl Crawford. The boy got his first and second name after his father (the baseball star’s Zodiac sign is Leo).

He was born on early Saturday morning and weighed astonishing 8 pounds. His mother and father separated when he was just 3, but Leo stays connected with both of his parents. The boy has already started to play baseball just like his father.

Who are Evelyn Lozada parents?

Nengo is the name of Evelyn’s father, with whom she has contradictory relationships. It’s hard to tell, that Nengo has never been the part of his daughter’s life because he tried to stay in touch with her after his divorce from his daughter’s mother. But his presence in Lozada’s life wasn’t regular, and the actress thinks, her wrong decisions as for some men in her life were made because of lack of her dad’s care.

Evelyn Lozada‘s mother Sylvia is her best friend. The woman raised her two daughters as a single parent. Till now she resides in The Bronx. She is still very close to Evelyn. During many years Sylvia Ferrer was looking for her father, who disappeared from her life when she was a baby. In November 2017 she finally reunited with her dad. Now the maternal grandfather is an inseparable part of Evelyn’s life.

Sylvia is Evelyn’s sister. Two women are very close. The Basketball Wives star supported Sylvia when she lost her husband of 10 years and father of her two kids, Anthony Ochoa. The man died from cancer soon after Evelyn’s wedding to Chad Johnson. He was just 43 at the moment of his death.

Now Evelyn cares about her sister and nieces.

Evelyn Lozada’s face became famous after her appearance in the reality series “Basketball Wives”, which was on air in 2010-2012 and then was returned in 2017. The show was broadcasted by VH1 network. Lozada was one of the main participants on the show. “Basketball Wives” demonstrated the lives of 5 women, who either were married or were engaged to NBA stars.

Evelyn is a person of a difficult fate. She spent her childhood years in New York borough. Her parents separated when she was still a kid, and she was brought up by a single mother. Evelyn has a sister.

Lozada didn’t finish high school, because she got pregnant from a man, whose name is not publicized. She gave birth to her first kid – a daughter – in the early 1990s. Lozada and her daughter moved to Miami in 2007. After that Evelyn found a job a secretary at an entertainment lawyer’s office. She co-owned a shoe shop, too.

During 10 years she was in relationships with an NBA player Antoine Walker, although the couple has never been married officially. That gave her a right to become a member of the show “Basketball Wives”, which actually made her a star.

After separation from Mr. Walker, she was shortly married to an American football player Chad Johnson. In 2013 she gave birth to a son Carl Leo, whose father is a baseball player Carl Crawford.