Is George Clooney a gay/bisexual?

What is George Clooney marital status?

Who is George Clooney wife?

No need to introduce this great movie star, whom Carrie Bradshaw (Sarah Jessica Parker) named as her secret sexual fantasy. The man, who had never thought about becoming an actor and dreamed about a career in the sports industry, created a string of versatile male characters in numerous screen projects. His fame started from the role of Dr. Doug Ross in the series “ER”. After that, he starred in more than 70 movies and TV series, most of which hit the box office and boasted with high ratings. For many people worldwide he is an idol, but what about his family members?

There’s hardly any woman, who can not get smitten when George Clooney looks at her. During many years George Clooney dated the most gorgeous ladies of the epoch, but he didn’t dare to propose any of them. He was involved in relationships with the actress Lucy Liu, the model Sarah Larson, and the Italian TV star Elisabetta Canalis. But he lost his head only from tall and slim Amal Alamuddin. Unexpectedly, the stellar Hollywood actor George Clooney fell in love not with an actress or model, but with social rights activist and lawyer Amal Alamuddin.

She comes from a noble well-educated family. Her father, Ramzi Alamuddin was the professor of the American University of Beirut, and her mother Bariaa Miknass, earned her living as a newspaper editor. Amal has one sister and two older half-siblings.

She got a brilliant education, too. The future Mrs. Clooney graduated from St. Hugh’s College, Oxford with a bachelor’s degree in Jurisprudence. Later she continued her education at New York University School of Law.

After that, she was busy making a career as a lawyer. The woman reached a lot in the area of activity she had chosen. She protected the rights of many famous people, including Yulia Timoshenko, the ex-prime minister of Ukraine, who suffered from political persecution. She worked for Doughty Street Chambers Barrister’s organization and defeated human rights at the International Court of Justice.

As you see, Amal is a highly intelligent woman. Besides, she is unbelievably beautiful. She is named as the most beautiful lawyer on the planet by various fashion issues.

She met her future husband at a charity event, and Clooney put lots of effort to convince Amal to go out with him. They got engaged that very year and tied a knot on September 27, 2014. The couple brings up two children. 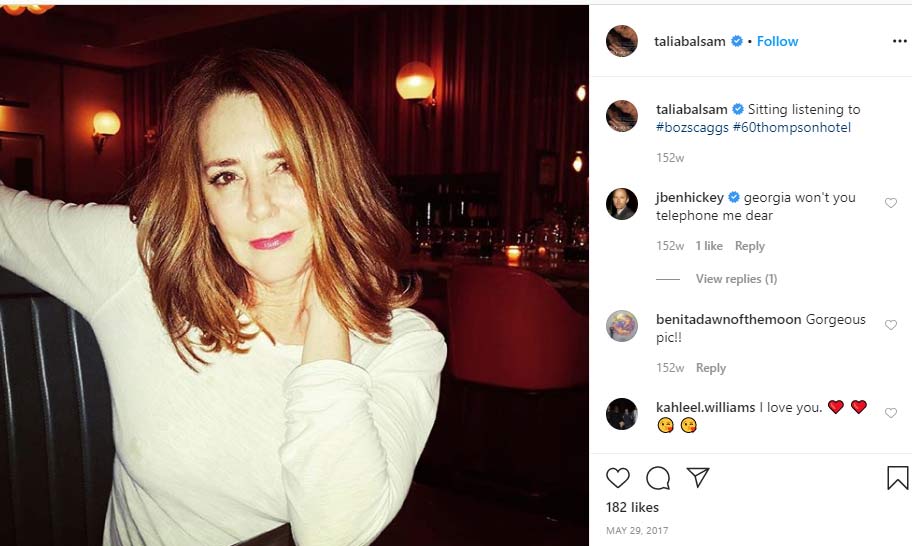 Talia Balsam was the first and during a long period of time the only official wife of the heartthrob George Clooney. When they met, both were aspiring young actors. Talia was so charming, that George quickly lost his head because of her. They got married in 1989 and for several years were considered as one of the most romantic couples of that time. But their marriage didn’t last for long – they separated in 1993 because of financial issues – Clooney’s salary was too low at that time.

After their divorce, Talia appeared in several successful movies and TV projects, among which the thriller “Crawlspace”, the police drama series “Without a Trace” and others.

In 1998 she went down the aisles for the second time – with an actor John Slattery (Victor Lang from “Desperate Housewives”). They share a son Harry. 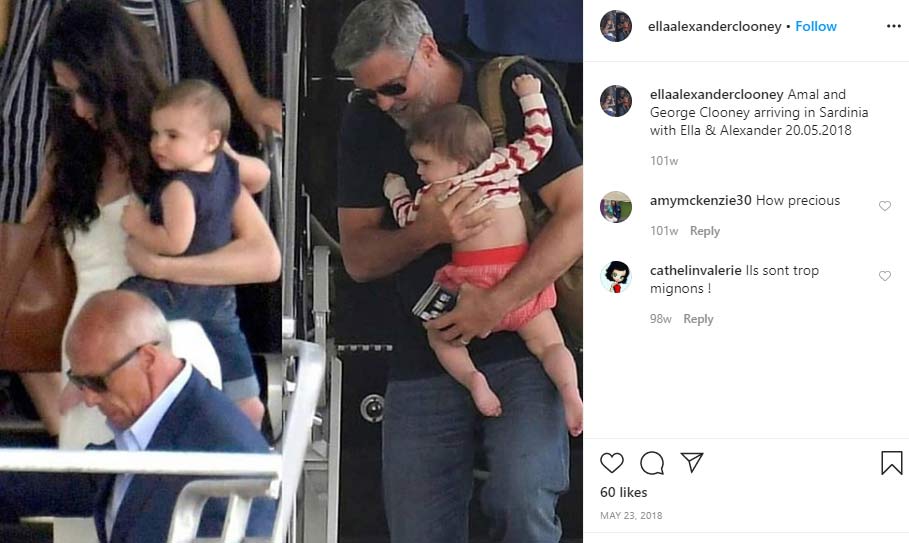 During many years George didn’t want to become a father and he told about it to each his beloved woman. But everything had changed when he met Amal. He wanted to share kids with this beautiful lady, and one day his dream came true. “Mrs. Alamuddin-Clooney got pregnant”, that news appeared for the first time in CBS’s show “The Talk”.

In summer, 2017 Amal gave birth to two healthy beautiful kids – a son Alexander and a daughter Ella. George was 56 when he became a father for the first time. He is very proud of his two chubby children.

Who are George Clooney parents? 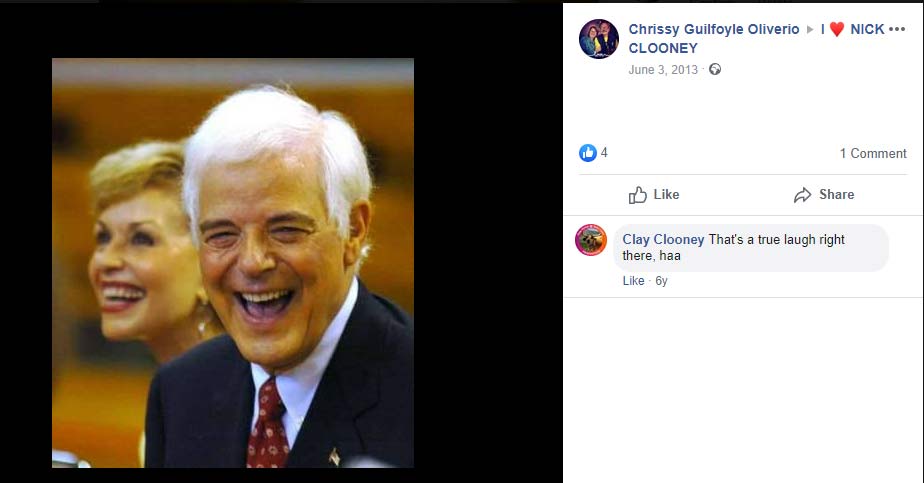 Nick is George’s father, his role model, and his big friend. No wonder, because Mr. Clooney Sr. is a great man, clever, intelligent, and mature.

He was born in 1934 in the family of Andrew and Marie Clooney. He has four siblings. Nick tried to make a career in the movie industry, but then he turned his face to television. During many years he was a famous TV personality and show host. He gained wide recognition in the early 1970s when he appeared on ABC as the host of the game show “The Money Maze”. He also stands behind “The Nick Clooney Show”. He had some political ambitions and participated in the congressional elections in 2004. Being wholeheartedly involved in political and social problems of poor countries, he collaborated with his famous song in the documentary film “A Journey to Darfur”.

Since 1959 Nick has been married to Nina Warren. They have two children. 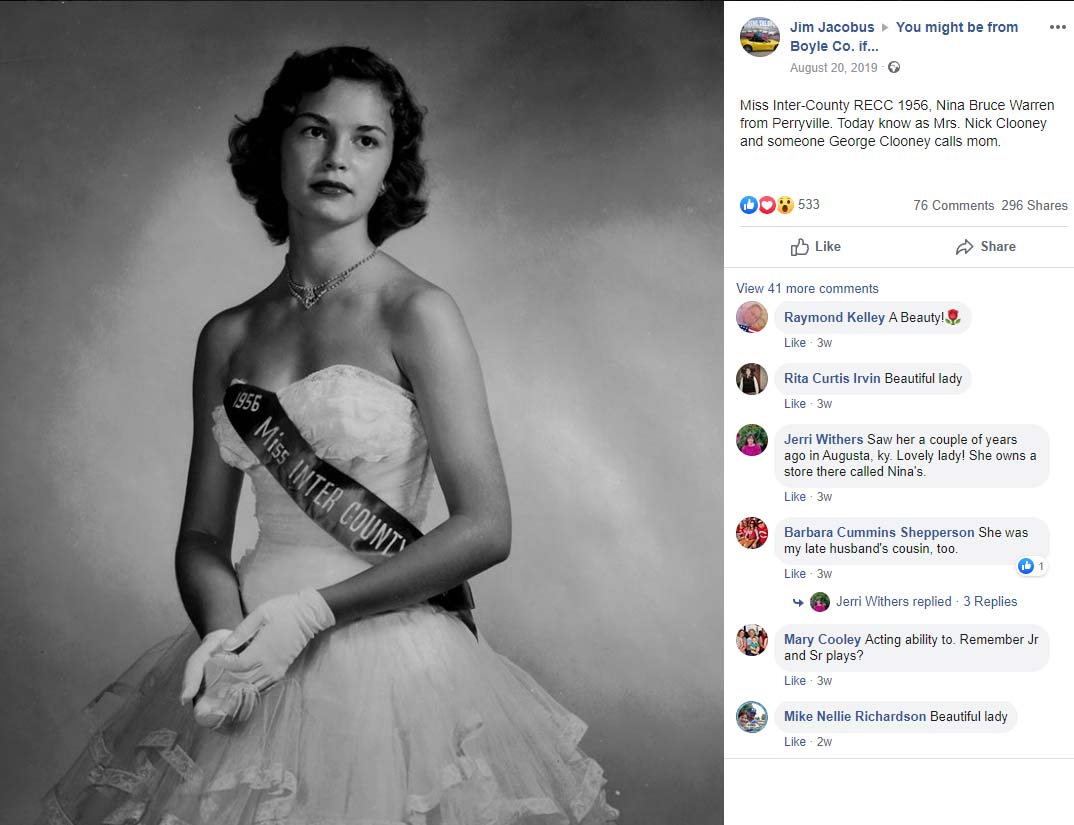 George inherited his aristocratic face features from his mother, a beauty queen. She was born in the family of Marvin and Dica Warren. Nina participated in Ohio State Beauty Contest when she fell in love with one of its judges Nick Clooney. He was crazy from her too, so they started dating and then got married. They remain a happy beautiful couple till now.

George is very close to his mother and shares all his secrets with her. Nina was the first to know the news about his son’s engagement to Amal Alamuddin. She accompanies George at red-carpet events from time to time.

Besides Amal, there is a woman in Clooney’s life, who gets some attention from him. That is his older sister Adelia. They say, Ada (as her friends call her) and George do not see each other very often and she doesn’t even have his phone number. They get in touch through e-mails instead.

She dreamed to become an actress in her young years but didn’t dare even to give it a try. “My skin wasn’t thick enough for it”, she tells. Ada was married to Norman Zeidler for 17 years till his sudden death in 2004. With Norman she parented a daughter Allison and a son Nicholas. George Clooney loves his nephews and never forgets to send them presents for each holiday. She lives not far from her parents’ house in  Kentucky and works as an accountant.