Is Joe Manganiello a gay/bisexual?

What is Joe Manganiello marital status?

Who is Joe Manganiello wife?

Who are Joe Manganiello parents? 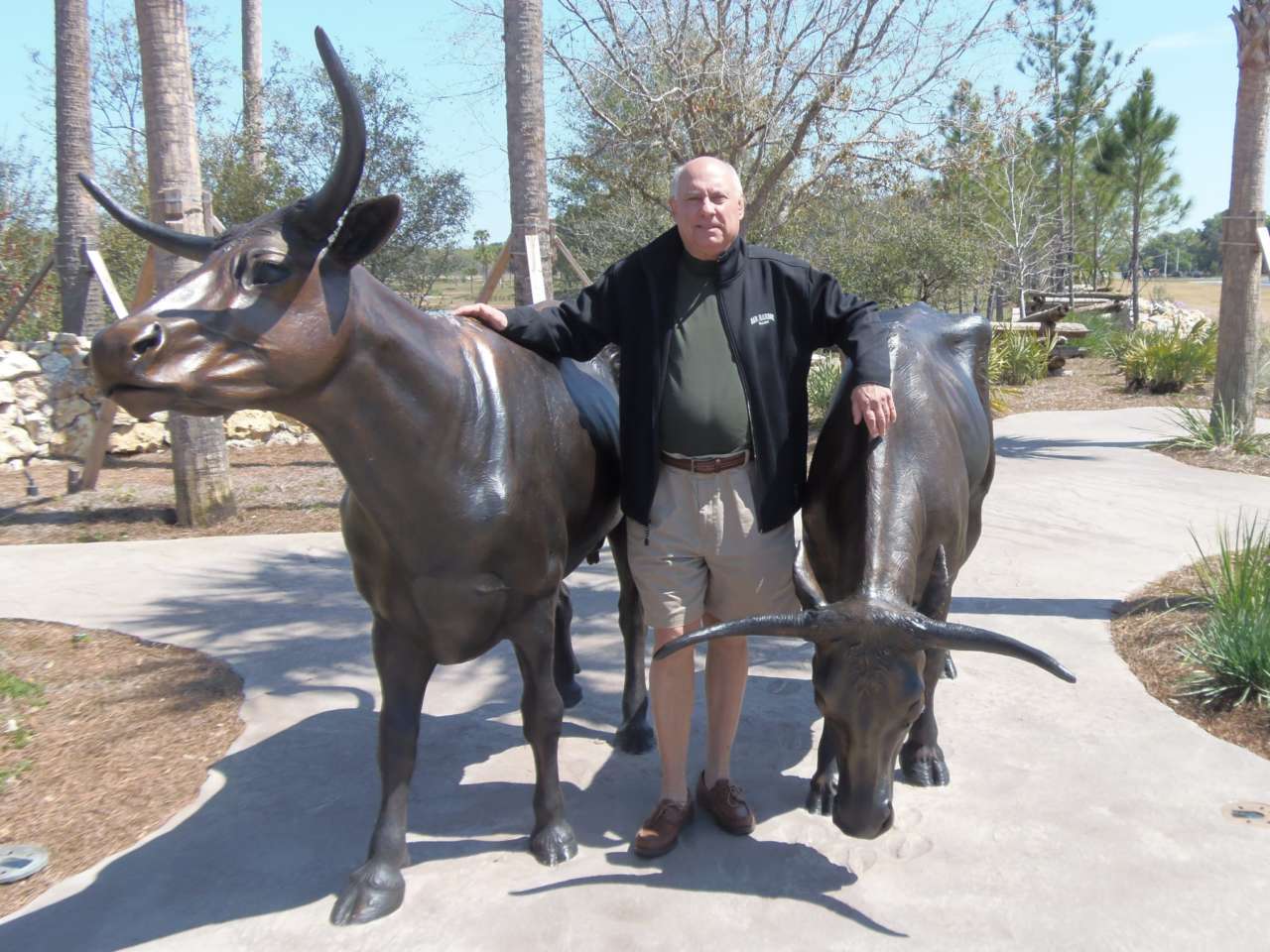 Joe opened up in his book “Evolution: The Cutting Edge Guide to Breaking Down” that like any other son, he wanted to deserve his dad’s approval and respect. Mr. Charles John Manganiello grew up in the family of Marie Bonanno and Emilio Manganiello, both had Italian roots. Charles spent his childhood years in Boston, but in the early 70s, he moved to Pittsburgh, PA and settled there. He married Susan Brachanow and brought up two sons with her. He was an electrical engineer and during many years he had been working as an engineering service manager in “General Electric” company. He is retired as of now.

Charlie spent a lot of time with Joe and was quite a controlling parent. He wanted his son to become an athlete, and True Blood star worked out a lot in his teens, but he was quite tall and lean, and his body stature was somewhat ascetic. To get a chiseled body, he started to train harder.

Joe never turned from physical labor and worked a lot in the yard of his parents’ home, guided by his dad. At weekends Charlie and Joe visited Pittsburgh Steelers games at the stadium. So, the famous actor had a normal and happy childhood.

As for now, Joe rarely speaks about his father. Probably, he doesn’t communicate too often with him, because Charlie separated from the actor’s mother. Now he resides in The Villages, Florida with his second wife Nancy Manganiello. 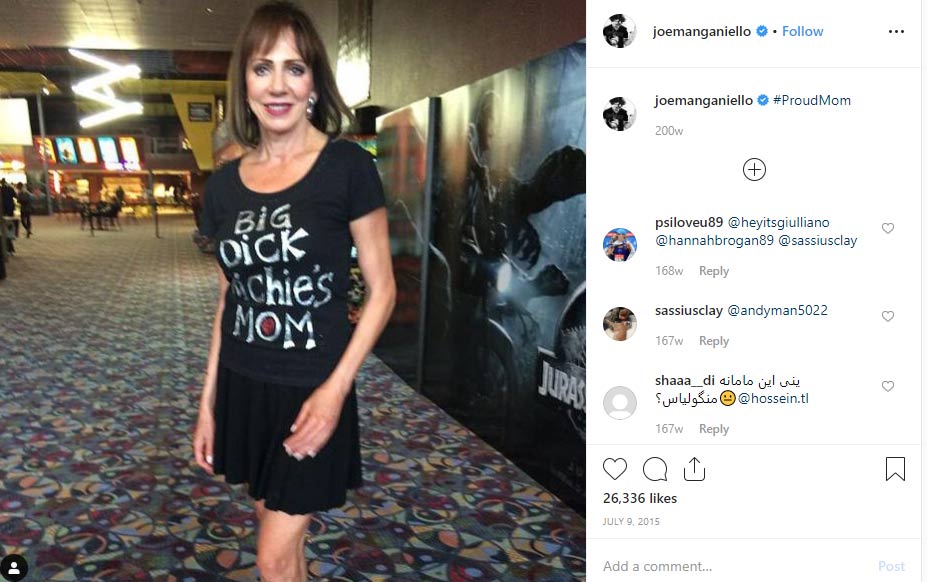 Susan is Joe’s mother, and just one look at her is enough to understand that a renowned Hollywood star has lucky genes. The woman of 71, she doesn’t look at that age at all, being so slim and flexible. Susan likes sports and she is a great dancer. The woman participated in “Dance with Pittsburgh Celebrities” – a local charity event, inspired by the popular TV show “Dancing with the Stars”.

Mrs. Manganiello used to be a model. She spent the major part of her life in Pittsburgh and brought up two sons with Charles Manganiello. As Joe confessed in his interview, his father was rather a disciplinarian and mentor for him, while his mother was his friend. Till now he is very close to Susan and is proud of her.

By the way, Joe’s wife Sofia Vergara is in great terms with Susan. Two women adore each other. 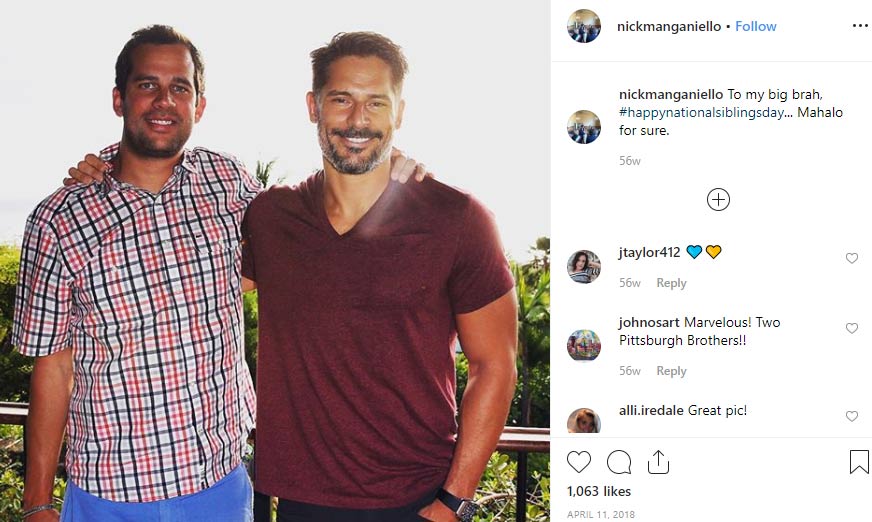 Nicholas Manganiello is Joe’s younger brother. Two siblings have cordial terms. They spend a lot of holidays together and never forget to share the pics from their family events on Instagram. Nick used to live in Pittsburgh, PA, but he moved to Los Angeles not long ago, following the advice of his older brother.

Nick is married to Lana Manganiello. He met her in a bar in 2008 and immediately fell in love with her. They wedded in October 2012 and since then they live a happy family life. Nick and Lana have 7-year-old daughter Gia and another little baby, too.

Joe’s brother earns his living as a film producer. 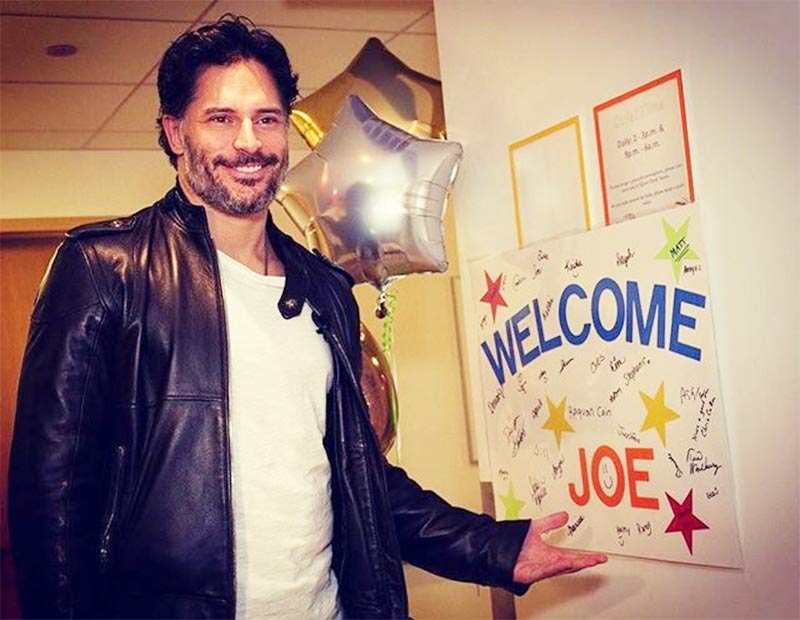 He is named in the press as “the gentleman in wolf’s clothing”. Probably, Joe plays brute heroes on TV, but he is really well-educated and reasonable in his everyday life. He is not just a talented actor, but also a handsome, well-shaped man, who featured in numerous lists of the most beautiful and sexiest people on the planet, made by People Magazine, Paper Magazine and other issues.

He grew up in Mt. Lebanon, the suburb of Pittsburgh, PA and attended a Roman Catholic School. Joe was a brilliant student and a talented athlete and even was appointed as a captain of a school team several times. He played skillfully football, basketball, and other sports games.

During his last year in a high school, Manganiello fell in love with acting. He performed in a school play and even created amateur short films with a cheap camera he owned.

As a student, Joe featured in many productions of Pittsburgh’s theatre. He gained initial popularity as a stage actor, and till now theater occupies the special place in his heart in spite of his status of an internationally popular TV and movie star.

Joe debuted on the big screen in 2002. He portrayed Flash in a superhero film “Spider-Man”.

Nowadays Joe Manganiello’s extensive resume is full of hits – he played the lead role in the series “True Blood” and made occasional appearances in the series “Mom”, “Two and a Half Men”, “How I Met Your Mother” and others. In addition, the actor is a frequent guest on the big screen, too. He acted in the films “Magic Mike XXL”, “Justice League”, “Drunk Parents” and others.