Is Kate del Castillo a lesbian/bisexual?

Who is Kate del Castillo husband? 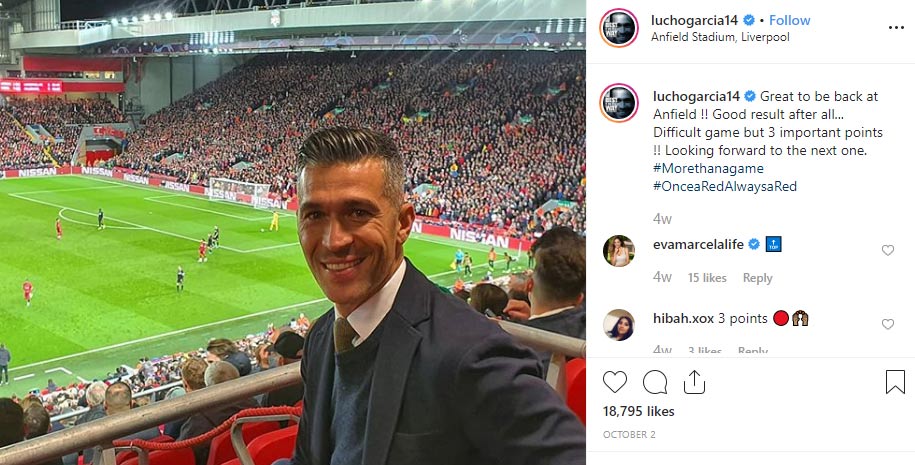 Kate del Catillo met the famous Mexican footballer in 2000. They dated for a year, and then he proposed to marry. They tied a knot on February 3, 2001. After the wedding, Luis changed his attitude towards Kate. His mood could change rapidly and he could get furious at any moment. Sometimes he could even lay his hands on her. Their married life turned into a disaster, and Kate filed for divorce. Their marriage ended on September 1, 2004. Now Kate speaks openly about abusive relationships between a man and a woman to support other females in a similar situation.

Luis García Postigo was born in the capital of Mexico. He gained a reputation as one of the most talented football strikers in his country. During the years of his career, he played for various football clubs, including “Atletico Madrid” and “Puebla”. In 1994 he was selected as the player for the Mexican National Team at World Cup. He retired from professional football in the early 2000s and now he works on TV as a sports commentator.

Kate was not sure, that she needed to get married, especially after her complicated divorce with Luis. But she met the unbelievably handsome man Aaron Diaz and fell in love with him. He asked Kate to marry him – and she agreed, mostly to please her parents, who wanted their little girl finally to settle down with some great man. They wedded in August 2009 and had a very beautiful ceremony in Las Vegas. But that marriage didn’t become happy, either. On July 26, 2011, the couple separated. Kate defined the reason for her divorce as Aaron’s jealousy.

Aarón Díaz Spencer is a famous Mexican-American actor and model. He is mostly known as the lead actor of the Venezuelan series “The Talisman”. He played occasional parts in some ABC television series, too. Since 2012 he is married to an actress Lola Ponce. They have two daughters.

Who are Kate del Castillo parents? 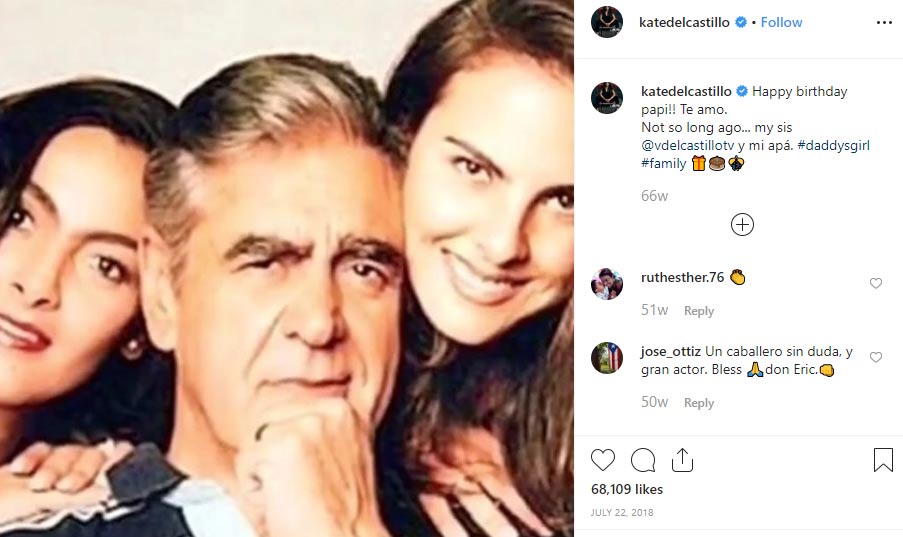 Kate names herself as “daddy’s girl”. She is very close with her father, spends a lot of time with him and then uploads the bright pictures of their father-daughter quality time on Instagram.

Eduardo Eric del Castillo-Negrete Galván is a celebrity, too. He is a famous Mexican actor, screenwriter, and film director. He was born in Celaya, Mexico. His mother was a teacher and his father served as a firefighter. He died in the line of duty. Eric has two younger brothers.

He began his career way in the early 1950s. During the first decade of his acting, he performed on the theater stage and took part in more than 40 plays. After that, he moved his way on television and acted in numerous films and soap operas.

Eric is recognized as Baldomero from “Alondra”, Marcos from “A Blow of the Heart” and Evaristo from “The Three Sides of Ana”.

Since 1969 the actor has been married to Kate’s mother (and namesake) Kate Trillo Graham. Previously he was married to Roxana Bellini Santamaria. 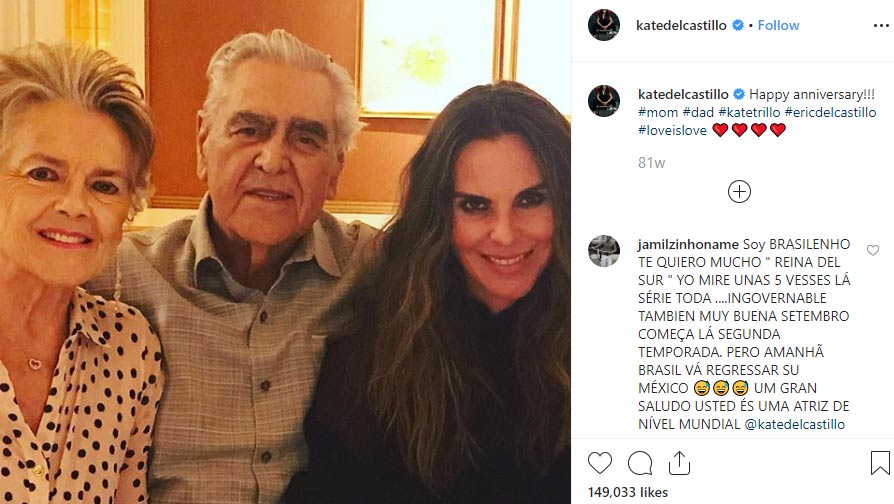 Kate Trillo Graham knows the secret of family happiness. She met her current husband in the late 1960s, and then he was just an aspiring young actor, whose best roles were yet to come. Eric loved Kate at first sight and proposed to her that very evening he had met her. A week later they tied a knot at a very private ceremony, surrounded by the closest friends and parents. They lived together for many years, and Kate Trillo confessed in her recent interview, that the secret of their marriage is patience. “Young people get divorced so quickly nowadays”, she said.

Kate is a mother of two talented daughters. One of them is our heroine, Kate del Castillo. The other one is Veronica. 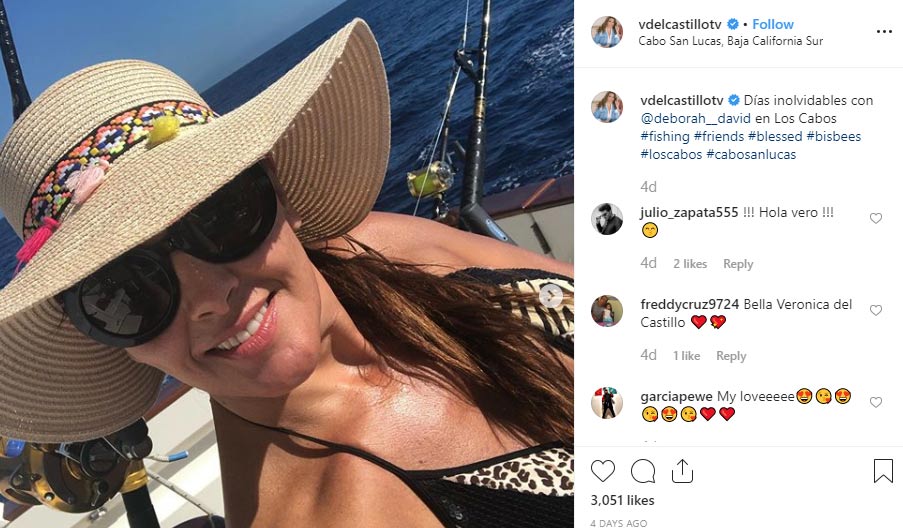 Veronica is Kate’s older sister. She is her only full sibling. Two women have closely-knitted warm relationships. Sometimes Vero attends the award ceremonies and premieres, where her younger sister participates.

Vero is an occasional actress, too. She has already appeared in the thriller “The Devil’s Nieces”, directed by her father.

Now she works as a news anchor, journalist, and writer. She has a son, named Darwin.

Ponciano is Eric’s son from a previous marriage. He is an actor, known by such films as “A Hot Viper” and “Deadly Silence”.

Kate has two more half-siblings from her father’s side.

Kate del Castillo is a famous actress, known mostly by her roles in soap operas and TV series.

She was born in Mexico City, Mexico in the family of an actor and a housewife. She has an older full sister and three older half-siblings from the paternal side.

She debuted at a tender age of 6. Then the girl got a role in the Mexican film “The Last Escape”. Her play in the movie was very sincere and natural. Her talent to change and to create different screen characters became obvious.

To the age of 20, she has already become an aspiring young actress in her home country. At that time her most prominent role was in the series “Muchachitas” (“Little Girls”). The soap opera was shown in several countries in Latin America and became a hit in each of them. In 1991 she got her first professional award – for the TV show “Crystal Empire”.

In the middle 2000s, she gained recognition in USA – and then worldwide. She featured on Ricky Martin’s music video “Fuego de Noche, Nieve de Día”.

Her most famous as of now role is Teresa Mendoza in the series “La Reina del Sur” (“The Queen of South”). The American-Mexican story about a strong woman, who turned into a skillful and fortunate drug dealer, gathered millions of people in front of their TV sets all over the world. That brought Kate international fame.

Among her recent projects, there’s the voice work in the American 3D animated film “The Book of Life’.