Is Katy Perry a lesbian/bisexual?

What is Katy Perry marital status?

Who is Katy Perry husband?

Katy Perry became popular after release of the song “I Kissed A Girl”. But in her real life the singer kisses just boys, and all her boys are handsome and famous. The actress had a short romance with a musician John Mayer, dated DJ Diplo and had a fling with Jared Leto. But most of her love affairs are short and not serious. The exclusion was her relationship to Russell Brand. He was the only man, whom eccentric Katy got married.

Russell Edward Brand is one of the most contradictory British comedians. Incredibly talented, he was known as a person, who can do any unexpected stunts. Thus, he made obscene comments during a radio show and later, when he was a host at MTV, dressed as Osama Bin Laden. Of course, such an exotic man immediately captured heart of young Katy, when she met him.

Before crossing his ways with a popular pop princess, Russell was a cute English boy. He grew up in Thurrock, Essex in the family of a photographer Ronald Brand and a secretary Barbara Nichols. His parents separated, when Brand was still a baby. His mother soon married another man.

Russell’s childhood can’t be called “happy”. He suffered, when his mother was diagnosed with cancer (then the boy was just 8). Then he couldn’t find a common language with his mother’s new partner. Barbara liked her only son, and she was ready for everything to make him happy. But her cancer problems and new lover prevented her from spending high-quality time with Russell. Thus, the boy stayed with various relatives. From time to time he visited his father, who behaved with his teen son in a very strange way. For example, once he took young Brand to the Far East to enlarge his sexual experience. Ronald hired prostitutes not just for himself, but also for his son.

During his years at school Russell often made people laugh. His teacher and classmates considered him as an easy-going funny boy, while deep in his soul Brand was crying, not laughing. In his teens he tried his hand as an actor for the first time – acted in a school performance “Bugsy Malone”. Comedy made the boy happier, but not for long. Unlike acting, heroine brought him more comfort. Gradually, he became drug addicted.

In early 1990s Katy Perry ex-husband understood, that he wanted to be an actor. He studied this art professionally at Italia Conti Academy. But he was caught, being on drugs, and had to leave.

In late 1990s and early 2000s Russell became quite popular as a stand-up comedian. He participated in NATYS, a famous comedy contest and occupied the fourth position. The vivid interesting stand up comic was noticed by rich managers and producers. 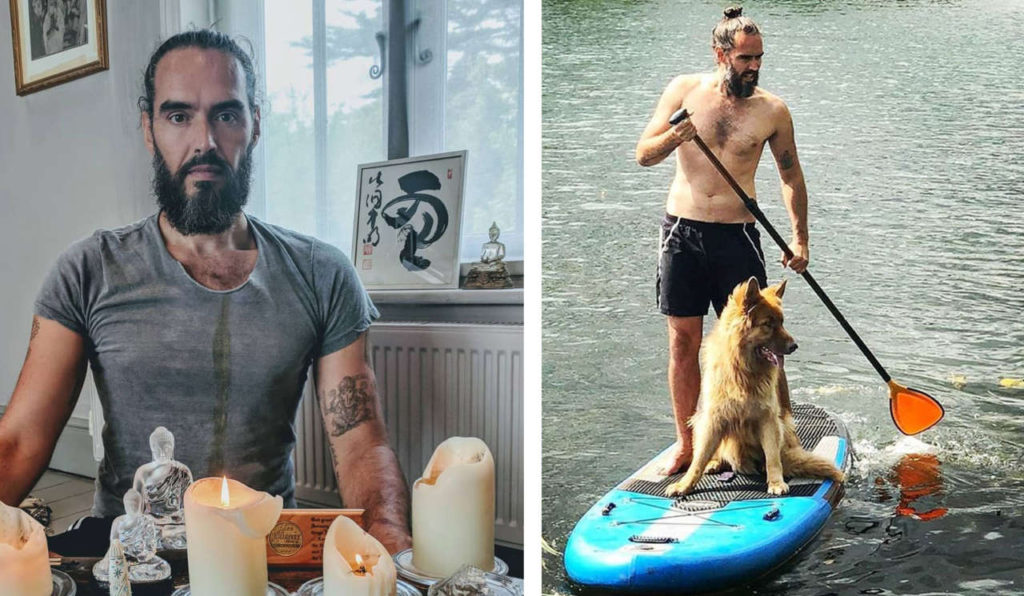 Firstly he performed with his friends Mark Felgate and Shappi Khorsandi as a part of the trio. Later he decided to perform solo. In 2006 the standup comedian started his first tour “Shame”.

After that he arranged many other international tours, and each time the tickets for them were sold like hot pies. He even performed in front of the royal family.

Alongside career of a standup comedian, Russell developed his skills of an actor. He became popular not just in Great Britain, but also in USA and worldwide as Aldous Snow from “Forgetting Sarah Marshall”. Among his other popular screen works there are films “The Tempest” and “Army of One”. In addition he voiced Dr. Nefario in “Despicable Me”.

Russell Brand used to be drug addicted, but he managed to cope with this problem and he stays sober since 2002.

He was madly in love with Katy Perry and married her in 2010. But they both were very busy and as Brand told later, he was a hard person to deal with. Their marriage ended in 2012.

Nowadays Russell Brand is married to a blogger Laura Gallacher. They have 1-year-old daughter Mabel.

During many years after her split to Russell, Katy Perry was silent. But later she shared her thoughts on their relationships. She met her loved one at the set of “Get Him to the Greek”, where Russell played one of the lead roles, and Kate was planned to make a cameo appearance, which later was cancelled. They started dating, and according to Katy’s words, she really fell in love with her man. They wedded in India in October 23, 2010. The couple paid for their friends’ trip to that country to share that moment with them. Brand and Perry’s guests enjoyed the beautiful ceremony and tasted a vegan wedding cake. But a year later Russell sent his wife a message, where he asked her for divorce. Thus, their love story ended.

But Katy moved forward and met another man.

Orlando Bloom (boyfriend; on and off relationships since 2016) 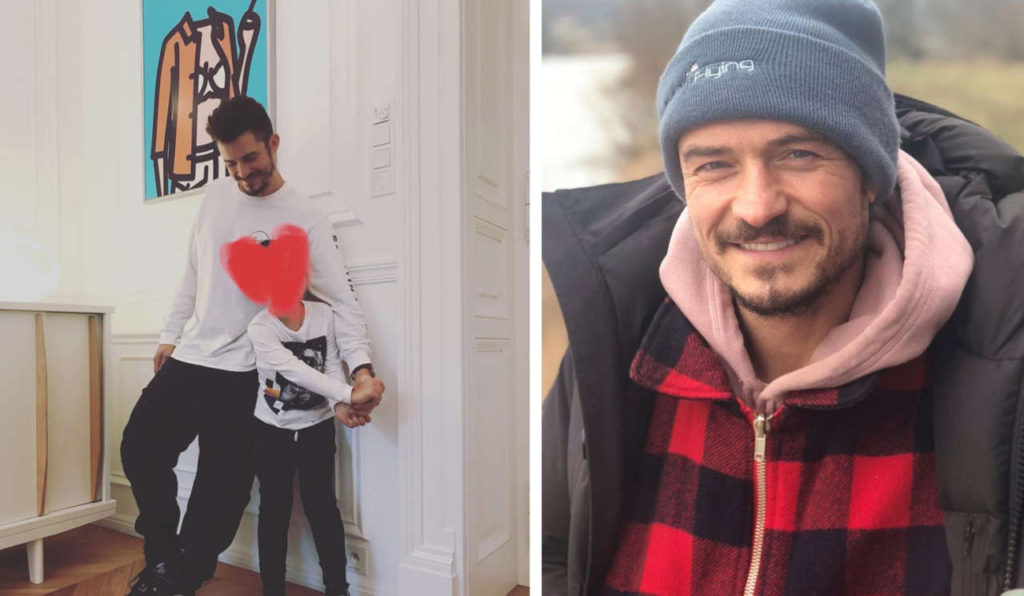 Frankly speaking, it’s hard to define Katy Perry relationship status today. She positions herself as a single lady. But according to some issues a singer started dating Orlando Bloom again. These two have a long and interesting love story.

Orlando Jonathan Blanchard Bloom started his life in an unusual way. He was born in Canterbury, England and his parents named the boy after a popular ancient composer Orlando Gibbons. During many years the boy was brought up by a lawyer Harry Bloom, but when Orlando reached his teens, his mother Sonia told him, that his biological father was Colin Stone, the school principal.

Katy Perry loved one spent his young years with his parents and older sister Sam. He understood that acting was his cup of tea, still being a pupil of Canterbury’s St Edmunds School. After graduation he studied acting at Guildhall School of Music and Drama.

Orlando Bloom is mostly known as Legolas from “Lord of the Rings”. But he acted in many other interesting films too. The fans love his works in “The Three Musketeers”, “Romeo and Juliet” and “Romans”. 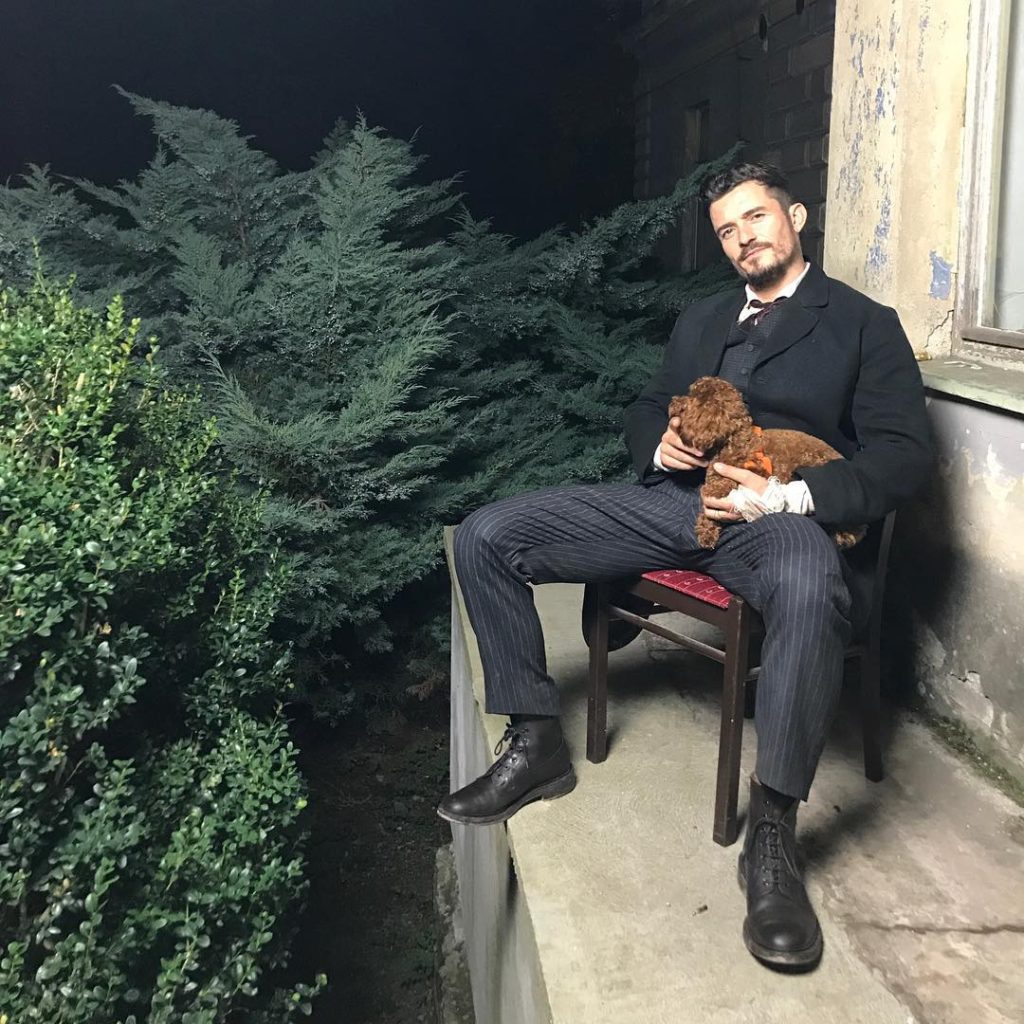 As for personal life, Orlando was previously married to a model Miranda Kerr. They have a son Flynn together. The couple divorced in 2013. After that the heart eater Orlando was romantically connected with many great ladies. In 2013 he was rumored to date Steven Tyler daughter Live. A year later he flirted with young, but hot Selena Gomez and then was photographed with elegant beauty Nina Dobrev. He enjoyed the company of the most beautiful ladies in the world and couldn’t choose anyone. But the things changed, when he met Katy Perry.

Mr. Bloom met talented Katy Perry in 2016 at Golden Globe awards. They danced and flirted at the after party, arranged by Netflix. Then rumors about their love affair appeared for the first time.

Later two stars were caught together at Adele concert and other public events. In May, 2016 the couple finally made their romance official. The fans of both were so happy for them! But their love turned to be a very vague thing. In March, 2017 two sweethearts decided to “spend some time apart”.

But in April, 2018 Katy and Orlando appeared at a number of public events together. Later they confirmed, they are dating again and even think about living together.

Who are Katy Perry parents? 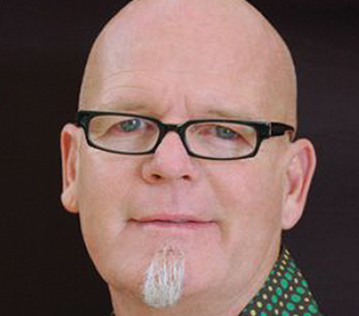 He was born in the family of Robert and Ann Hudson. Since the earliest years he understood his mission – to expose spiritual lethargy. He began to preach at a very young age. Keith met his soul mate – Kate Hudson’s mother – at Pat and Buddy Harrison conference in late 1970s. They wedded on December 2, 1979 and since then join family life with their religious mission.

Keith and his wife Mary spent many years, crossing the territory of United States on a car and preaching. Finally, they settled in Santa Barbara and opened the Christian Oasis Center. The couple gave a birth to three kids, including a celebrity Katy Perry.

Mr. Hudson doesn’t look like a typical pastor. He shaves his head, wears cowboy boots and leather jackets. According to Keith words, he wants to show, that typical look of a pastor has already become obsolete. He authored a number of books on spiritual topics.

They say Katy is close with her father. Nevertheless, it’s hard for him to accept his famous daughter’s looks and songs sometimes. Together with other members of Hudson family, Keith tried his forces as an occasional actor and participated in a number of documentary films about his daughter, such as “Katy Perry: Part of Me”. 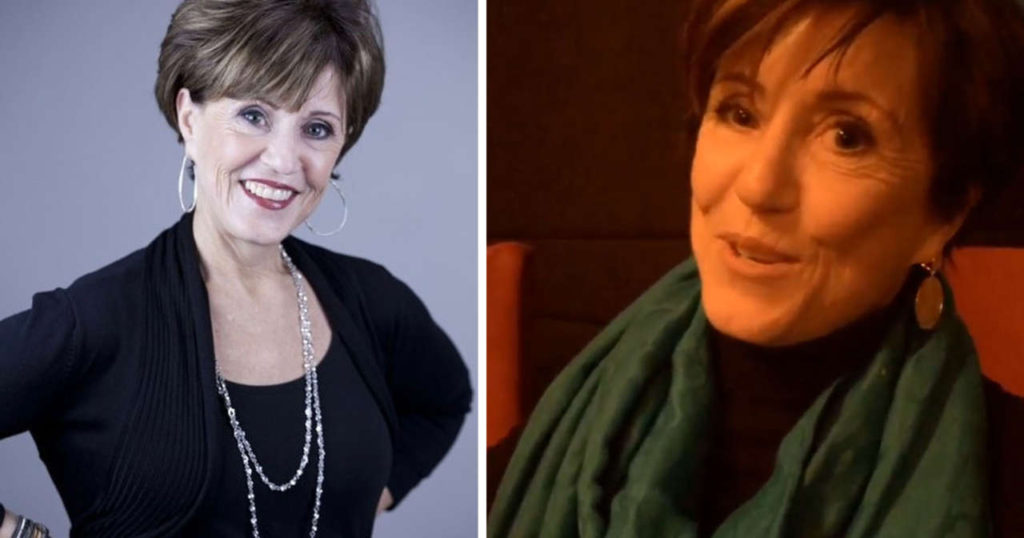 Mary is Keith’s wife of many years and a person, who shares all his interests. She is a pastor, too. Mary always stays by her husband’s hand during their spiritual trips and preaches.

She was born in the family of Frank and Mary Elizabeth Perry. Her parents divorced, and she has three half-brothers from both, her mother’s and father’s sides. One of her siblings, Frank Joseph Perry, Jr, was a celebrated film-director. Probably, Katy inherited his genes and his love to show business.

When Katy decided to become a singer, she took her mother’s maiden name. The young entertainer didn’t want to be mixed with a famous actress Kate Hudson, Kurt Russell stepdaughter.

Before turning her face to preaching, Mary was a news director at a radio station. But she forgot about that job after meeting her husband. Mary authored a book “Smart Bombs”.

Of course, she spent a lot of time with her kids. Except for Kate, Mary has a daughter Angela and a son David. 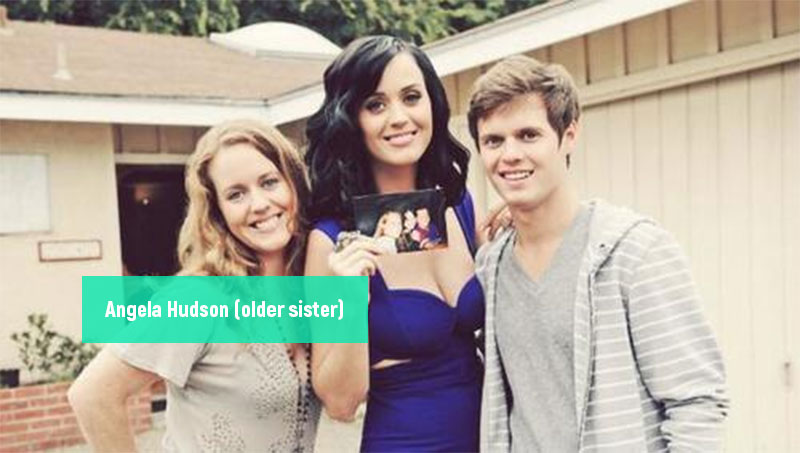 Angela is Kate’s older sister, who is a friend and an inspiration for her singing sister. She is married to Svend Lerche since 2012. On February 26, 2014 Angela gave a birth to her and Svend’s daughter. She didn’t go to a hospital and welcomed a child at home. Katy Perry was by her sister’s side at that moment and filmed each detail of baby delivery process. In 2016 Angela and her husband welcomed their second kid. 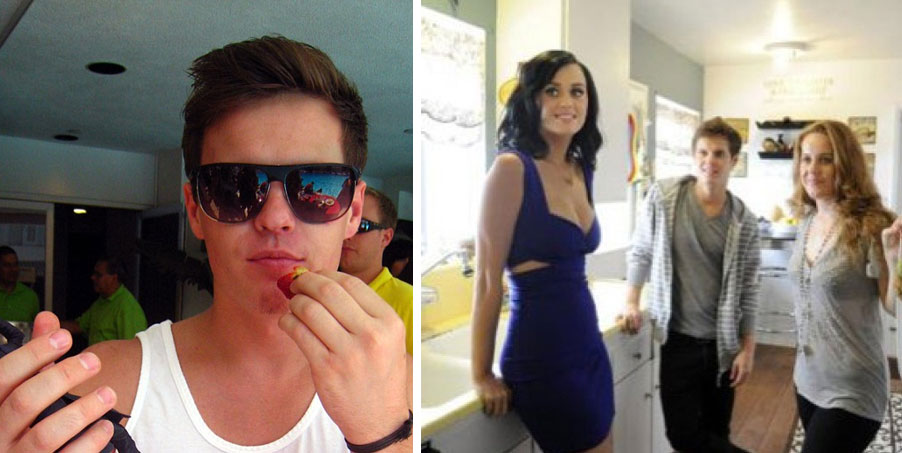 David is Katy’s younger brother, her big fan and a person, who wants to follow her pace. In 2012 Hudson Jr recorded an extended play “Dirty Face”, which gained international success.

A year later he presented the first studio album. In addition to singing, David pursued acting too. He played in a short comedy “Summer Campbell” and some other films.  Currently the young man resides in Tulsa, Oklahoma.