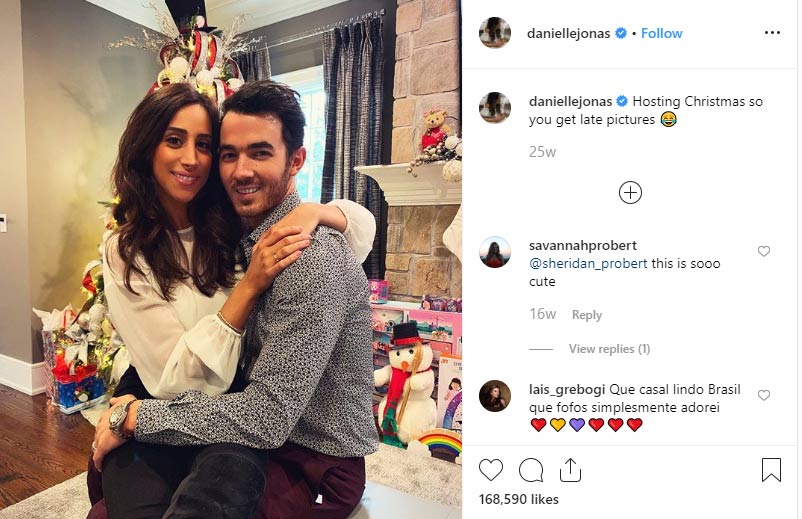 Danielle Vera Deleasa, who is currently known under the name “Danielle Jonas”, is a wife, a mother and an occasional actress. She gained extensive popularity after appearance in the reality series “Married to Jonas”. For her talented play, she got Teen Choice Award nomination in 2013.

Dani, as she is named in a circle of relatives and close friends, was born in the family of Thomas and Angela Deleasa. She has two sisters and a brother. She grew up in Morris County, NJ. Since the earliest years fashion and beauty were her main interests. In her teens, she entered Parsippany beauty school. The woman worked as a hairdresser from 2005 till 2007.

In summer, 2007 she went for a vacation to the Bahamas. There she met Kevin Jonas, and both started dating. A year later the singer popped the question, and she said “Yes!” They tied a knot on December 19, 2009, and went to Mexico for a honeymoon.

They have been married for almost 10 years as of now. Dani and Kevin are considered as one of the most romantic couples in the music industry. They provided a good example for their two daughters. 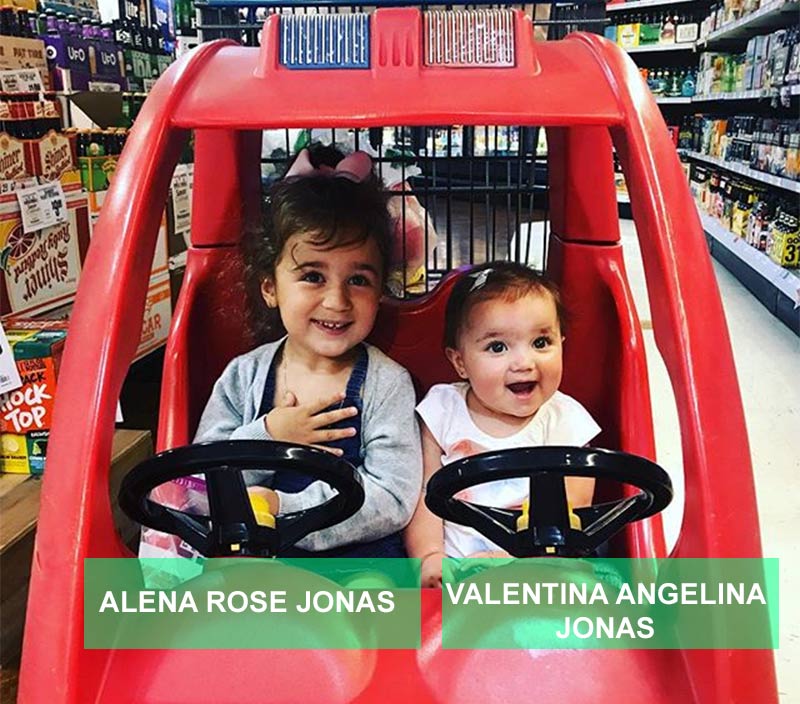 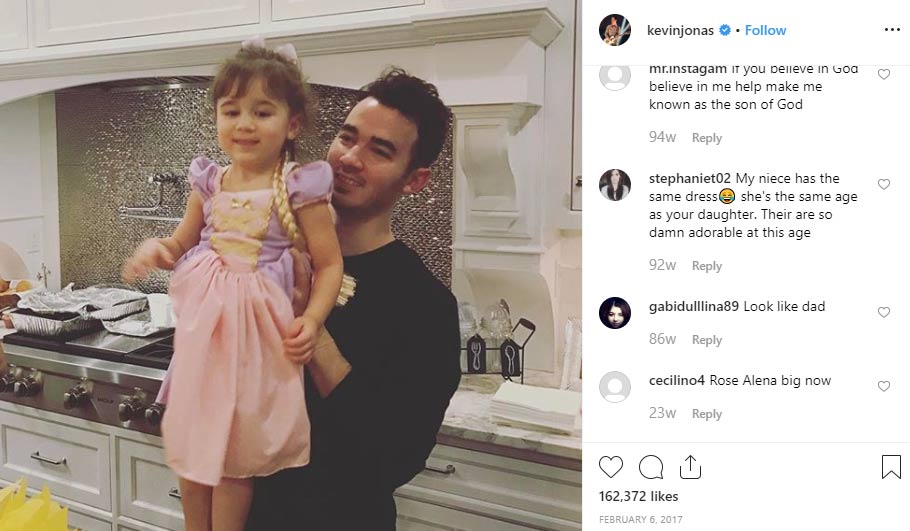 The famous musician Kevin Jonas became a father for the first time on a Sunday morning in February 2014. The happy daddy immediately shared through Twitter the baby news among his fans.

Unlike other celebrities, Kevin and Dani didn’t hide the details of their pregnancy from the wide audience. They shared everything – Dani’s visits to the doctor, the baby gender and her name. “It’s a happy time in our life, we want to share it with everyone”, the singer told.

As of now, Alena is a five-year-old young lady. She visits pre-school and is really fond of music. Kevin uploaded on Instagram a funny video, where Alena tells, that she is a fan of “Metallica”, although she loves “Jonas Brothers”, too.

It was she, who shared the news about the Jonas Brothers Reunion. The girl told about it to her classmates, and even shared the fact, that she was going on tour with her father Kevin. Obviously, that was too early to talk about it!

Alena has a younger sister. 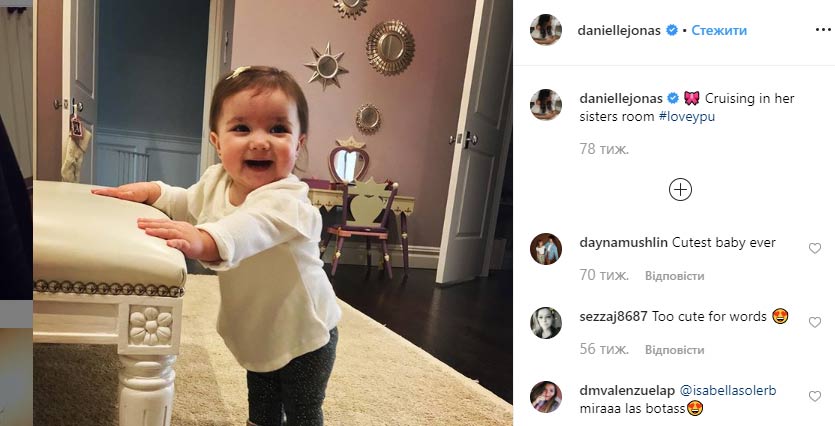 In 2016 Dani and Kevin shared an interesting quote on Instagram. They told that they are preparing the children’s room again. Yes, that was great news about Dani’s second pregnancy.

The second daughter of two celebrities entered this world in October 2016. The day before it, her father complained to his fans through social media about a long wait and anxiety he felt, while his wife Dani was in labor. 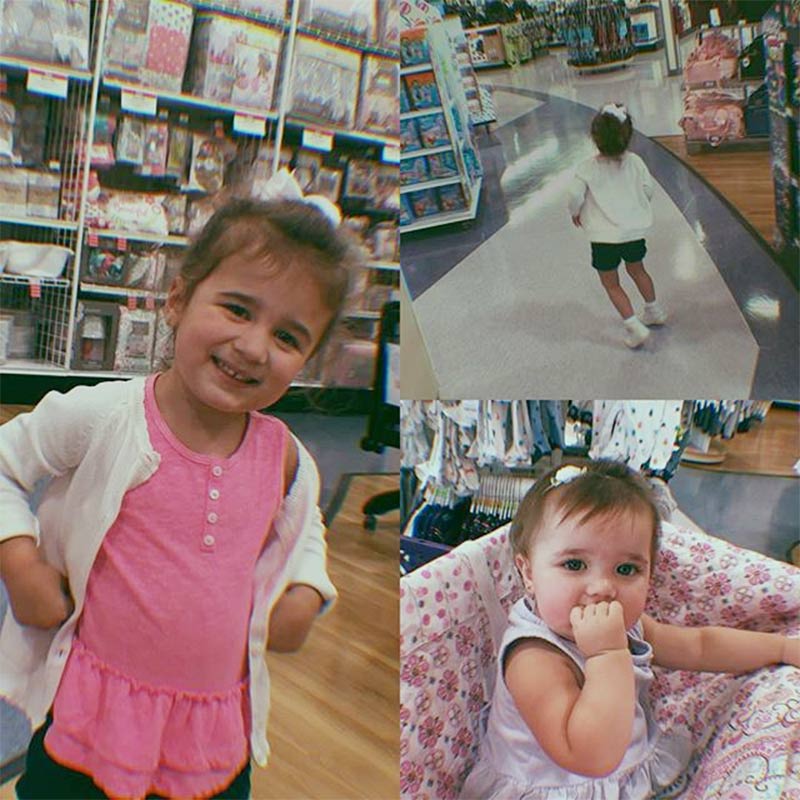 On October 28, the new-made Uncle Nick Jonas shared through Instagram, that he had another niece. The girl was named Valentina.

Daddy Kevin likes his younger daughter very much and pampers her. Dani’s sister Kathleen even confessed in social media, that Valentina thinks that her dad is her boyfriend, so attentive he is to her. 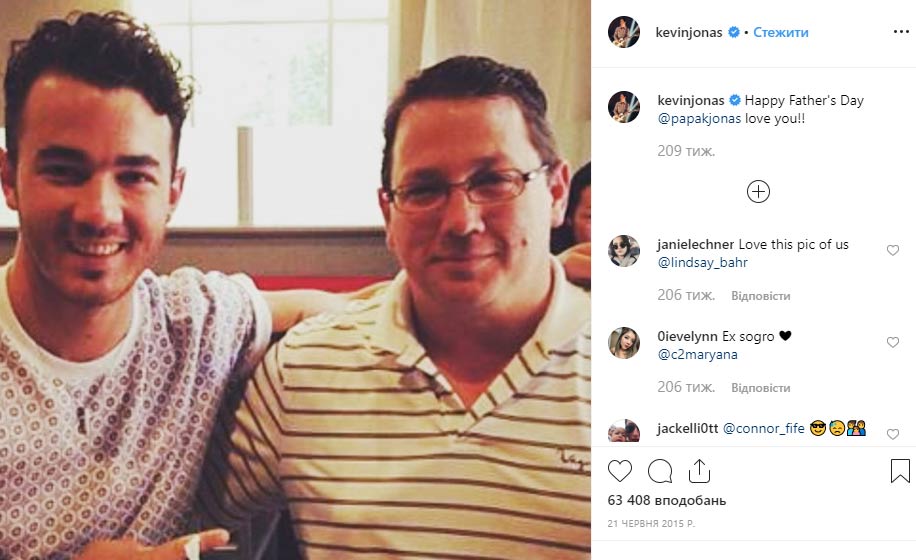 Modern music lovers know Papa Jonas just as the parent of three talented brothers – Kevin, Joe, and Nick. But for the older generation of listeners, he is known as the musician and preacher.

Paul Kevin Sr. was born on February 1965 in Teaneck, New Jersey. Since the earliest years, he was interested in music.

Paul Kevin Jonas Sr. was born on February 13, 1965, in Teaneck, New Jersey. Composing music has been his obsession since the earliest years, and he joined his passion with incredible piety. In the late 1980s, he started serving as a teacher at a Bible college. He composed and recorded religious music during his time at a college. To that moment he had already been married to Denise, a singer and a mother of his three sons.

It was his father, who taught Kevin to love and understand music. From time to time Paul Kevin took the Christian singing group on tour, and his sons accompanied him, too. In 1996 Paul’s hard work was appreciated, and he was appointed as an ordained minister by Wyckoff Assembly of God Church.

Later Papa Jones helped his sons to create and promote their family band “Jonas Brothers”. He worked as the band co-manager. He was the founder of the corporation “Jonas Enterprises”.

Now Paul Kevin is retired. He spends a lot of time with his sons, daughters-in-law and grandchildren. He is a cancer survivor. 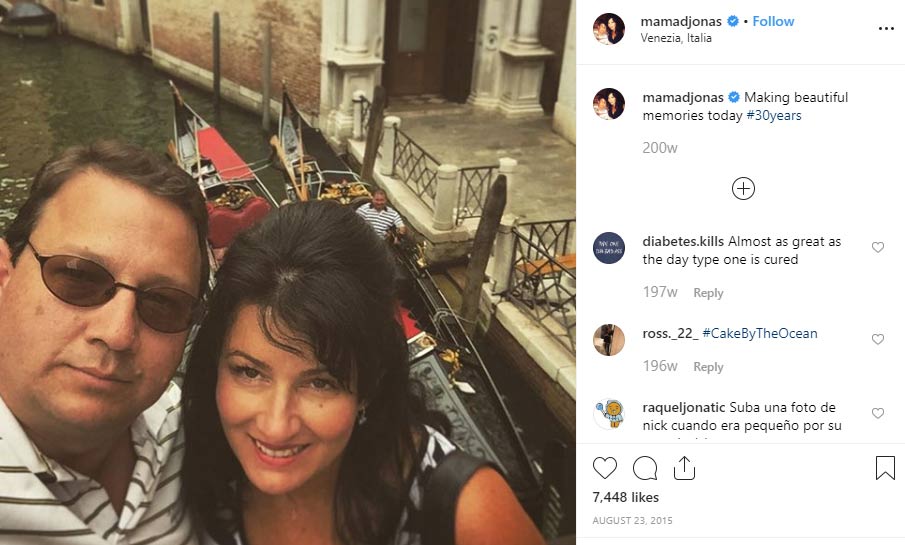 Denise is in her early 50s, and she remains beautiful and fresh in that golden age. The woman is widely known as the mother of the Jonas brothers. But her charisma and optimism helped her to become an independent social media celebrity. She boasts with a massive following both, on Instagram and on Twitter.

Denise was born in Dallas, TX, but she was mostly raised in Phoenix, Arizona. Kevin’s mom grew up in the family of an educator (mother) and postal worker (father). In August 1985 she married her colleague Paul Kevin Jonas. Soon they welcomed their first son, Kevin.

Denise and Paul brought up 4 talented creative sons. Music has been important in their household. Denise used to work as a singer. After the birth of her kids, she found a job at the school’s registrar’s office.

Denise supported her sons when they decided to create the band. She is really close with all her children, including Kevin. 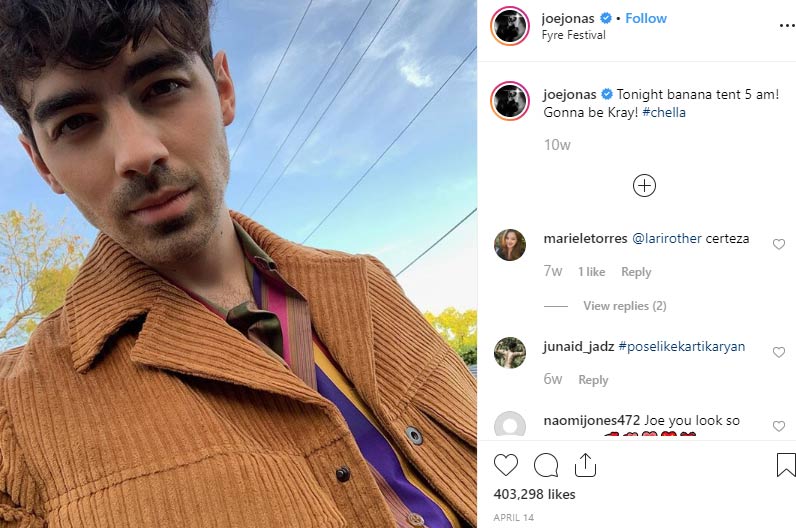 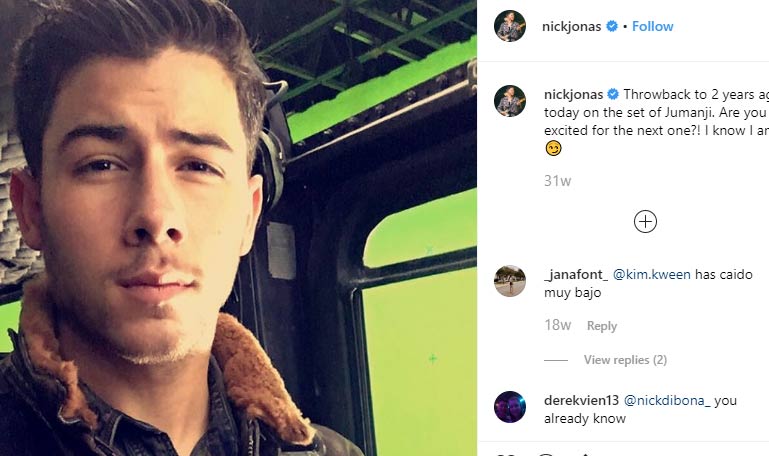 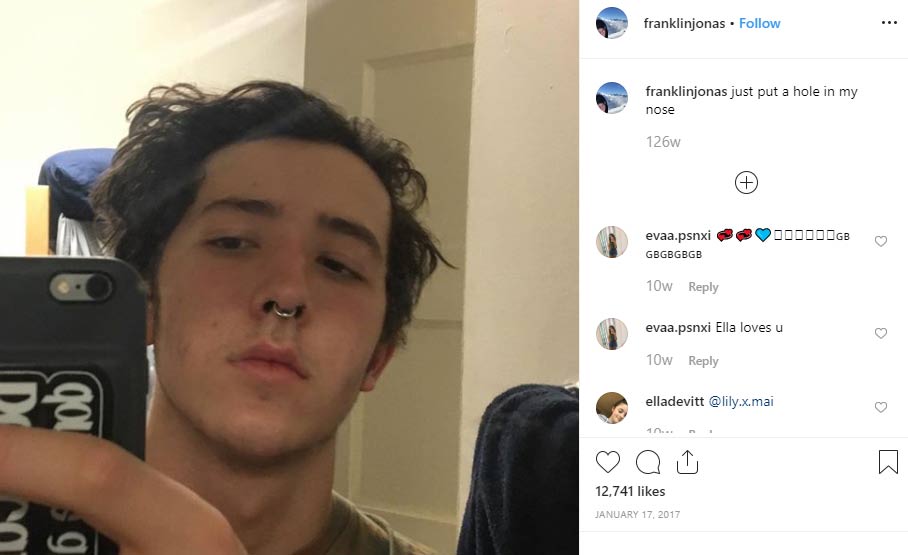 Frankie is the only boy from the Jonas family, who wasn’t a member of the well-known band. The reason is his young age – when the group was created in 2005, when Frankie was in kindergarten age.

The youngest son of Denise and Paul Jonas, he was born and raised in Wyckoff, NJ. Frankie, who is nicknamed as Bonus Jonas, is in his late teens, now. He is a big fan of his brothers’ music, and his favorite song, performed by them, is “That’s Just the Way We Roll”.

Franklin Nathaniel Jonas has multiple interests. He is a fan of football and plays for Jr. Hornets football team. He is an aspiring actor, who has already appeared in several TV projects, including “Ponyo”, the Japanese animation film, on which he worked as a voice actor, and the reality series “Jonas”.

Music is a part of Frankie’s life, too. Not long ago he graduated from a professional audio school (Tennessee’s Blackbird Academy). He is a member of a self-made band “Hollywood Shakeup”.

They say, in 2005 the just formed band “Jonas Brothers” was signed by Columbia Records mostly because of the soft deep voice of Kevin Jonas.

The oldest of three brothers, Kevin caught the hearts of numerous teen girls all over the world. In 2013, after Jonas Brothers had disbanded, Kevin and other boys from the band promised to their fans, that they would have started to perform solo. But unlike his brothers, Kevin hadn’t released his personal set of songs. He left the music industry and turned into a successful businessman and loving father.  The fans heard his soft voice again only on March 4, 2019, when the band reunited and released the single “Sucker”. Hopefully, this song will be included in the long-awaited fifth album of the group.

Kevin was born on November 5, 1987 in Teaneck, NJ. Both of his parents were musicians, so music was an inseparable part of his life.

The boy attended Eastern Christian High School. He made the band with his brothers, which they named “Sons of Jonas”. Their music became popular in the home town. Three ambitious musicians decided to send demos to reputable music producers.

When managers of Columbia Records got the recordings of three unknown teenagers, they decided to refuse them. But Kevin’s voice sounded so unusual and touching, that they decided to give it a try. Thus, Kevin and his brothers signed their first deal.

Jonas brothers turned into superstars – both, in music and on television. But career has never been the main priority of three young men. Their family ties were more important.