Who are Kristina Pimenova parents?

Kristina is a daughter of a retired Russian football player Ruslan Pimenov. He gained incredible popularity as the football forward, which performed at various European clubs. He was also the member of the national football team of Russia. During the years of his career, he gained lots of trophies.

He was born on November 25, 1981, in Moscow, the capital city of Russia. He fell in love with football at an early age, and soon his talent was valued by teachers of the junior football school “Torpedo Moscow”. The boy began to study and train there.

In 1999 he turned from a talented teen football player into a professional one. Ruslan signed his first deal with a popular Russian football club “Locomotive”. Being among the backup players in 2000, just in a year he turned into a leading player of the main cast of the team. Till the year of 2004, he had participated in 52 matches and scored 11 goals.

In 2004-2005 Ruslan was traded by a French club “Metz” and took part in several matches as the member of this team. His play got positive feedback from the managers of the FC, and they initiated negotiations with “Locomotive” to re-sign Pimenov, but the deal was not finalized.

Soon he left “Locomotive” and after that, the talented player performed on the field for a number of other clubs. In 2002 he participated in FIFA World Cup. In 2009 he retired from football, and now Ruslan earns his living as a sports commentator.

He is married to Glikeriya Shirokova and has a daughter Kristina with her. The doting father supports his little girl and tries to develop her interest in the fashion industry. 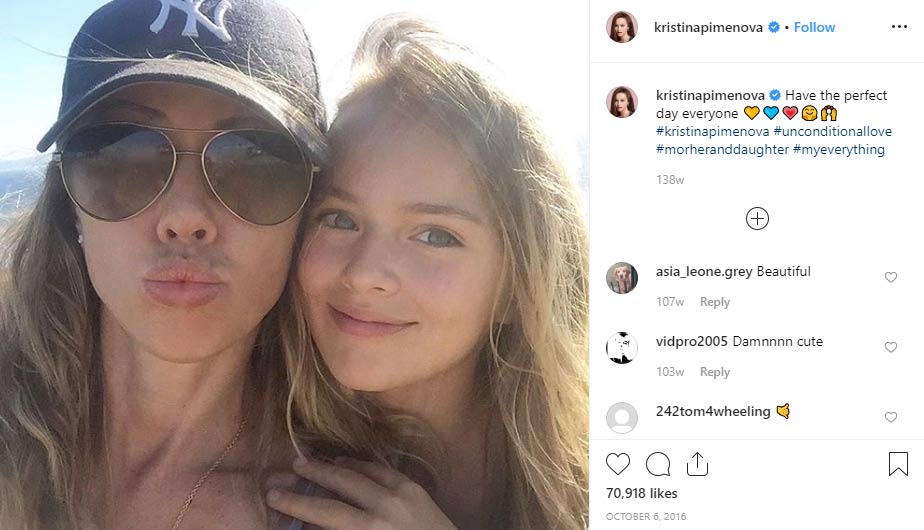 The person, who actually implemented Kristina Pimenova to the fashion world, is her mother Glikeriya Shirokova- Pimenova. The woman doesn’t speak a lot about herself, so the facts from her bio are mostly rumors and the results of journalistic investigations. She was born in Russia and studied Economics in the college. As the woman told in her interview, she used to work as an accountant, but some journalists tell, that she used to be a model, who didn’t achieve a lot in her career.

Now she manages the Instagram account of her younger daughter, whom she welcomed with the famous football player Ruslan Pimenov. Glikeriya and Ruslan met after one of his matches. She was one of the staff members and he played for “Locomotive”. They started dating, fell in love and finally got married. In 2005 the couple welcomed a daughter Kristina.

Glikeriya used to tell, that her little girl was scouted at the age of 3. Her incredible beauty attracted people in the streets, and very often the parents of the pretty girl got proposals from model agencies. Ruslan and Glikeriya discussed the advantages and disadvantages of such an early career start, but then both decided to give it a chance.

Now Glikeriya is very proud of her daughter, who has already appeared in ads for various reputable fashion brands. But she is criticized for making the sex object from her little daughter. The woman denies any kind of such accusations.

Natalie is Glikeriya’s daughter from her previous relationships. She was adopted by Ruslan Pimenov and now bears his surname. The girl is 23 years old as of 2019. She is very close with her younger sister Kristina, and is very proud of her so early and so successful career.

Kristina Pimenova is a child star and a young fashion model. The girl spent her early childhood years in Moscow, Russia.

As her mother tells, very often people approached her and little Kristina in the streets of Moscow and other cities all over the world and advised trying modeling for their girl. Finally, they took their little daughter to the model agency “President Kids”. Kristina started to work at the tender age of 3. Now she is 13, and to that age, she had already modeled for the most famous fashion brands in the world, such as Roberto Cavalli, Dsquared2, Fendi and many others.

Glikeriya, who is the girl’s manager as of now, is sure, that Kristina has a great talent for modeling. Even at a tender age of 3, she could stay in front of the camera for hours, while other kids immediately got annoyed and fussy. And the mother’s belief in her daughter’s talent is proved by numerous achievements and awards of the little girl. She was titled as “the future supermodel” by the reputable issue “Daily Postal”. The other famous magazine, “Women Daily”, named her “the most beautiful girl in the world”.

At the age of 10, Kristina was signed by renowned LA Models Agency, so her parents and sister moved from Russia to USA. Here the girl joins the career of a model and childhood actress with studying at school.