Is Rebecca Ferguson a lesbian/bisexual?

What is Rebecca Ferguson marital status?

Who is Rebecca Ferguson husband?

2 (son Isac and a daughter Saga) 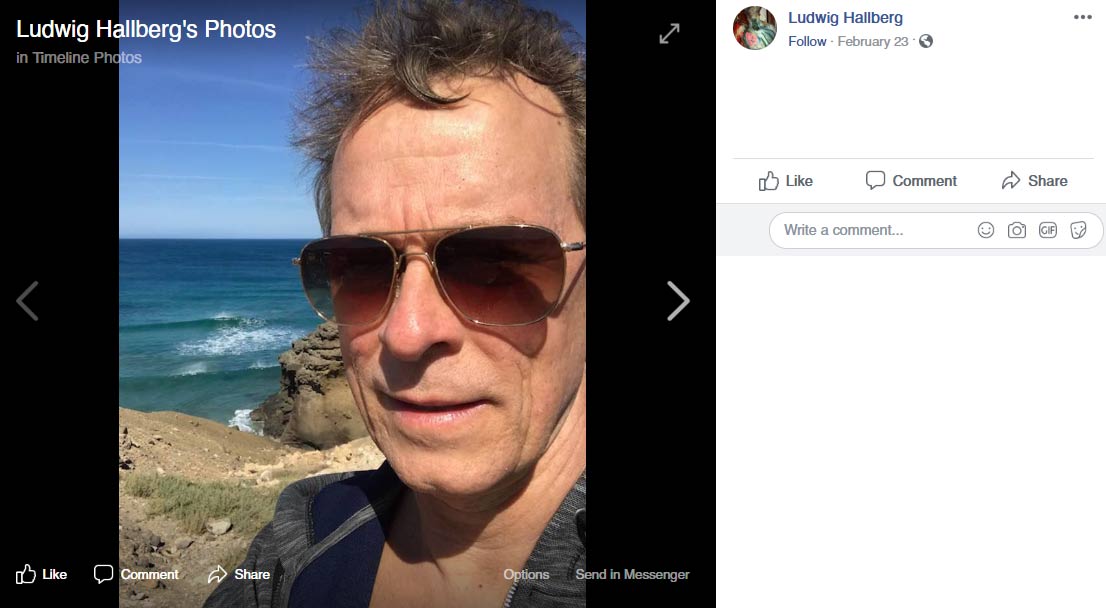 In spite of the fact that Ludwig and Rebecca separated in 2015, they still remain friends. Obviously, they maintain cordial relationships mostly because of their son.

Ludwig and Rebecca met when she has just turned 19, and he was 42. They fell in love with each other and soon moved together. In 2007 the couple welcomed the first and the only kid. Rebecca is a family person (as she always tells in her interviews). To create a happy family with her partner, she left a career of an actress and moved to Simrishamn (a community in the south of Sweden, which is usually referred as a “city”, in spite of incredibly small population there).

Ludwig worked as a mental coach. Later Rebecca and he opened a tango school in the city. But in 2011 their calm life changed. Ferguson met Richard Hobert at the market, and Swedish popular film director invited her to act in his new movie “A Simple to Antibes”. Thus, she was involved in the movie industry again, and it actually ruined her family life.

Nowadays, Ludwig lives with his son in Simrishamn. He still runs a dancing school, co-founded by him and his ex-partner, Rebecca. He spends a lot of time with the famous actress when she is free from filming new projects and comes home. He has friendly relationships with Rebecca’s new husband.

Rebecca Ferguson is a public person, but she is really skillful in keeping her private life out of the limelight. She got married in January 2018 and kept this fact in secret for several days, when finally decided to announce the change of her relationship status in press.

She keeps in secret the surname of her husband but tells that his name is Rory and he is a businessman. The actress doesn’t discover the area of his activity, but she confesses that he can work from anywhere, so very often Rory accompanies her when she is away from home with some new project. Thus, they maintain close family relationships in spite of her tough schedule. In May 2018 the couple welcomed a daughter. 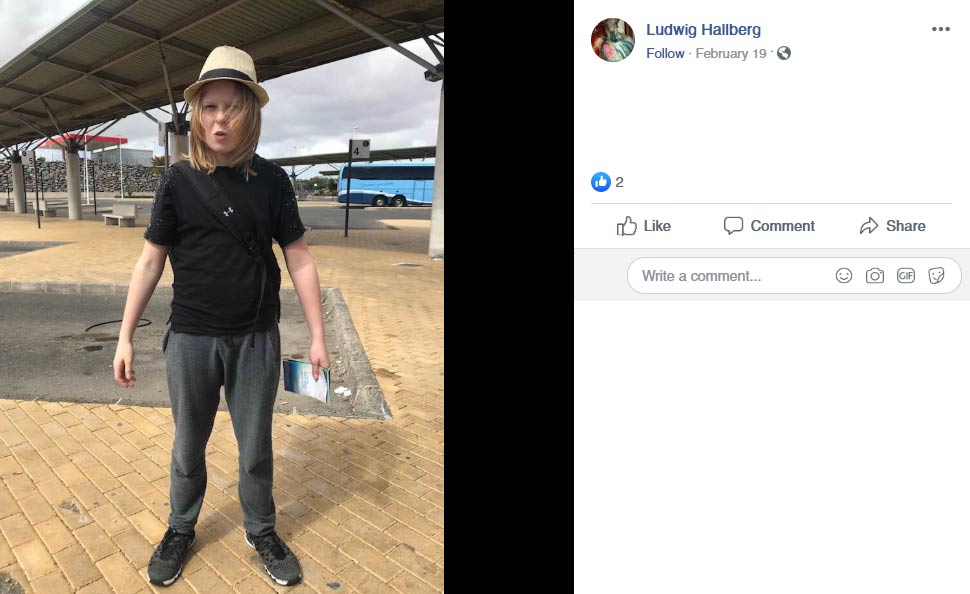 Rebecca opens up to her fans though, that in spite of her busy career, some part of her soul stays at home with her son Isac. The boy lives with his dad in Simrishamn when his mother is on the set or promotes some new film. But he moves to Rebecca’s apartment when she returns to a fishing city to have some rest and recharge her batteries.

The boy studied at Simrishamn School. He watches some new films with his mother, and even repeats some songs from the film “The Greatest Showman”, where his mom appeared as Jenny Lind, the Swedish opera singer, who performed in the circus of Phineas Taylor Barnum (portrayed by Hugh Jackman).

Ferguson tells that her son is a vivid and good-natured boy, although he can be saucy sometimes. 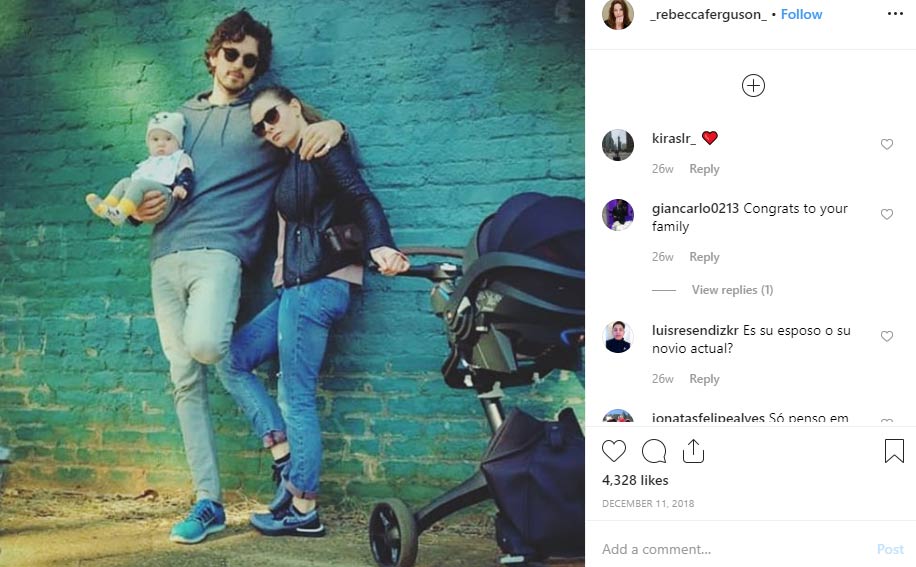 In May 2018 Rebecca gave birth to her second child – a daughter Saga. She kept her pregnancy in secret till the beginning of 2018, when her belly had already become bigger and was hard to cover.

It’s interesting to know, that the actress was heavy with Saga while she was busy at the set of “Mission: Impossible – Fallout”, where she acted opposite Tom Cruise. She made some of the stunts, being pregnant, and her co-stars put lots of efforts to protect tender Rebecca.

She made a short pause in her career to stay with her newborn daughter and then moved on tour with Mission: Impossible cast to promote the film.

Who are Rebecca Ferguson parents?

The actress is very close to her mother, who comes from a British noble family. Rosemary is rumored to be a distant relative of Sarah Ferguson, the ex-wife of Prince Andrew, Duke of York.

Rosemary spent her youth in England, where she partied with many bright personalities of that time, including Sean Connery. Now Rebecca jokes, that he could be her father.

Rosemary moved from England to Sweden at the age of 25. There she got married and gave birth to the future movie star and our today heroine.

Now Ferguson tells that her mother has made a great impact on her. She was the person, working in the field of culture. Rosemary collaborated with many Swedish celebrities of that era, including the cult band ABBA.

It was she, who convinced her daughter Rebecca to try modeling and acting. Now the mother and her stellar child are very close. Recently Rosemary retired and moved from Stockholm to Simrishamn to see her daughter and grandchildren regularly. 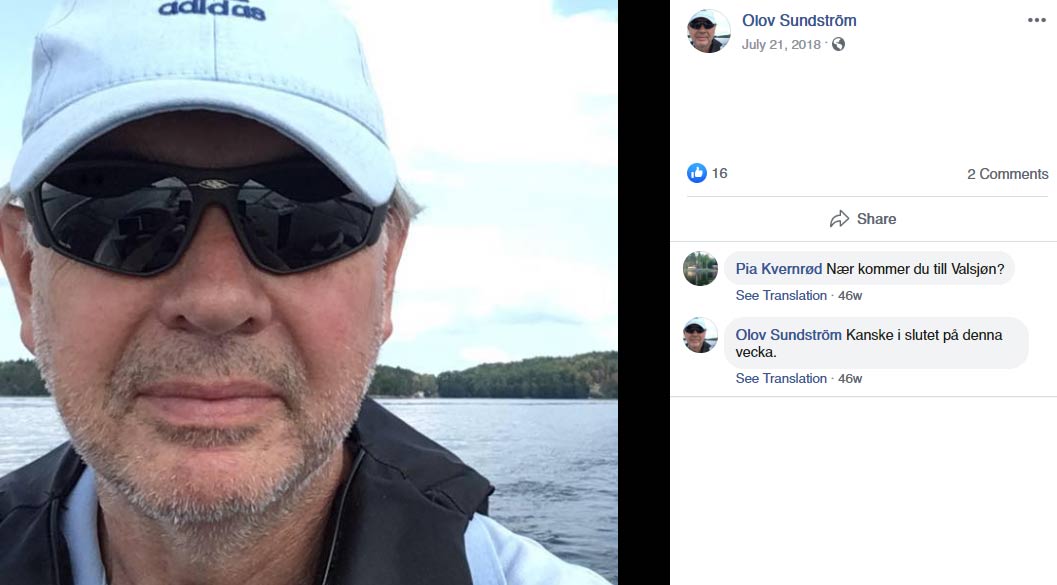 Rebecca Ferguson is the daughter of a successful father. Olov Sundström is a rich businessman and the founding member of a number of Swedish companies. He studied Law and Economy at Stockholm University. Currently, he serves as a CEO of Norstedts Juridik, the company, which provides juridical services.

Although Olov separated from Rebecca’s mother when his daughter was still a kid, he maintained cordial relationships with her and he is very proud of her achievements. Olov resides in Sollefteå, Sweden as of now. He is married to Lena Elizabeth Sundström, who is one year older than him.

Rebecca has a younger sister Maria. The girls can’t see each other very often, but they stay connected via phone and personal messages. Maria is proud of her big sister and considers her a role model for herself. The young woman lives in Lidingö (the east of Stockholm) and is in long-term relationships with Sebastian Wallin. 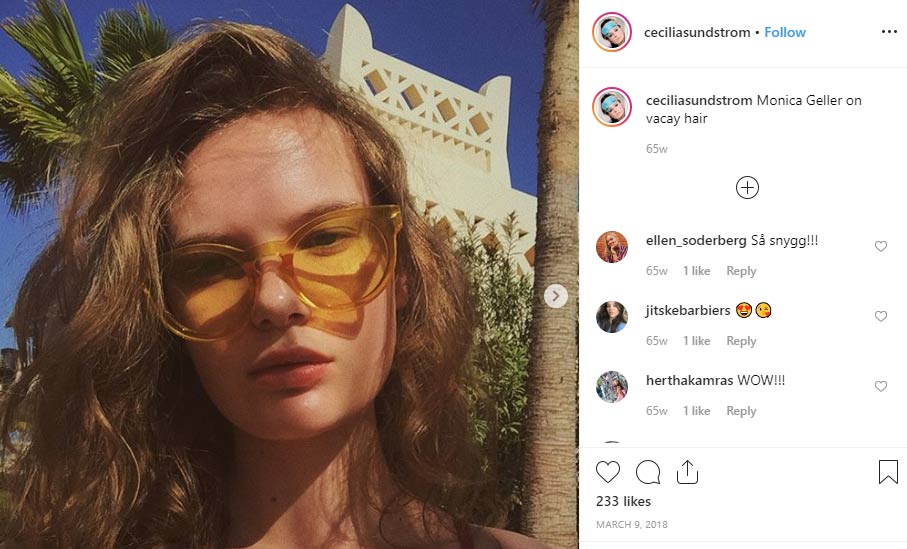 Cecilia is another of Rebecca’s younger sister. She has just turned 20, and a year ago she moved from her parents’ home to a rented condo. Now the girl lives independently. She earns her money as a model. Cecilia is closely-knitted with Rebecca. She has even visited her sister at Mission: Impossible set and made a cute photo with Tom Cruise.

Rebecca Ferguson has one more sibling, whose name is undisclosed.

Rebecca Ferguson is an internationally popular actress, who has appeared in a number of box office hits, such as “Hercules”, “Florence Foster Jenkins”, “The Snowman” and many others. Recently her fans have watched her great play in “Men in Black: International”, where she portrayed Riza, an alien.

She was born in Stockholm, Sweden in the family of a Swedish father and English mother. She absorbed the culture of both of her parents. The actress is bilingual; she is familiar with English history, which later helped her to get some roles in English and American films.

Rebecca studied at a prestigious Adolf Fredrik’s Music School. She started to earn money on her own at the age of 16 – the girl was signed with a model agency. As she confessed later, she hated that job, because the fashion industry is too focused on physical beauty, which usually takes the woman into a prison of insecurity.

In 1999 she quit modeling and moved her way on television. She was cast as Anna Gripenhielm in the soap opera “Nya tiger”, which was on air for 2 years. Rebecca appeared in 54 episodes of the show.

In the early 2000s, she still wasn’t sure that acting was her cup of tea. She made a pause in her career and traveled to Thailand. Then she returned to Sweden, fell in love with Ludwig Hallberg and settled in a small community of Simrishamn with him. They opened a tango school, and during several years Rebecca was just a dance coach. But in 2011 she returned to the movie industry.

The actress widened her borders and became popular not just in her home country, but all over the world after the main role in drama series “The White Queen”, which was demonstrated in USA and United Kingdom. The actress got the Golden Globe nomination for this screen work. She added some kudos as a big screen actress due to her talented play in “Mission: Impossible – Rogue Nation” in 2015.