Is Lily Collins a lesbian/bisexual?

What is Lily Collins marital status? 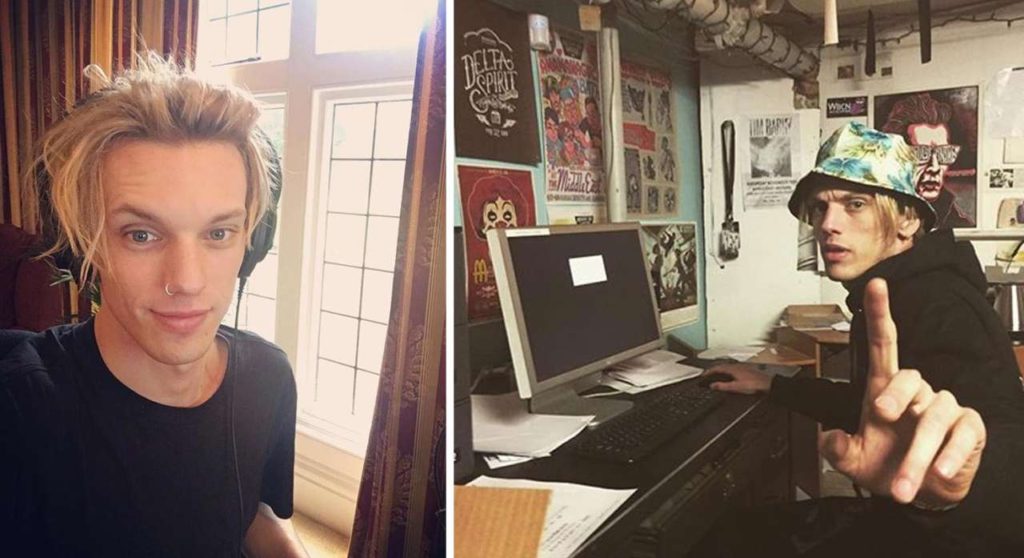 Twenty-nine year old beauty Lily Collins has never been married. But she dated several rich and popular men, like Taylor Lautner and Zac Efron. Her current boyfriend is an actor Jamie Campbell Bower.

His born name is James Metcalfe Campbell Bower. The future movie actor and musician was born in 1988 in London. He has been familiar with entertainment industry since childhood as the boy’s mother Anne Elizabeth Roseberry is a music manager, and she used to work with the popular band “Kashmir”. When Jamie turned 10, his mother took him with her to USA, where “Kashmir” recorded the album “The Good Life”. That experience inspired the boy to become an entertainer too.

Nowadays he is known as an actor, musician and model. He dreamed to play the lead role in Harry Potter franchise, but a brutal joke at the audition made producers turn him down. Later he appeared in one of Harry Potter films, but not as the main hero.

The most popular Jamie Campbell Bower films are The Twilight Saga movies, “London Boulevard”, the series “Camelot” and some others. 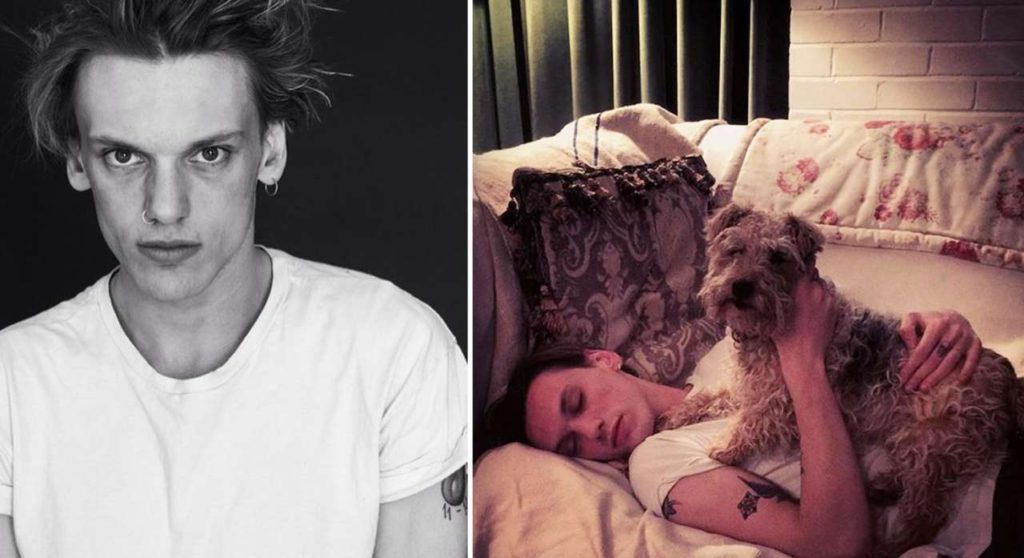 In addition to acting career, Jamie is the lead singer of an English punk rock band “Counterfeit”. In fact, Jamie Campbell Bower is really busy with his numerous projects, but he finds time to date one of the most beautiful girls in the world.

He met Lily Collins at Mortal Instruments film set and immediately fell in love with his co-star. They started dating in 2012, but their love lasted during one year only. Then they split, and Lily opened up in her interview to “Mirror” that she dreams to meet a person, who will make her laugh.

But in 2015 lily and Jamie started to follow one another in Instagram. They gave each other so sweet and romantic comments, that their fans suspected, two young stars reconnected in their relationship.

They had on and off relationships during 6 years, but in winter 2018 decided to part their ways. Two stars maintain amicable relationships.

Who are Lily Collins parents? 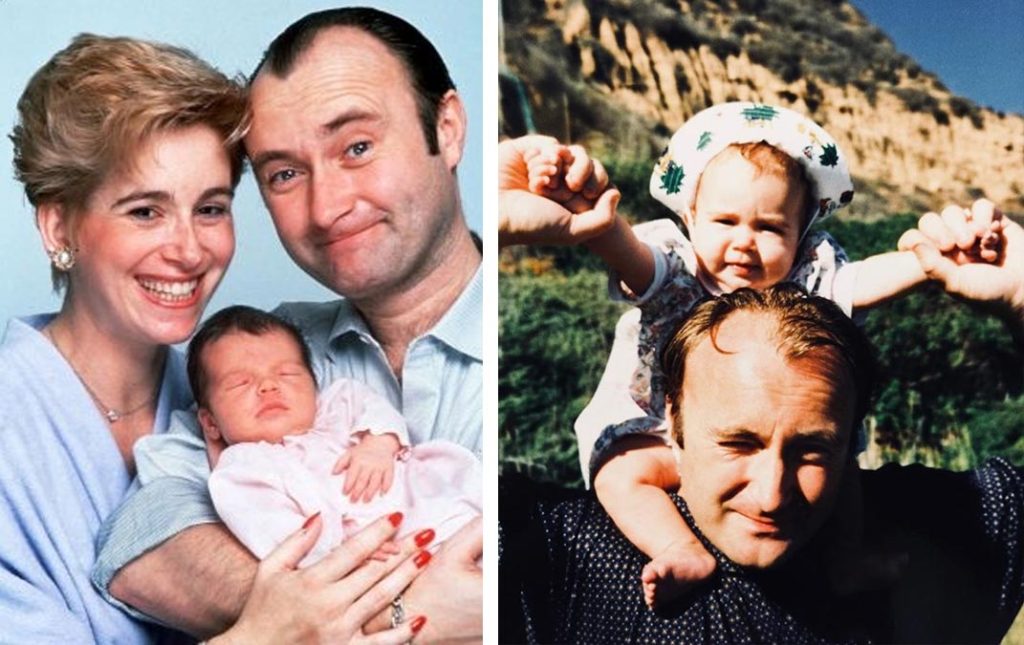 The model and actress Lily Collins had a good role model in front of her eyes in her early years. She is a daughter of a talented and famous father Phil Collins, the popular English musician, whose career peak was in 1980s.

Phil was born in London, UK in the family of an insurance agent (father) and a talent manager (mother). Lily Collins has four half-siblings from her father’s side.

Phil was crazy from music in his early years. When the boy turned 5, he got a special present for birthday – toy drums. Probably, that was a moment, when he decided to become a musician.

Collins attended Chiswick Grammar School, but he left it at the age of 13 to act in the play “Oliver!”. Later Phil entered Barbara Speake Stage School, thus having made a final choice in favor of career in entertainment industry.

The actor and musician Phil Collins found his stardom as the drummer of the cult band “Genesis”. In early 1970s it turned into the popular English rock band, one of the best in the industry. In 1975 the lead singer of “Genesis” left the band. Phil Collins used that chance and occupied his place. 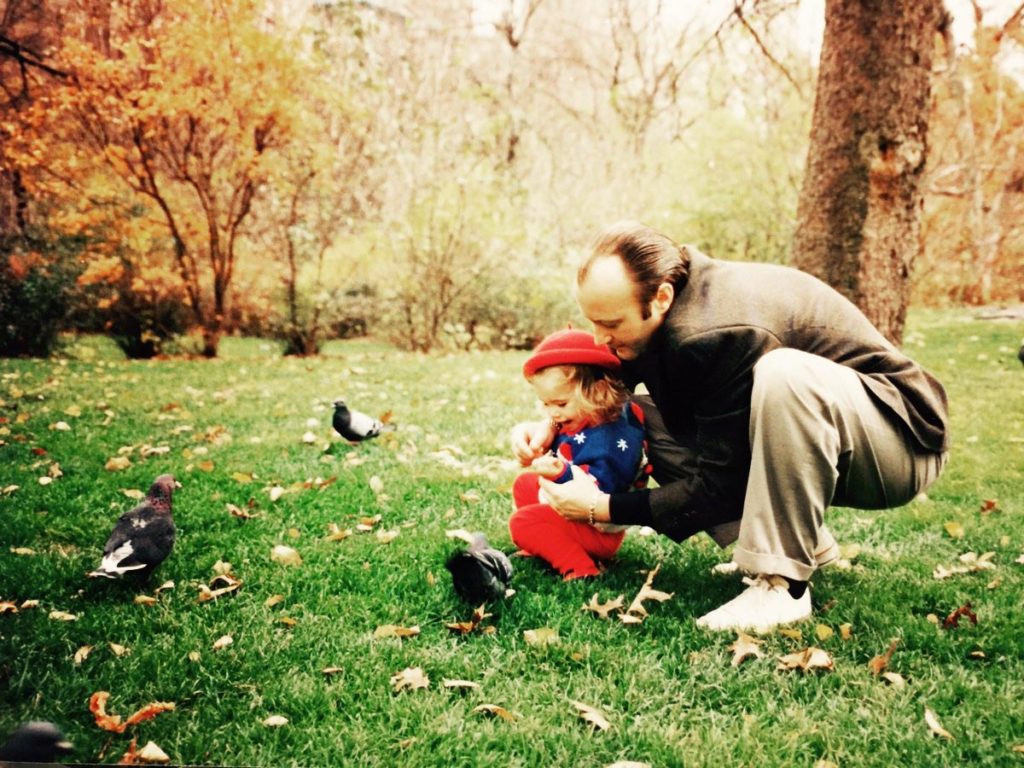 In 1981 Collins decided to start solo career. But that doesn’t mean, he left “Genesis”. The talented musician and ex-child actor managed to combine these two activities and succeed in both of them. He released the solo album “Face Value”, which gained gold status.

Phil Collins has become an internationally popular star. He gained large experience, and that inspired him to help young performers find their ways on top. He produced the albums of John Marlyn and ABBA.

Being extremely busy with recording new singles and starting new tours, Phil found the time to start a family. Although his personal life was full of ups and downs, he gave the world someone great – a daughter Lily Collins.

Phil Collins was married 3 times. His first wife was Andrea Bertorelli, his school sweet heart. They have a daughter Joely Collins and a son Simon Collins (Lily Collins half-siblings).

In 1984 Collins married Jill Tavelman and they welcomed our today heroine – Lily. Unfortunately, the couple divorced in 1996. 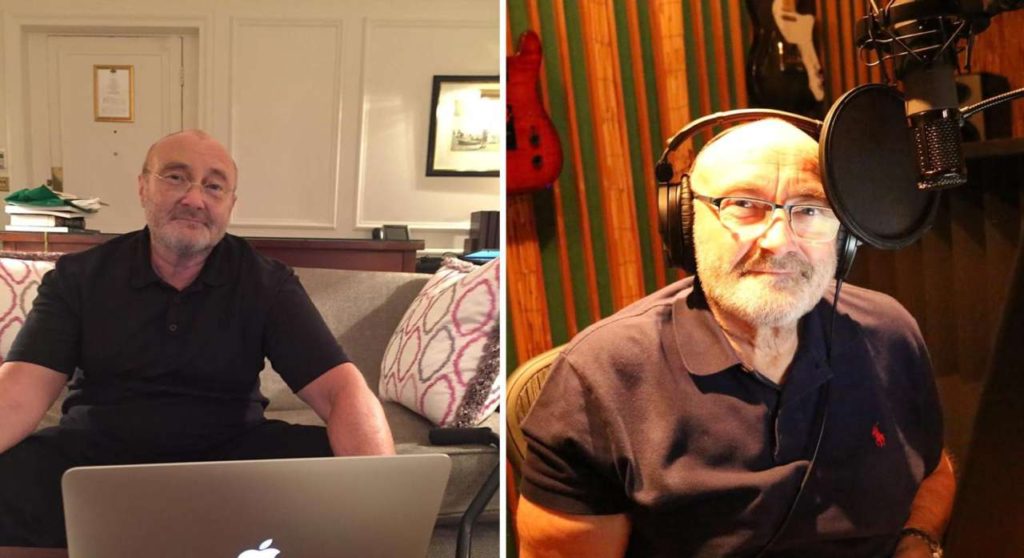 After that Phil wedded Orianne Cevey three years after separation from Lily Collins mother. With Orianne they had on and off relationship. The couple divorced in 2008, and later Collins confessed, that he had alcohol problems. In 2011 the musician announced his retirement, as spinal surgery prevented him from playing drums.

In 2016 he reconciled with Orianne Cevey. They have two kids – Nicholas and Matthew Collins.

Phil Collins told in his interview to “Rolling Stone” that he spent not so much time with his older children, in comparison with his younger ones.

In fact, Lily Collins and her talented father had complicated relationship. Phil left Lily’s mother because of his new lover Orianne Cevey. His departure hurt the girl. Later Lily presented a book “Unfiltered: No Shame, No Regrets, Just Me”, where she wrote a letter to her estranged dad. The girl forgave him all his mistakes and told that they “have to move forward, because it’s not too late”. But it seems that now Lily and her father try to make up for lost time. 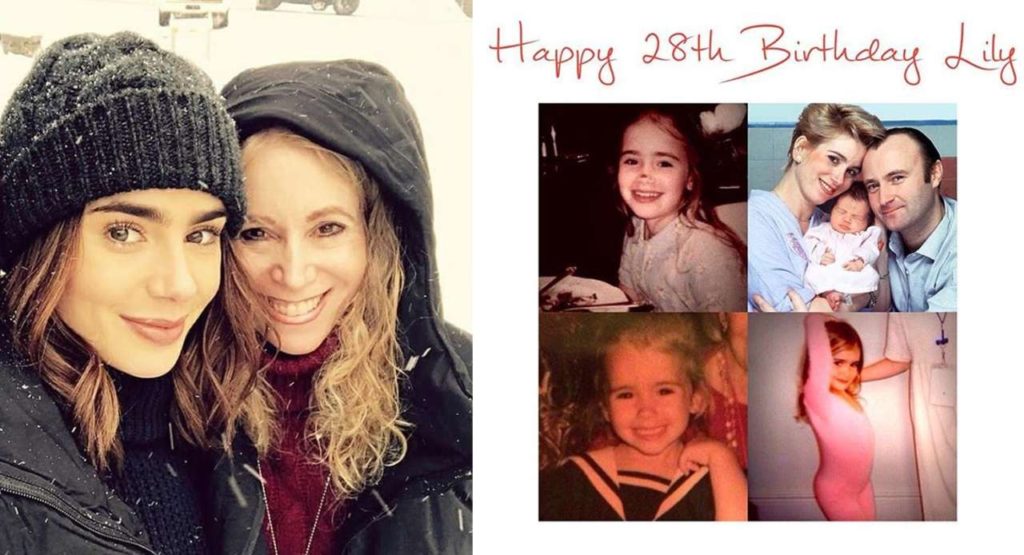 Jill Tavelman Collins resides in Los Angeles, and her famous daughter Lily lives not far from her.

Jill was born in 1956 in LA, California. She has never been a celebrity, although tried her hand as an actress once or twice and appeared in several films.

Lily’s mother earned her living as the President of Beverly Hills Women’s Club.

In 1980 she met a Genesis frontman and drummer Phil Collins. They fell in love and started dating. Only 4 years later Phil dared to propose Jill. They tied a knot on August 4, 1984. Five years later Phil and Jill welcomed their only common child – a daughter Lily. Unfortunately, Lily Collins parents’ didn’t make their marriage work. They separated in 1994 and two years later they divorced. 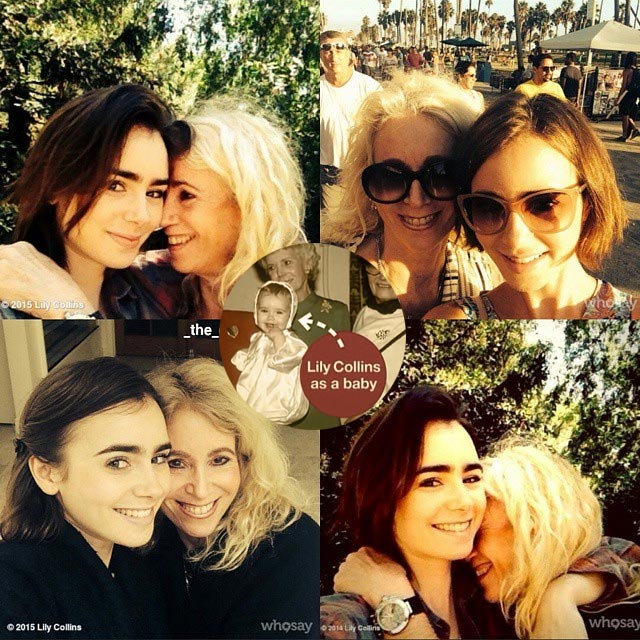 In his autobiography Phil Collins confessed, that he was a kind of a bastard. He let his love life to “hurt people around him”. In fact, Phil left Jill and their daughter Lily because of his love affair to a Swiss translator Orianne. He asked his wife Jill for divorce through fax. They started a long and hard divorce process, and Jill got £17million paycheck from her ex-husband after a court battle.

Nowadays Jill leads life of a socialite. From time to time she is caught by paparazzi, shopping with her beautiful daughter. 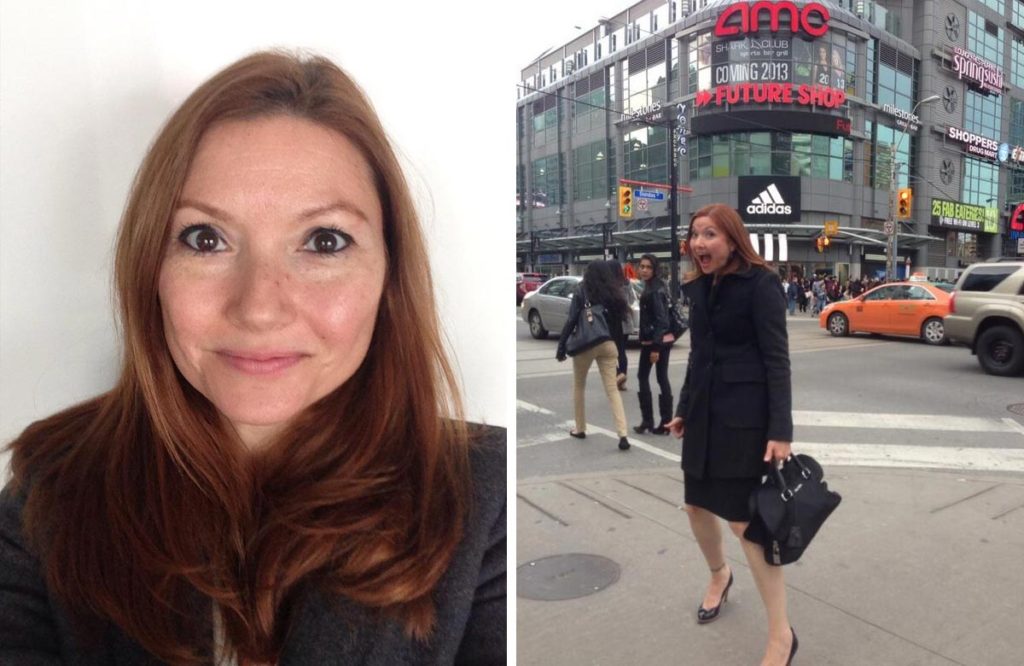 Joely Collins seems to be in good terms with her younger half-sister Lily Collins. When To The Bone actress released her book “Unfiltered”, Joely congratulated the girl through social media and told that she “was proud of her”. It is even hard to believe, that Joely is not Lily’s sister from biological point of view. Lily’s father Phil Collins adopted Joelly, when he wedded her mother Andrea Bertorelli. And from that moment he has become her role model and inseparable part of her life.

Joely was born in Vancouver, Canada. From the earliest age she dreamed to become an actress. Joely was educated at The Vancouver Youth Theater. She continued her studying at the Royal Academy of Dramatic Arts.

Phil Collins stepdaughter achieved a lot to her 45th age mark. She starred in a number of popular movies and TV series. Joelly rose to fame as the actress of Canadian teen drama “Madison”. Later she continued to climb the success ladder and participated in “Cold Squad”, “The Final Cut” and “Kick Me Down”.

In 2008 Joely wedded Stefan Buitelaar. The happy couple welcomed a nice baby girl. Being a mother of a toddler, Joely founded production company “StoryLab Productions”. Together with her partners she produced the film “Becoming Redwood”, which won a number of awards. 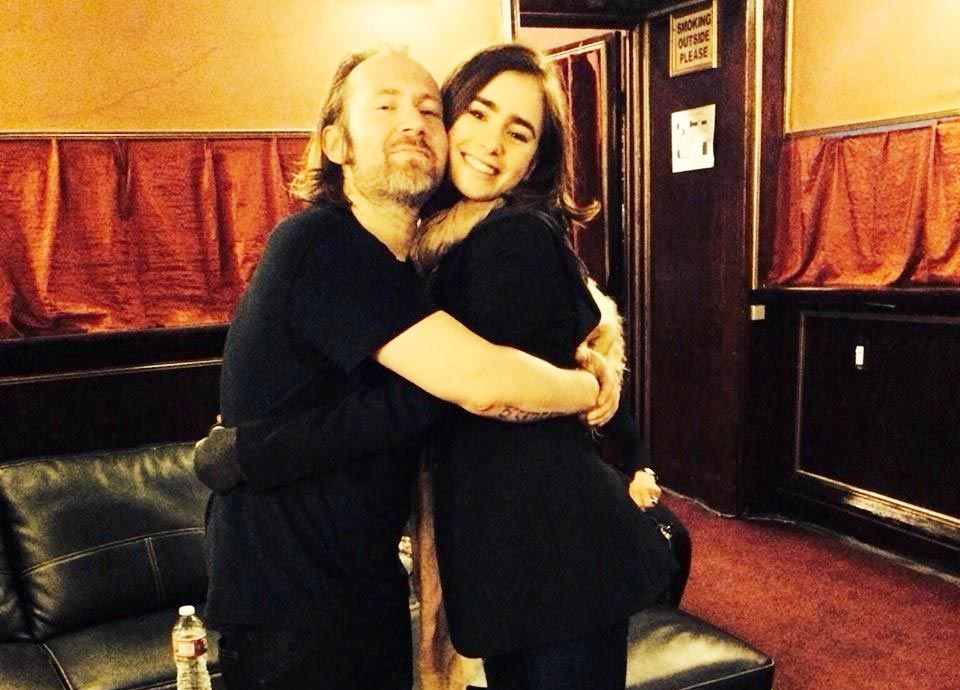 Simon Collins is Lily Collins older half-brother and the first biological kid of her father Phil Collins and his first wife Andrea Bertorelli.

Simon Philip Nando Collins was born in London, UK but was raised mostly in Vancouver, Canada, where he moved together with his mother and older half-sister, following their parents’ divorce.

Like his famous father, Simon shared his time between studying at Point Grey Secondary School and playing drums. Although the boy was interested in astronomy and social studying at school, he decided to devote his life to music.

Lily Collins brother started his career as the part of the band “Jet Set”, but soon he left the band and decided to start a solo trip. He signed the deal with Warner Music and released his first album “All of Who You Are”, which made him popular.

As for now, Simon Collins boasts with three studio albums and a number of successful singles. He is also the co-founder and member of the rock band “Sound of Contact”.

Nicolas Collins, widely known as Nic, is Phil Collins son with his third wife Orianne Cevey. And he is Lily Collins younger half-brother, of course.

Nic spent his early years in Switzerland and dreamed to become a soccer player. But his father inspired the boy to try music, and Phil gradually was involved into this area. When he moved to Florida with his mother, he founded the band “What You Know” with a number of school friends. In August, 2017 Nic played drums in front of thousands of viewers at U.S. Open, while his father was singing.

Currently Phil attends high school and joins it with playing in the band. He plans to make music career.

Matthew Collins is the youngest kid of a cult musician Phil Collins and Lily’s youngest half-brother.

The boy was born in 2005 in Switzerland. A year after his birth his parents divorced. He moved with his mother and older brother to Miami, Florida. Matt is too young to have any career ambitions. The boy studies at a secondary school and appears in front of the cameras, when visits various public events with his father and mother. For example, not long ago Matthew was photographed alongside his older brother and father at New York Knicks match. The father and his sons seemed to have a great time together!