Is Jamie Oliver a gay/bisexual?

What is Jamie Oliver marital status?

Who is Jamie Oliver wife? 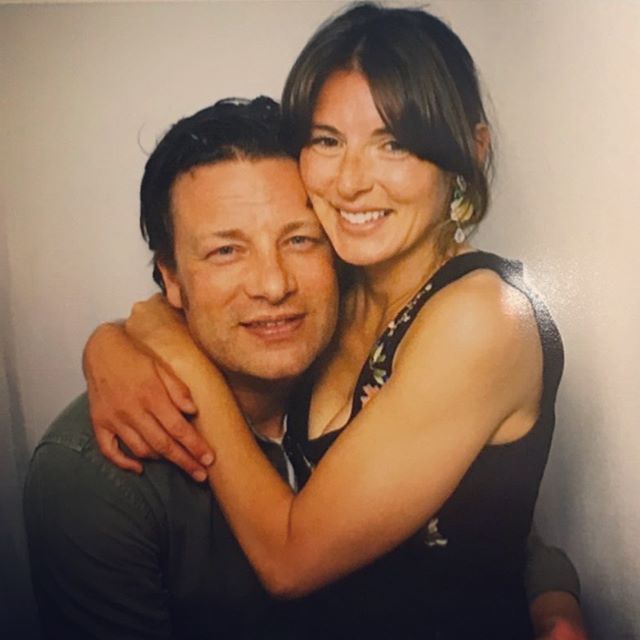 Oliver is a celebrity, but his lifestyle is more typical for a self-controlled English gentleman. He still drives his old scooter and starts his working day at 5.30. Besides, he has been married to the same woman since June 24, 2000.

He met Juliette Norton (her maiden name) at the tender age of 18 when both were students of a culinary school. Before becoming Mrs. Olivier, she worked as a waitress and later as a model. For some time, she was working as her husband’s assistant.

Jools and Oliver parented five kids. Mrs. Oliver likes being a mother so much! She dreams to have another kid, the sixth one, despite all troubles parents of the newborn have – like the rest of sleep and lots of anxieties. In one of her interviews, she shared, that she had a miscarriage, and that bad experience turned to be very painful for her.

Many people think that their couple is a typical old-fashioned family, where a husband works from morning till night, while his wife enjoys a calm family life in his shadow. Nevertheless, Jools is not shy at all (at least, many of her interviewers express such opinion). She is not just a full-time mother, Mrs. Oliver finds enough time for business gigs, too. Several years ago she tried her hand as a baby clothes designer and created the fashion collection for “Mothercare”.

Poppy is the first child in the family of Jools and Jamie. She was a desirable kid, and Jools had to pass a two-year treatment to get pregnant with her. As her mother described the girl on Instagram, she was easy-going and calm baby. Thus, she made Mr. and Mrs. Olivier’s first parenthood experience so great!

As of 2020, she has graduated from school. The girl keeps her private life out of the limelight, so it’s not known, what career she decided to pursue.

Many children dream to have famous parents, but not Poppy. She felt very shy at school if her classmates asked her to bring an autograph of her father. Besides, she didn’t want Olivier to take her home from school as it could attract too much attention. So, that was her mother’s duty exclusively. 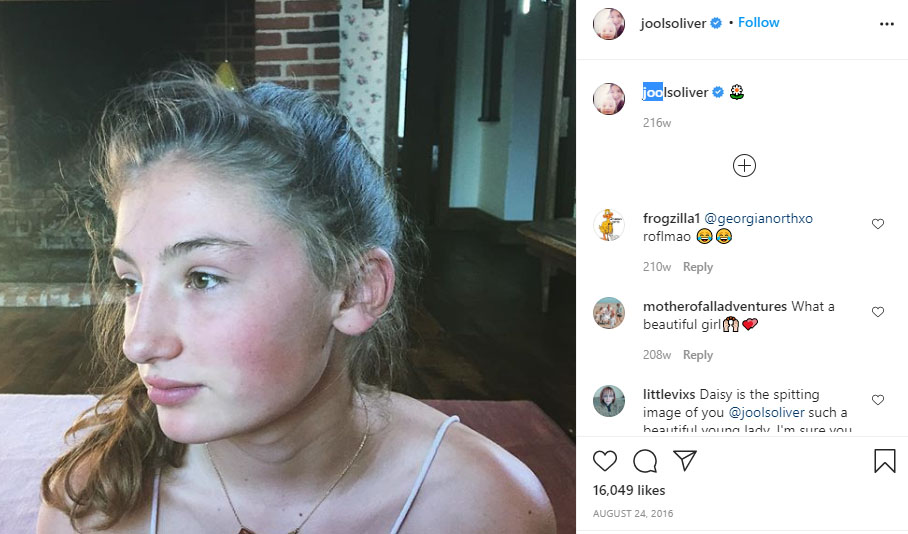 The second child in the family of Jamie and Jools Oliver is named Daisy. The chefs’ fans have already seen her pretty open face.

The girl has already graduated from school and left her parents’ home. She went on to study. It’s a pity, but her parents didn’t share, what profession she had chosen.

Petal was born on the early spring morning and became the third girl with a “floral” name in her parents’ family.

The girl is a frequent guest at her parents’ Instagram account. The Mother Jools tells, that Petal is a friendly joyful little girl and the best sister for her siblings.

The first but not the only boy in Oliver’s family is cute and kind-hearted. His mom shared the info on social media about Buddy that he never forgets to help his parents with their charity projects on Christmas. Besides, he is especially kind to his youngest sibling River and often babysits him.

River is the youngest edition of the big family. Her mother Jools hopes, that she is not the last baby she had given birth to.

In any case, she is the real gift for her parents and older siblings, who pamper her a lot.

Who are Jamie Oliver parents? 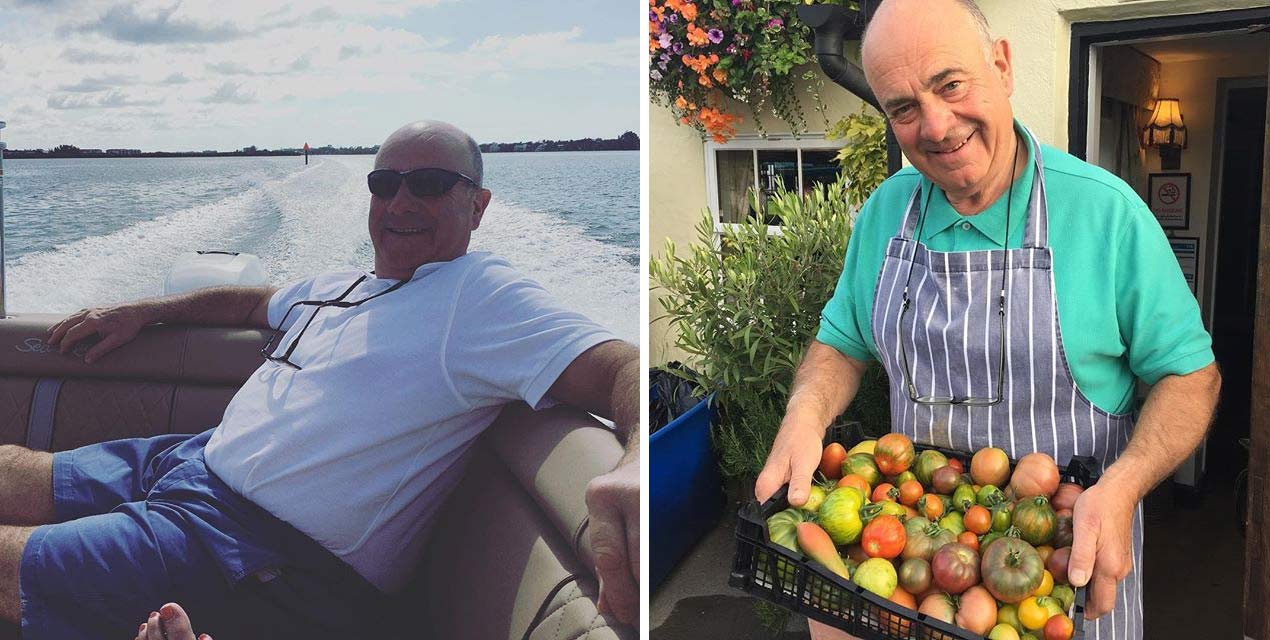 Yes, you’ve got it right, Jamie inherited his love to culinary from his father. By the way, Mr. Trevor Oliver was his first teacher and supporter. Besides, he was Jamie’s first employer – the legendary chef started his career at his father’s restaurant.

Trevor Oliver was born and raised in England. Being the son of two pub owners, Trevor helped his parents to manage a pub “The Plough and Sail”. He refined his natural talent to culinary with great education – Trevor studied at Southend Catering College and was ranked as “Student of the Year” there. He worked as a chef at the restaurants in France and Switzerland. After that, he returned home and married the beautiful shy girl Sally. They immediately realized their dream and founded the pub “The Prince of Wales”. They ran the pub for two years before moving to North Essex. In 1976 they opened the pub “The Cricketers” there, and now it is one of the most reputable eating venues in the area.

Jamie’s mother is named Sally Oliver. She is a real English woman. Sally lived in London and earned her living as a bookkeeper, but she left her job after she had married Trevor. After that, she joined him and they both started to develop the family pubs. Now she is one of the founders and owners of “The Cricketers”. Besides, she is a mother of two kids – a son Oliver and a daughter Anne-Marie. 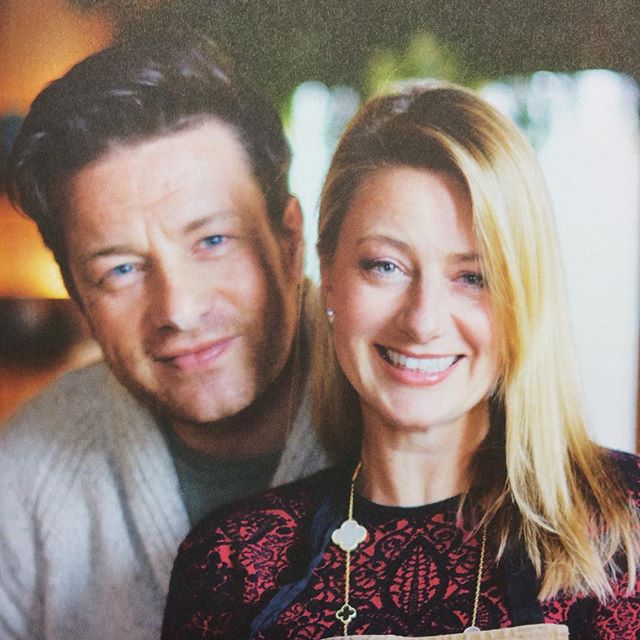 Anne-Marie Oliver is Jamie’s only sister. The famous chef named his younger sibling as “his best friend” in a sweet post on Instagram once.

Anne-Marrie lives not far from her brother’s place, in a lavish £2 million mansion with her husband Paul Hunt (they have been married for decades as of 2020) and their three sons.

In 2014 Jamie accepted his brother-in-law Paul in his office. Mr. Hunt was supposed to run Jamie Oliver Ltd and made the culinary empire even stronger. Unfortunately, his methods turned to be too ruthless, and the experts think, the bankruptcy of Jamie Oliver Restaurant Group was caused by Paul’s wrong decisions.

Nevertheless, a brother and a sister maintain warm relationships until now. One of Anne’s sons, Jamie Hunt, is named after her brother.

Jamie Oliver’s biographers joke, that he had no choice and was supposed to become a chef just at the moment of his birth. The son of two restaurateurs, he liked to be in the kitchen and absorb its tastes and smells from the earliest age. At the same time, he wasn’t so interested in school subjects. The boy had dyslexia, and he read his first novel at the age of 38.

He was just 8 years old when he started to work in the kitchen of his parents’ pub. He did simple easy jobs at first, like peeling and cutting the vegetables. Later he started to cook himself. Thus, at the age of 11, he had a regular job and a constant income, really solid for a middle school pupil.

After graduation from school, he studied home economics at Westminster Kingsway College. After that he spent some time in France, studying the delicious cuisine of that country. Later he found a job at The River Café, Fulham. The calm flow of his life was changed after the visit of BBC reporters, who had to create a documentary about The River Café. Jamie looked so natural on the screen, that he immediately was offered a job on TV. Thus, he started his first culinary show “The Naked Chef”. That was the beginning of his super successful brand.

Nowadays, Jamie Oliver’s culinary empire boasts of numerous culinary shows, lots of culinary books, and a website with many recipes. Previously, Mr. Olivier owned a chain of restaurants, but in 2017 it went bankrupt and was closed.