Is Sam Taylor-Johnson a lesbian/bisexual?

What is Sam Taylor-Johnson marital status?

Who is Sam Taylor-Johnson husband?

But despite the criticism, the first film of the three-part story was watched and re-watched by millions of people (the next two parts were shot by another director James Foley). Probably, Sam managed to find something forbidden in the deepest depth of everybody’s soul, about which everyone is afraid to confess to oneself, but can feel it while watching this film.

We believe that this great woman deserves to tell you her story. And her story is breathtaking!

Yes, you’ve already read about this blue-eyed heartthrob, if you follow our publications. If not, then check “Aaron Taylor-Johnson family” for the information. There you can read about Sam and Aaron’s daughters Wylda and Romy, too. And now let’s speak about her ex-husband and two oldest children. 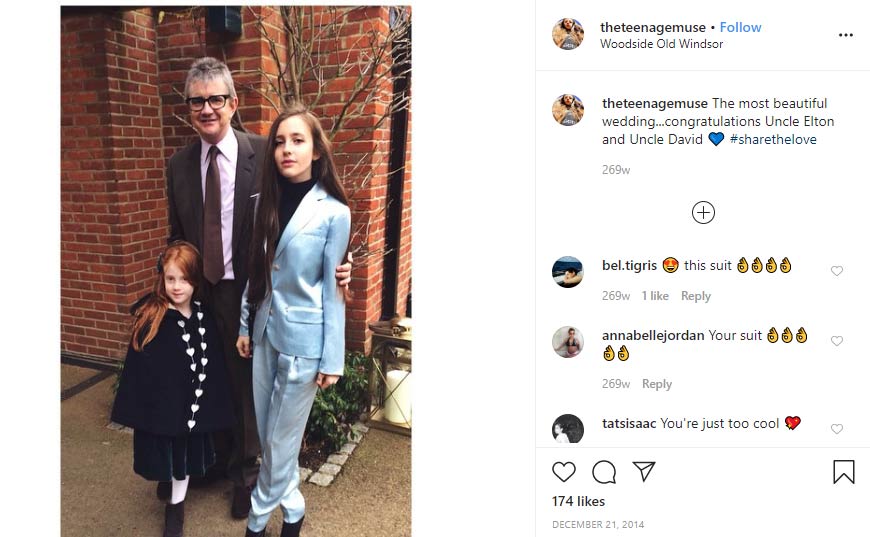 “I love to sell and I love to bring my ideas to life”, once told the British famous art dealer and gallery owner Jay Jopling. He enjoys great popularity in the wide circle of art lovers and he is considered as the person, who made contemporary art well-sold in his home country. He maintains the super successful art gallery “White Cube”, which huge comfortable building is often visited by the richest British people and celebs.

He was born and raised at a huge farm in North Yorkshire and graduated from the prestigious Eton. He started to earn his living as a fire extinguishers’ seller and reached the highest level of success in this activity to the great astonishment of his father Michael Jopling, who was known as the right hand of the Prime Minister Margaret Thatcher.

Jay fell in love with Sam Taylor-Wood, as she was called then, in the 1990s, after their meeting in his gallery. She was the young artist, who demonstrated her works in his gallery. In 1997 they tied a knot and welcomed two daughters. After 11 years of married life, they separated, very quietly and amicably. 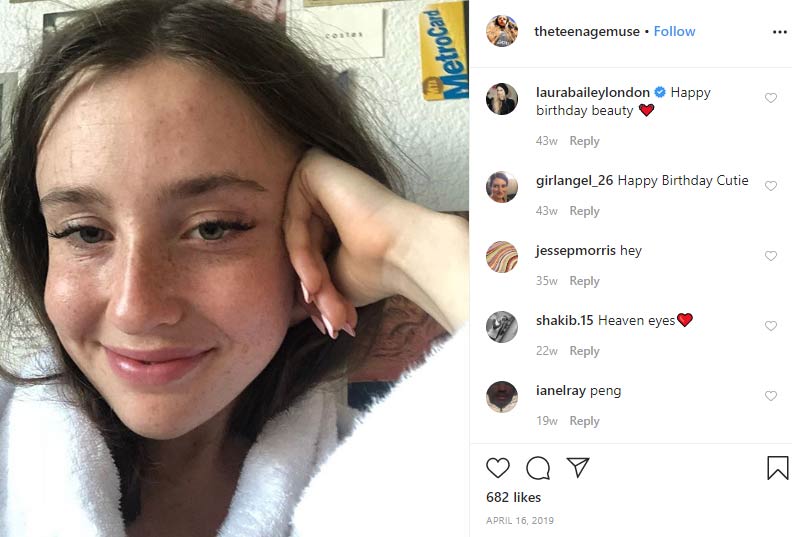 Just one glance at Angelica Jopling Instagram page is enough to understand that she is privileged. The girl, who grew up in a rich respectable family, surrounded by contradictory art objects, seems so deep and vulnerable at the same time.

The first daughter of Sam Taylor-Wood and Jay Jopling was surrounded by special people since her birth. Her elegant paternal grandparents are her heroes till now. Her godmother was the heroin-addicted socialite Annabelle Neilson, whose tragic death in July 2018 from “a stroke” as it was officially announced in the media, influenced Angelica a lot.

Ms. Jopling has already tried her hand as an actress and appeared in her mother’s “Nowhere Boy”. But she wasn’t affected by the acting bug, that’s why she left it. Now the girl studies art at Stanford University and volunteers for the non-profit organization “Hope and Homes for Children”. 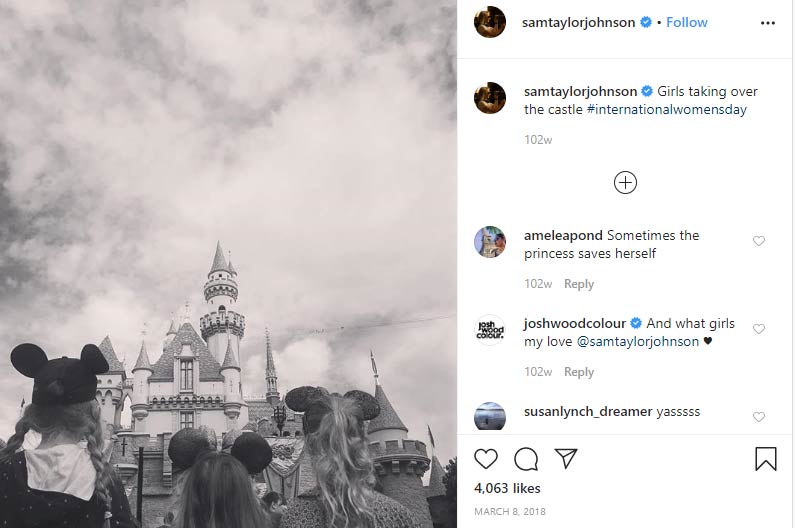 Jessie Phoenix Jopling is Sam’s daughter Number Two with her ex-husband Jay Jopling. The shy teenager, Jessie stays out of the media, that’s why not many of her pictures can be found in the Net.

She resides with her mother and stepfather in Los Angeles. The girl is a school pupil. She is too little to think about her career as of now (in 2020), but she has already told that acting seems to be interesting for her. We’ll see!

Who are Sam Taylor-Johnson parents?

Not much is known about the father of the talented artist Sam. He left the family when the future film director turned just 9. The major part of his life he devoted to his career – the man worked as a chartered surveyor and then was appointed as the treasurer of the motor club “Hells Angels”. It seems that Sam and her dad are not so close.

Sam’s mother is a slim fragile woman, named Geraldine Wood. The mother of three, Geraldine was into yoga since the earliest years and devoted the major part of her life to it. She left Sam when the girl was just 15. That terrible day the girl woke up in the morning and found a message, where her mum told, that Sam and her younger sister had to live with her husband (Sam’s stepdad) since then. Mrs. Taylor-Johnson found her mom in Australia, where the woman resides till now. She passed through many troubles and has quite rocky relationships with Sam. “But still I want to support her and to have her in my life”, the film director tells.

Geraldine lives in Queensland, Australia with her third husband David De Welles. She published a memoir book, titled “The Journey To A Sacred Well – Grail Haven”, where she confessed that she had left her family in Great Britain to find a “holy grail”. Now her husband and she produce Grail Haven water. Sam tells that she got rid of her cancer with its help, too. 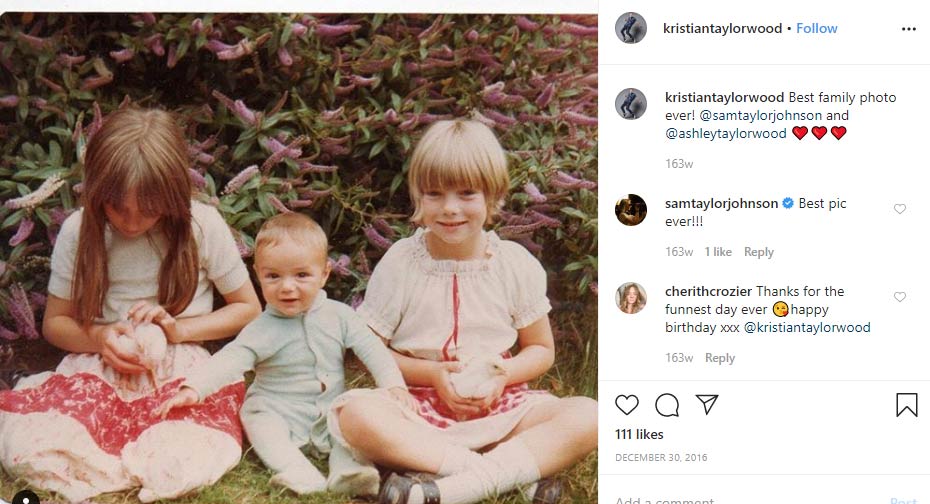 Ashley is Sam’s younger sister. She is her only full sibling. Ashley resides in Northern Italy with her husband and two kids. Her Instagram account is closed, so it’s hard to tell, how she looks as of now. But you can admire Mrs. Taylor-Wood in her childhood years (in the picture). 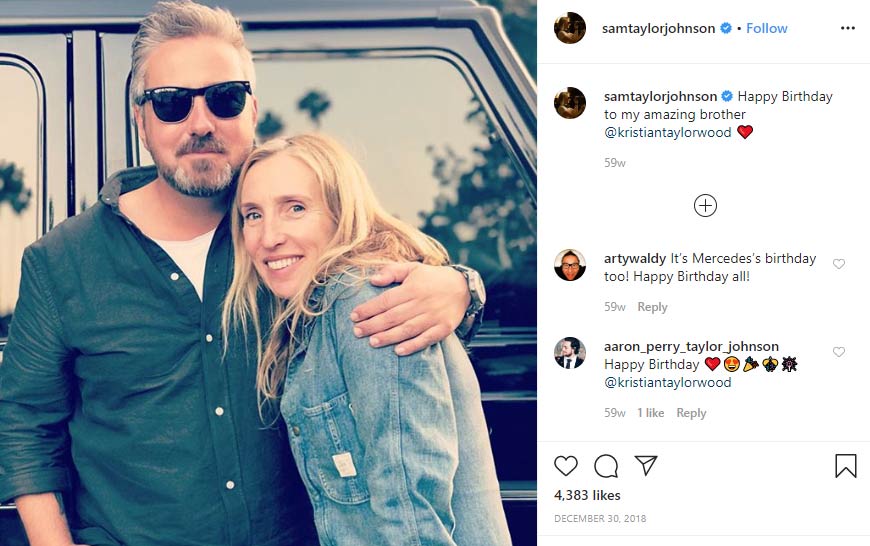 Sam’s mother got married the musician Peter Wood after her first husband David Taylor left the family to travel around the world on a bike with Hells Angels. That family union produced Sam’s younger half-brother Kristian, with whom she is so closely-knitted till now.

Kristian is happily married and raises kids with his wife. His son, named Kit Indiana Taylor-Wood, was born in October 2019. He has an older daughter, Frankie, too.

Like his sister Sam, he has a perfect feeling of taste, which helped him to become a high-profile photographer.

Mrs. Taylor-Johnson looks glamorous and relaxed at the same time. She is not a Hollywood star, she doesn’t need to wear full makeup and high-heeled shoes every time, when she goes out, being afraid of paparazzi, who are chasing her and hope to show the viewers, how ordinary she looks in her everyday life. At the same time, she is not a typical American woman, who is not known to the wide audience and can dress in a careless manner, while walking down Sunset Boulevard in LA.

She created her first big screen movie in 2009, at that time she had already crossed the 40th age mark. To that age, she did a lot – became an awarded photographer and visual artist, parented two girls with the famous art dealer and divorced from him after many years of marriage.

Like any woman, who gave the major part of her energy to her husband and kids, she was glad to get some freedom and realize her creative ambitions. She decided to make a film about the legendary musician John Lennon, focusing on his teen years and his relationships with his mother. The film, titled “Nowhere Boy” brought her the well-deserved success, but made her think about family life again – she fell in love with its main actor Aaron Johnson, who later married her and added her surname to his own.

The family has always been an inseparable part of her life. Being extremely talented, she always knew, what she wanted – to become a good mother. Probably, that’s because her biological mother couldn’t do it for her. Her mom stopped living with her when the girl turned 15.

Born as Samantha Louise Taylor-Wood, she was a student at an art school and after graduation from there; she became an artist and created the great David Beckham video portrait for the National Portrait Gallery.

The family life (she became a mother of two daughters) and then hard battles with cancer (she survived after breast and colon cancer) made her think about death and surviving. That influenced her art.

Having won the battle with cancer, she created a super successful “Nowhere Boy”, got married an actor several decades her younger and gave birth to two other daughters.