Is Angela Simmons a lesbian/bisexual?

What is Angela Simmons marital status?

For Angela Renee Simmons, the famous actress, fashion designer and reality TV star (she gained wide popularity after she had participated in the reality series “Growing Up Hip Hop”), the family has always been a source of her joy and anxiety at the same time. No wonder, because she was lucky to become a daughter of a hip hop star Joseph Simmons, the co-founder of the super-popular Run-D.M.C. band. Unfortunately, her father and mother divorced, when she was still a kid, but her father remained her friend and supporter. Journalists usually asked the girl about her mom and dad, sisters and brothers, and later about her father’s new wife. But many years had passed before she decided to tell everything. Keep up reading! 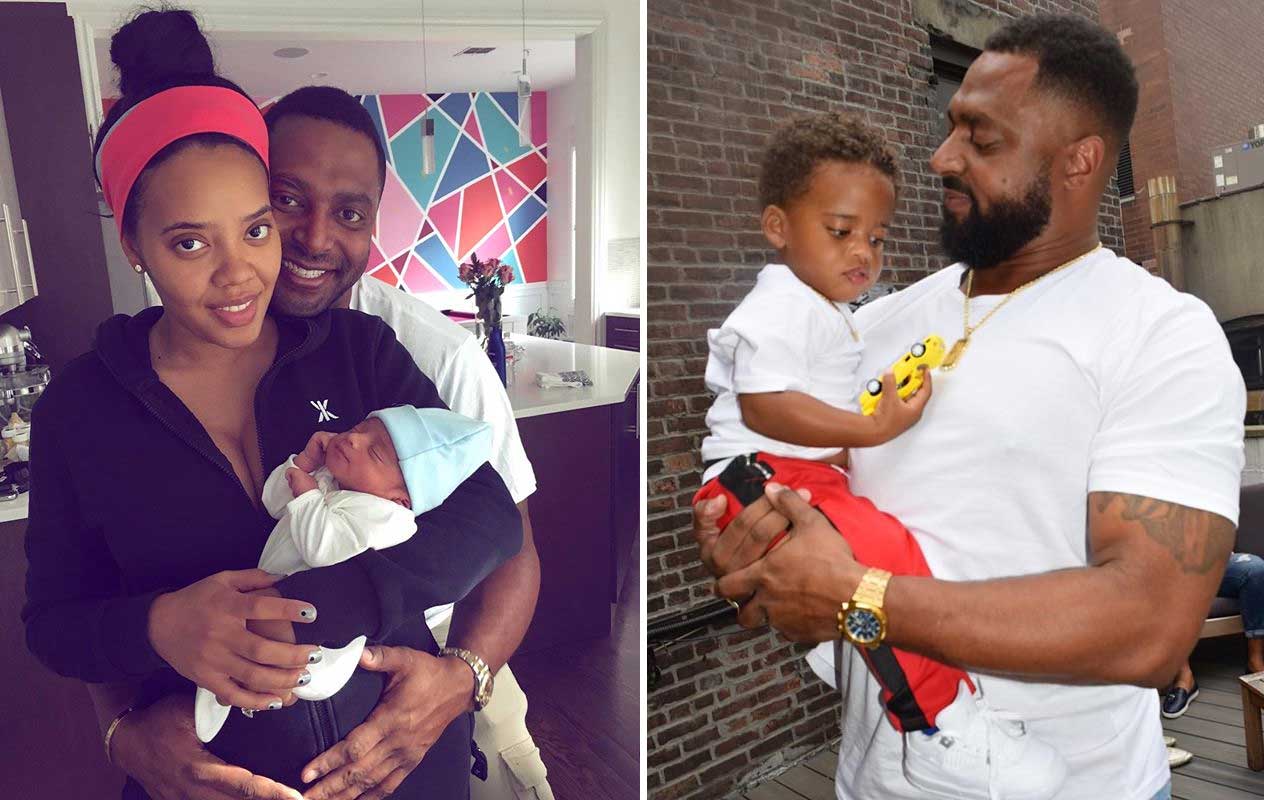 In April 2016, then 29-year-old Angela pleased her fans with positive news – she got engaged to her beloved man Sutton Tennyson Sr. Many people congratulated her profusely, even without knowing anything about her fiancé. But those, who managed to nose around into his past, started to worry about Angela, because her partner had previously been involved in many crimes, and had even served time in prison.

Sutton Sean Tennyson was born and raised in Atlanta, Georgia. The guy was quite smart, but the desire to make money easily led him to prison in 2000. He was arrested for illegal possession of weapons. After serving his sentence, Sutton was released from prison but started making his old tricks. He was arrested again – this time for the credit card forgery and theft. The guy was taken into custody again, but in 2010 he was released and since then seemed to remade himself. He started to earn money honestly. He moved to California and became a partner at Chosen Payments.

It is not known exactly when Sutton and Angela met. But before the engagement, they had been dating for at least six months. Angela got pregnant and Sutton became incredibly happy. In September 2016, the couple became parents for the first time.

Their happiness was cut short when Sutton picked a fight with Angela and, rumors have it, even hurt her physically. After that, the reality TV star left her fiancé and returned the engagement ring to him. And in November 2018, Tennyson was killed by 13 shots. Michael Williams, with whom the victim quarreled shortly before his death, is accused of his murder. 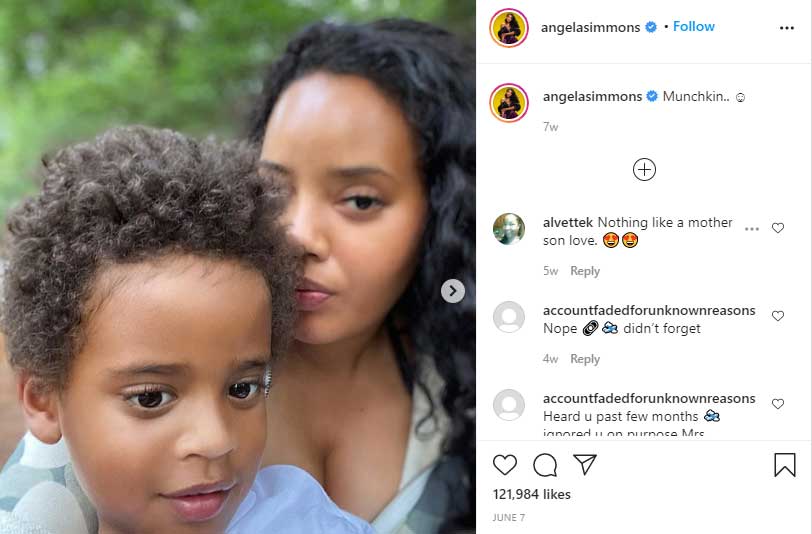 Like any other successful woman who was rapidly approaching her 30th birthday, Angela wanted to become a mother. Therefore, the news that she became pregnant from her beloved Sutton became the happy one for her. The baby was born in the fall of 2016, and of course, she immediately shared this news with her fans on Instagram.

Angela named her boy after his father – Sutton Tennyson. The child has already grown up noticeably and has turned into a bright, active little man. He spends a lot of time with his mother, as well as with his other relatives, for example, with his stellar grandfather. Photos from these meetings often appear on Angela’s Instagram.

Who are Angela Simmons parents? 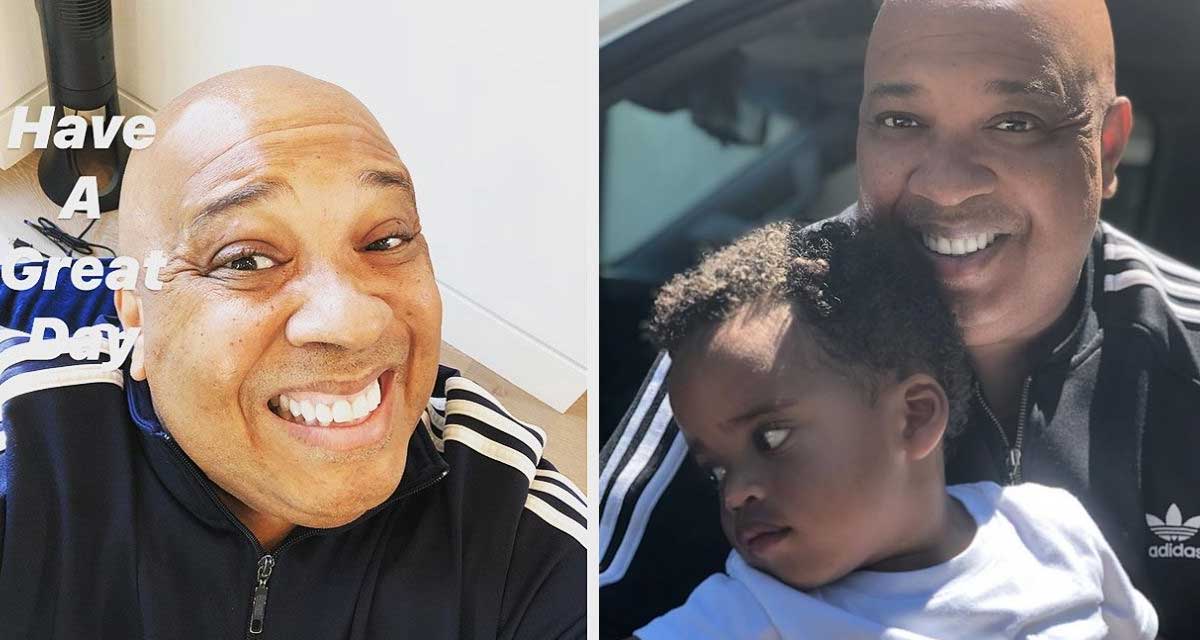 Angela is lucky to be the daughter of a wonderful talented father. Till now, she maintains warm relationships with her dad, spends a lot of time with him, even though she has already become an independent, self-confident woman.

Joseph Ward Simmons was born in Hollis, Queens, New York. He grew up with two brothers – Danny Simmons, who later became a famous artist, and Russell Simmons, whom the whole world knows as a talented producer. With the brothers’ support, Joseph began his way on top, having founded Def Jam Records, the record label. Then he created the successful hip-hop band “Run-D.M.C.”, and became its leading vocalist.

Achievements of Joseph Simmons, who often names himself with a stage moniker Run, cannot be listed within a few hours. He is a DJ and TV personality, and even a practicing minister, whom his parishioners know as Reverend Run. In 2005, Run tried his hand as a reality TV star, having created the show “Run’s House”, which aired for a long time on MTV.

Reverend Run is the father of 6 children. He was married twice in his life. The first time he tied a knot with Angela’s mother Valerie Vaughn. And after breaking up with her, he remarried to Justine Jones. He still shares his life with Justine. 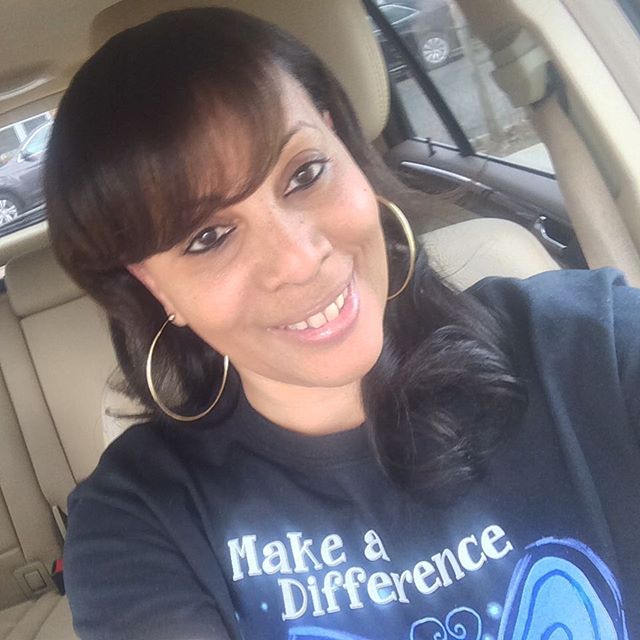 It is hard to tell, who Angela’s mother is by profession, but on Instagram, she introduces herself in a very simple way – a mother of 5 and a grandmother of 3. It seems that this amazing woman has already decided for herself what the priority in her life was, and now she is passionately working on it – building her family happiness. Valerie has three children with her ex-husband Joseph Simmons, and also has a daughter Daryan, from a relationship with a man, whose name is not publicized. She has another daughter, Tiffany, whom she parented with a current husband, Fonz Vaughn. 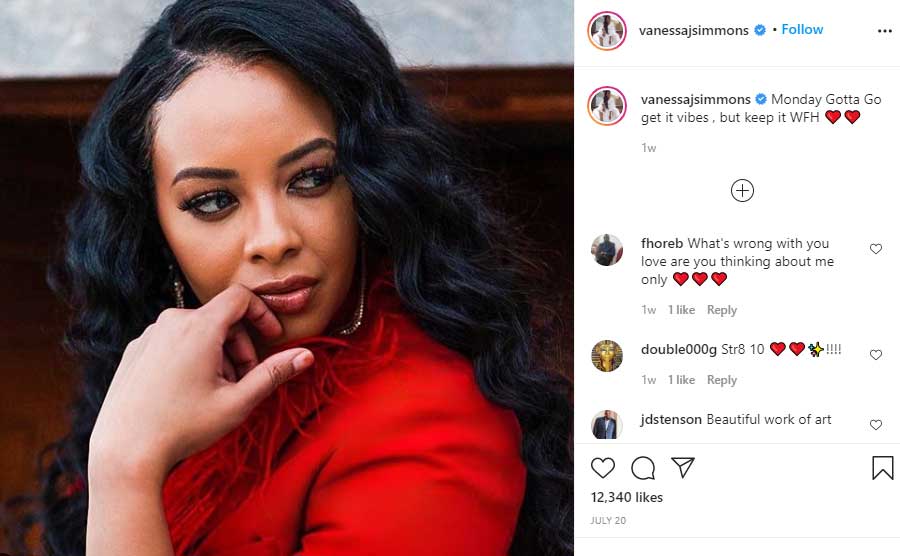 Her older sister is Vanessa Simmons. The girls share not just similar facial features, but also have a common business – they have hounded the shoe company “Pastry”. Besides, Vanessa is an actress, the reality star, who gained initial popularity through appearances in her father’s project “Run’s House”. She is also a mother of a sweet daughter, whom she welcomed in 2014 with her than-boyfriend Michael Wayans. 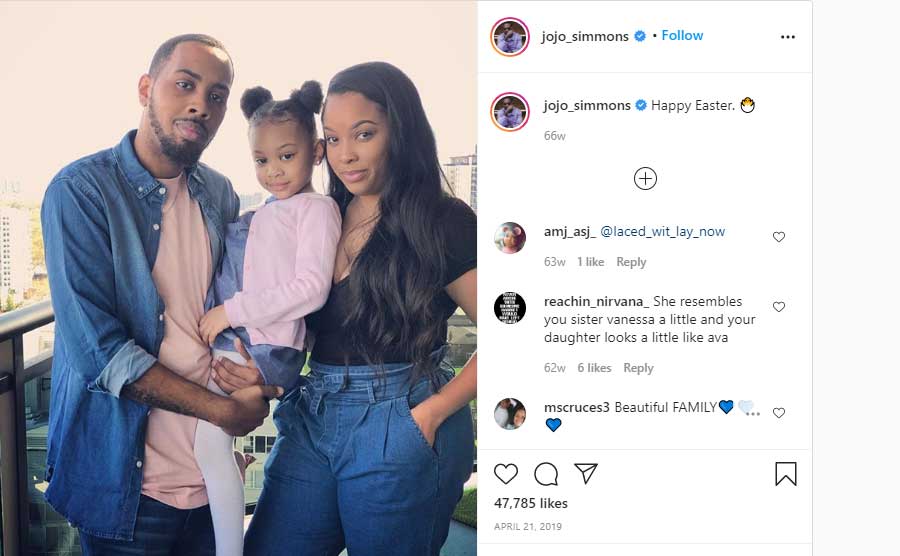 The second Angela’s full sibling is her younger brother Joseph JR, or JoJo. He is the family man. JoJo is married to Tanice Amira. In 2016 they welcomed their first child – a daughter Mia. Like his father, JoJo is the record label owner. His “Whos House Entertainment” becomes more and more successful every single day.

Daryan (younger half-sister from the maternal side)

Happy 26 Birthday to My daughter Daryan it feels like yesterday you was a tiny little thing and now you have blossomed into a beautiful, independent and a go getter. I am supper proud of all you accomplishment and look forward to new ones to come. Mommy ❤️ you Boss lady.

Angela’s other sister is Daryan. She is the daughter of her mother Valerie. The name of the girl’s father is not known to the wide circle. Now Daryan is a successful business lady.

Tiffany Monet Vaughn (younger half-sister from the maternal side) 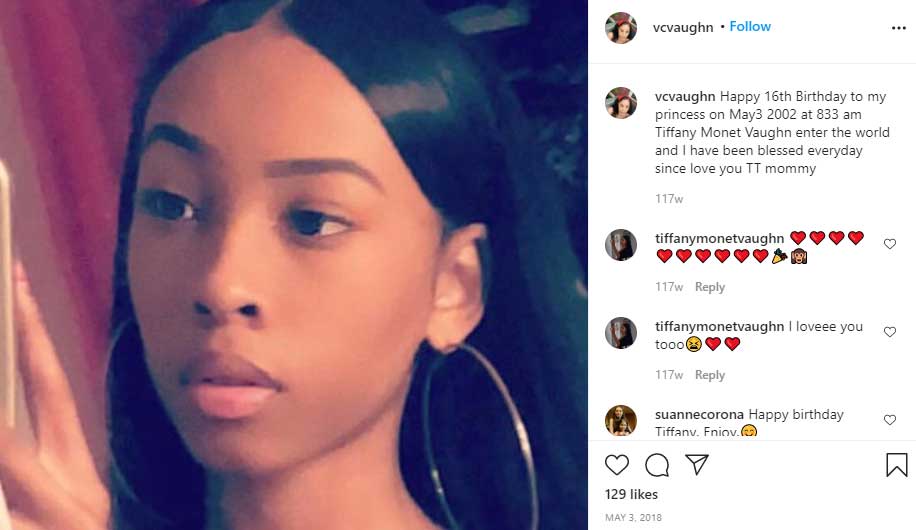 Tiffany is the youngest addition to the big Simmons-Vaughn family. Angela’s little sister was born in the family of her mother Valerie and her stepfather Fonz Vaughn. The girl is in her late teens as of 2020. 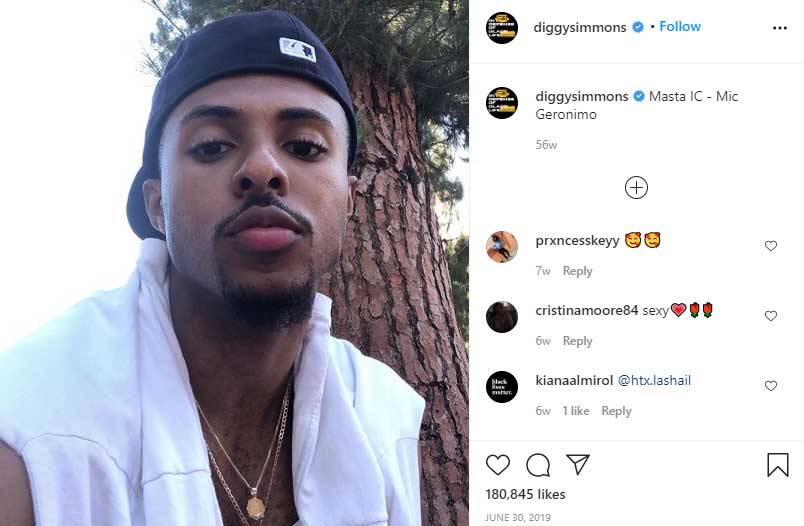 Diggy is Angela’s younger half-brother. He is the son of her father Joseph and his second wife Justine. Despite his so young age, Diggy has already done a lot – he tried his hand as a rapper, and he has already released several singles and a debut album, titled “Unexpected Arrival”. Besides, he earns his living as a model and fashion designer, whose mentor is a famous comedian Pharrell Williams. 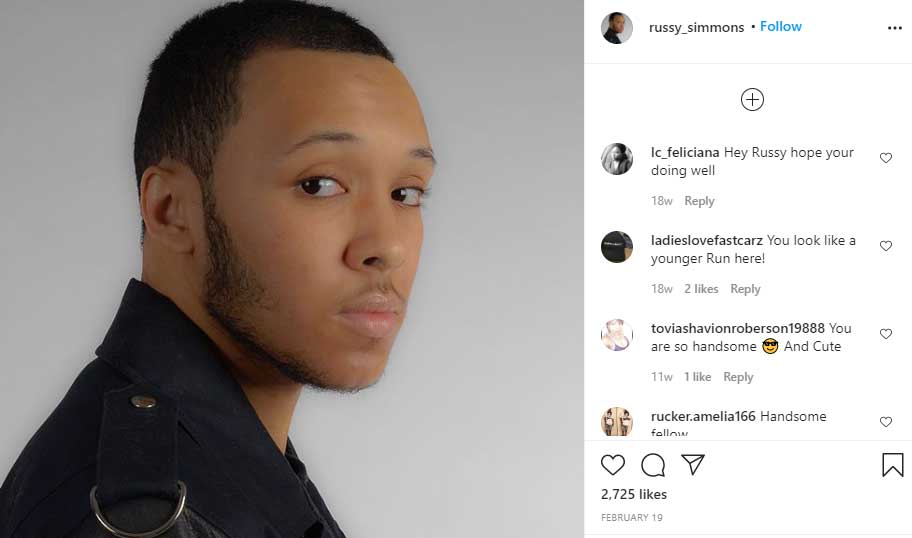 Russell Simmons II, or just Russy, is Angela’s youngest little brother. The son of Justine and Joseph Simmons, he has become popular due to participation on various reality shows, created by his famous father. The fans can see him on the travel channel in the series “Rev Runs Around the World” and in the cooking show “Rev Run’s Sunday Suppers”. His talent for acting was marked by Teen Choice Award in the category “Reality TV Star”.

Justine and Joseph became the parents of a girl Victoria, who died several hours after her birth because of an inborn health disorder, named omphalocele. That sad event was shown in detail on “Run’s House”. That was a decision of Victoria’s parents to share their family tragedy with the world and support others in a similar situation.

After Victoria’s death, Angela’s father and his current wife adopted a little girl, named Miley Justine Simmons. Now she is a part of a big Simmons family.