Is Kirk Cameron a gay/bisexual?

What is Kirk Cameron marital status?

Who is Kirk Cameron wife? 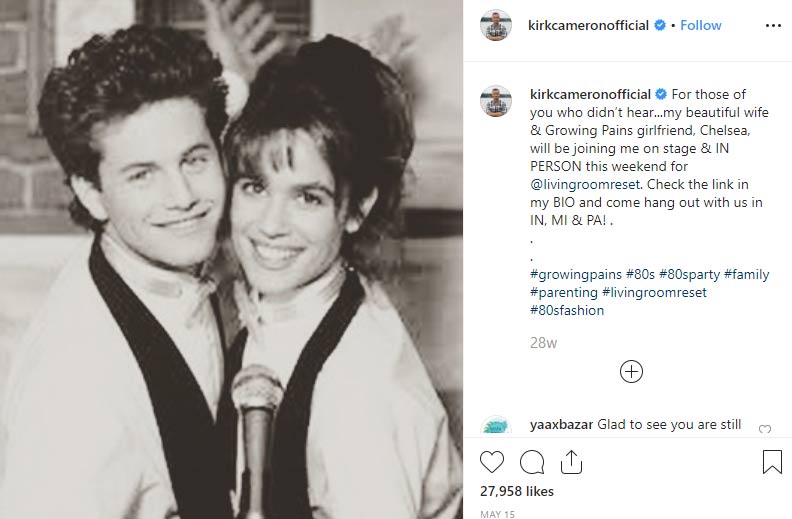 Do you know the secret of long-term marriage? If not, then you may ask Kirk Cameron and Chelsea Noble about it (by the way, the couple created an online course, the aim of which to help people create a happy family). Two Hollywood stars, who met at the set of “Growing Pains”, tied a knot on July 21, 1991. They bring up six kids (two biological and four adopted ones).

Chelsea Noble’s real name is Nancy Mueller-Cameron. She was born in the town of Cheektowaga (the New York area). She started the career of an actress in the late 1980s with the small role of Samantha in the series “Full House”. After that, she appeared in several TV shows and big-screen movies, but her career can hardly be called very successful. Nevertheless, Chelsea found her happiness – not in acting, but in God and happy family life. 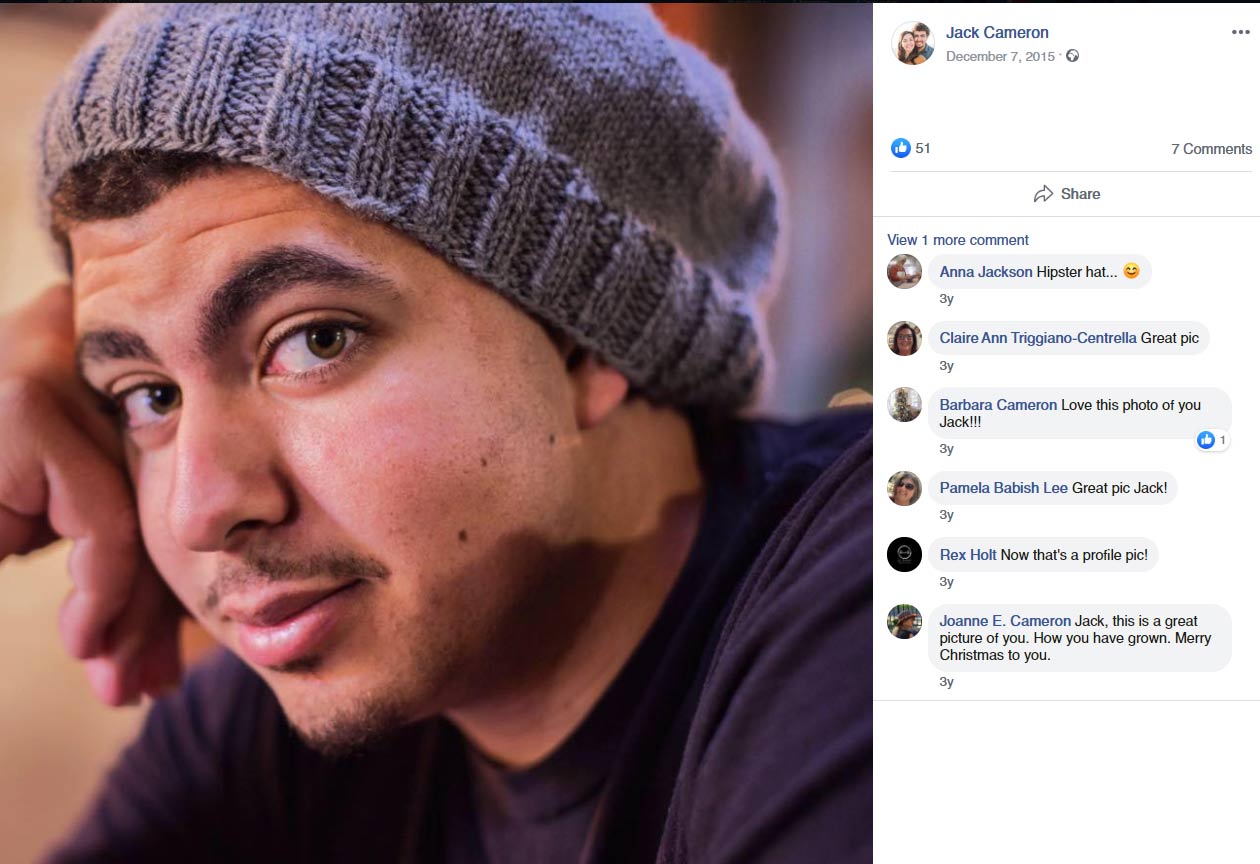 Jack is the oldest child in the family of the famous actor Kirk Cameron and his wife Chelsea. Many years ago Kirk confessed in his interview, that he used to tell Jack (and his other adopted children), how he wanted to welcome him in his family. To the actor’s mind, it helps adopted kids to avoid the feeling of useless, if they have any.

In his primary school years, Jack was interested in making figures from Lego and in making music. But later he chose the way of his father and opened his heart to faith. He studied at Trinity Pacific Christian School. As of now, Jack is a director at the 2nd Mile Church. He moved from his parents’ house in Agoura Hills, CA to Fort Worth, TX. He is married to Kaylee Cameron. 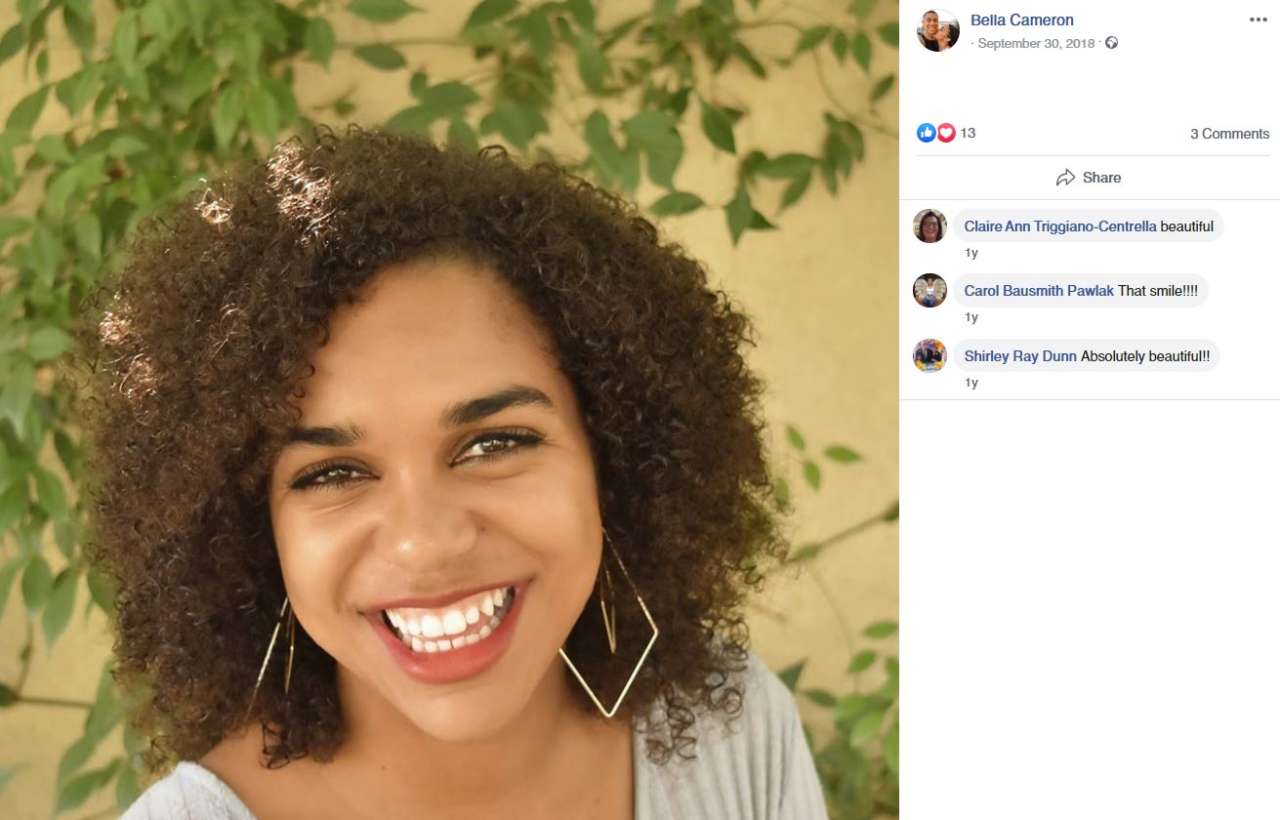 Isabella is Kirk’s second oldest child, whom he adopted with his wife Nancy Cameron (officially known under the name Chelsea Noble). The girl is named simply as “Bella” in the family circle. Her face is known to the lovers of Kirk’s movie “Saving Christmas”, where she played a small role of a partygoer. In spite of occasional screen work, Bella is not an actress. She is a religious figure.

The girl resides in Fort Worth, Texas, just like her older brother and serves in the same church. She is in relations with Justin Moore. He is a specialist in communication technologies. Previously, she attended Trinity Pacific Christian School and practiced ballet. She attended music lessons, too. Nowadays Bella is an occasional singer. 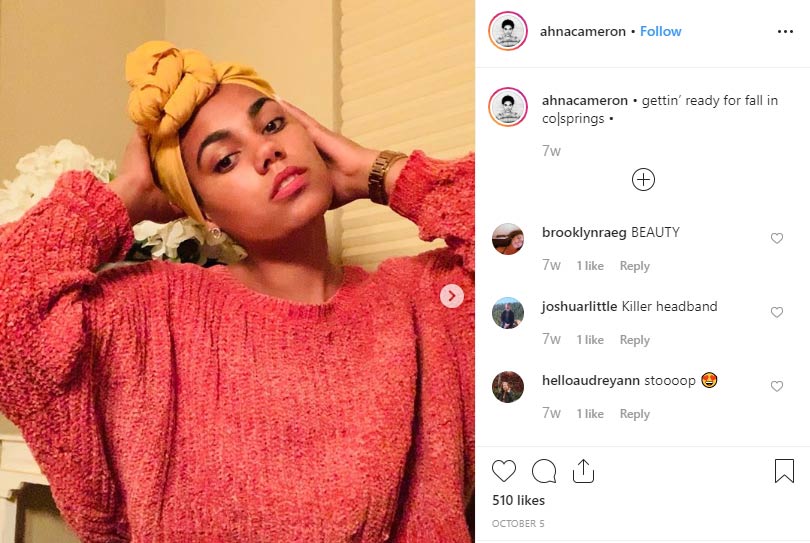 Anna Cameron prefers to stay out of public attention. Not much is known about her. The girl practiced ballet and singing in her early years. She is rumored to work in the entertainment industry as of now. Anna is busy with charity projects. 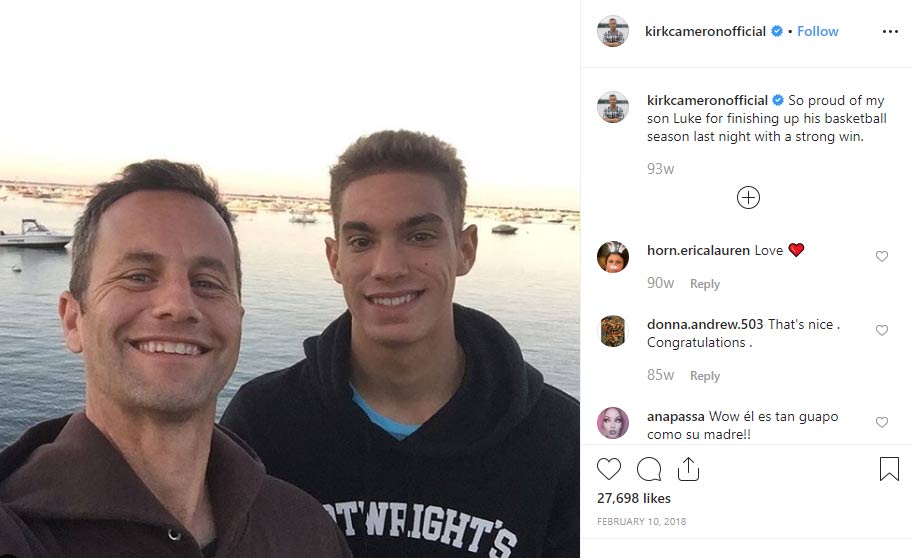 Luke Cameron is the fourth adopted child in the family. He was born and raised in Agoura Hills, CA. The young man doesn’t share the news on his personal life through the media, so nothing is known about him.

As Chelsea told in her interview, her husband and she decided to start from adopted kids, to show that they were the first and they were not less important than biological children in their family.

But in 2001 they finally welcomed the girl, who not just mentally, but also genetically belonged to the Cameron clan. Olivia is a young beauty as of now. She has already tried her hand as an actress, and appeared in her father’s film “Saving Christmas”. 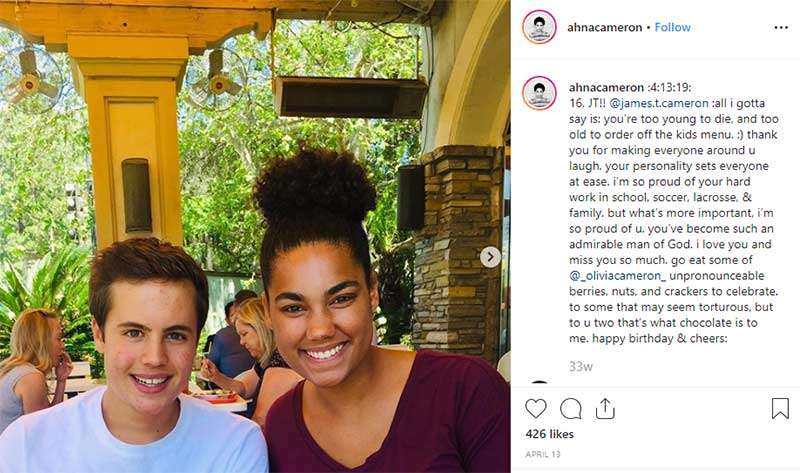 James is the youngest addition to the Cameron family. Like his sisters, he was busy on the set of “Saving Christmas”. The boy prefers not to share the details of his personal life on social media.

Who are Kirk Cameron parents? 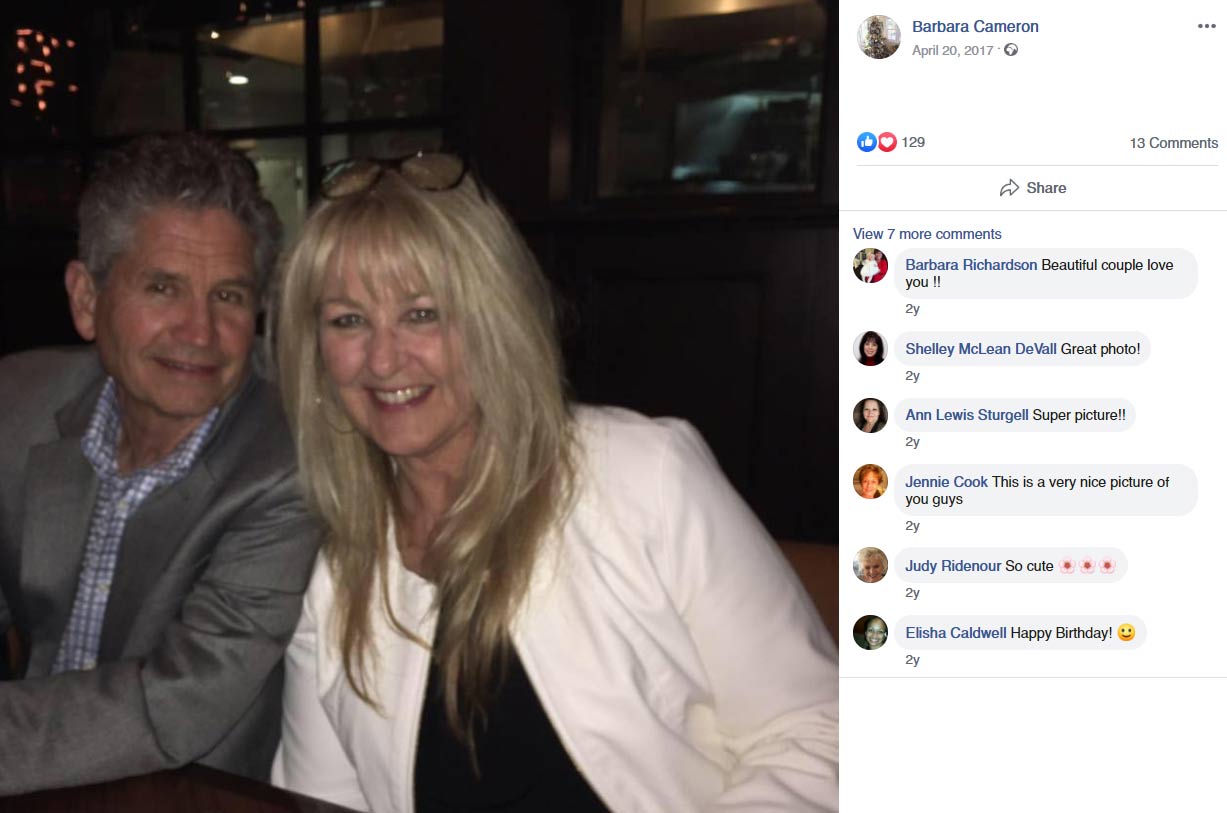 Robert Roy Cameron, Kirk’s father, is retired as of now. But in the 1970s he was a famous actor, whose face was known to each viewer in USA and worldwide. Kirk participated in many hit movies and TV shows, including the old-fashioned comedy series “The Misadventures of Sheriff Lobo”, more recent series “Curb Your Enthusiasm” and the long-term drama “Rescue Me”, featuring such talented actors as Denis Leary and Michael Lombardi.

In his “behind the camera” life, Robert is a faithful husband of Barbara Cameron (whom he wedded in 1969) and a father of four kids – a son Cameron and his three sisters. 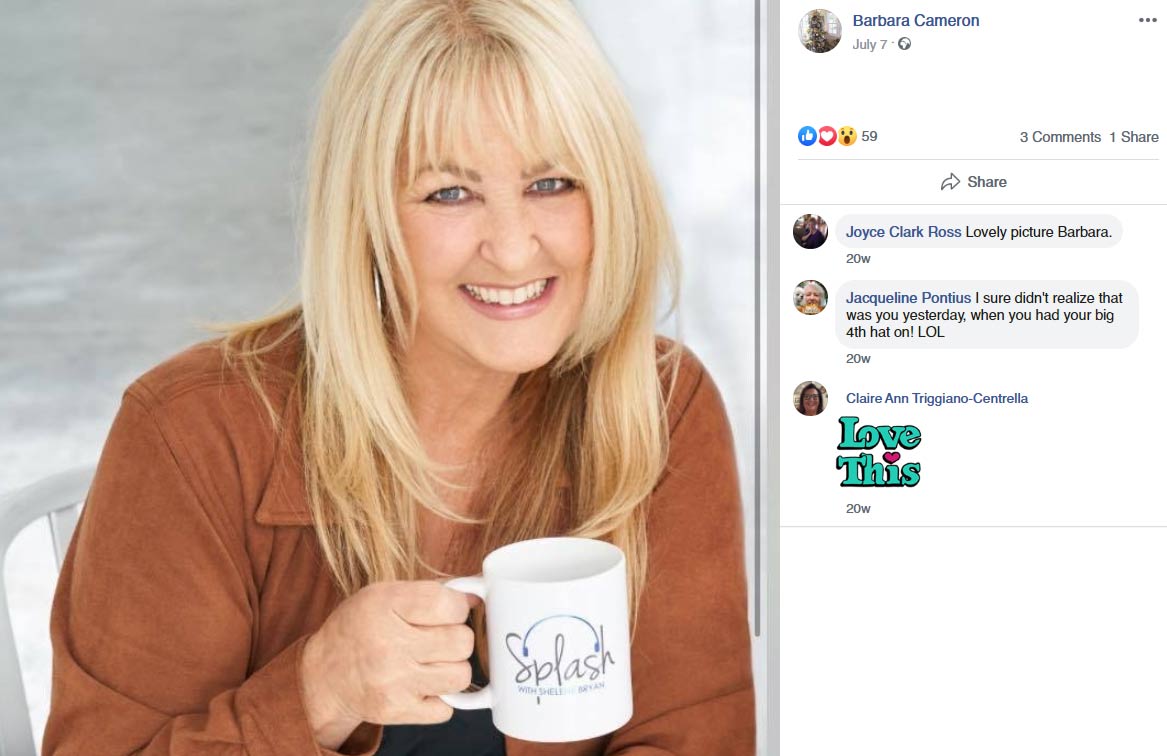 Kirk’s mother stood by his side all the time. She was near him even at the “Growing Pains” set, because she was busy in the series, too.

Yes, Kirk’s mother is also an actress. The fans know and love her as the talented performer, whose resume includes the talk show “Praise the Lord”, as well as the series “Full House”.

Since the early 1970s, she joins the activity of the TV star with parenting of four kids. She has been happily married to the actor Robert Cameron for years. 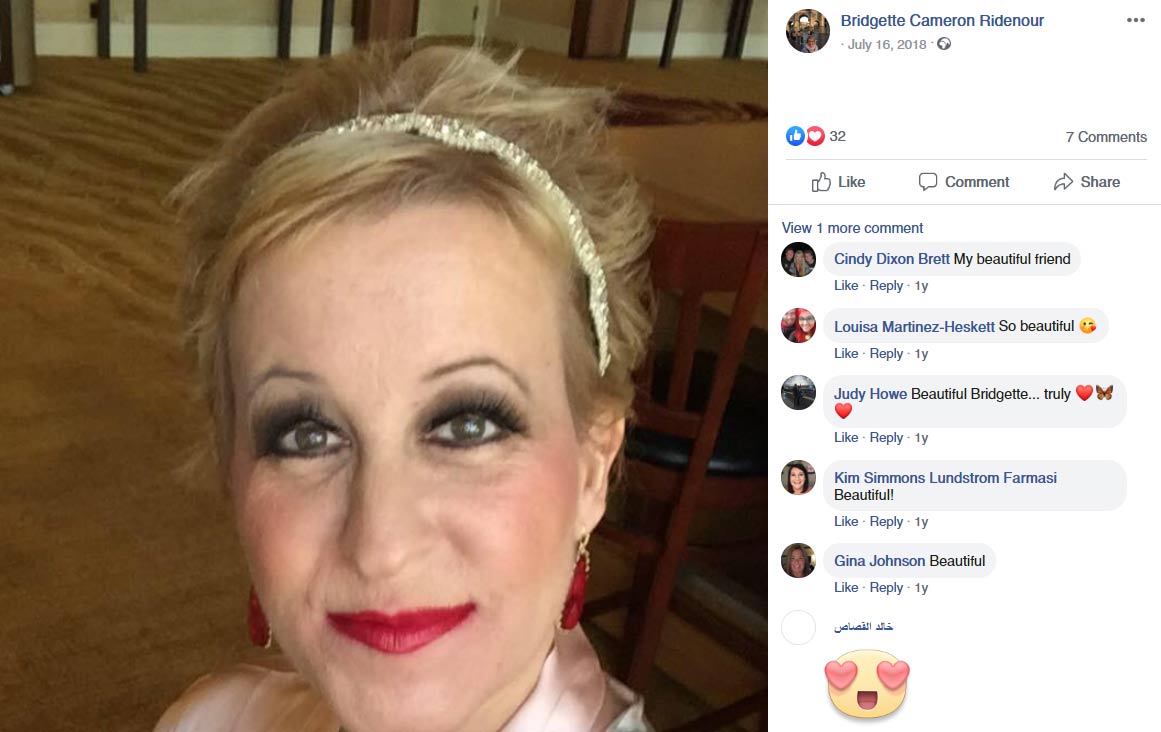 Kirk is the oldest child in the Cameron family. He has three younger sisters. Bridgette and Kirk are just one year apart.

Bridgette Cameron, who changed her surname after marriage to John Ridenour, resides with her husband and their three kids (two sons and a daughter) in La Quinta, CA.

John and Bridgette met for the first time at the set. She is an actress, known by the projects “Home Improvement” and “Full House”. And he is a cameraman. The names of their kids are Everett, Reese, and Cameron. 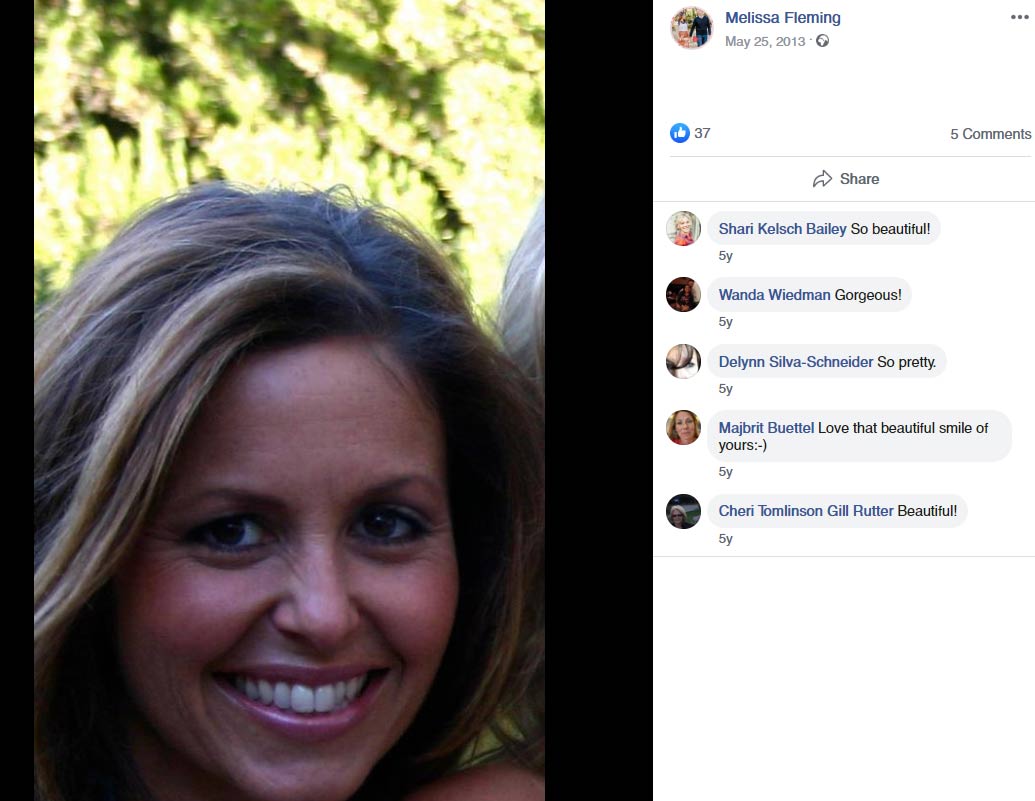 Melissa Rachelle Cameron is a beautiful positive woman, who is also related to the famous actor and religious figure Kirk. She is not an actress (and that is weird if to take into consideration the fact that she comes from a famous acting clan).

She resides in Chantilly, VA as of now. She is married to Jason Fleming and has five kids with him. 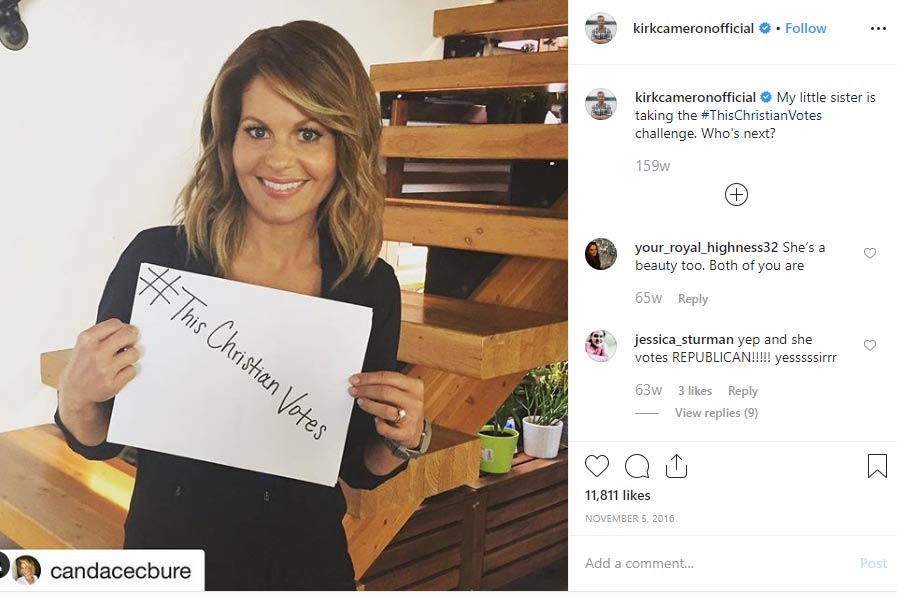 Candace Helaine Cameron is the other celebrity from the well-known family. She is an actress, best known by her roles in the series “Full House” and “St. Elsewhere”.

She studied at Chatsworth High School. The girl started the career of an actress at an early age. She played several roles, but then changed the focus of her attention to family life. She is a wife of a former hockey player from Russia Valeri Bure. She has three kids with him – Natasha, Lev, and Maksim.

His life may seem weird from someone’s point of view, but obviously, it’s not ordinary. Having gained a status of a child star at an early age, Kirk Cameron put his career in the entertainment industry aside and left the limelight. Instead of it, he opened his heart to God.

He was born in Panorama City, CA in the family of Robert Cameron and his wife Barbara. Kirk started acting at the age of 9, and his first screen appearances were in the commercials. In the early 1980s, he debuted on the big screen in the movie “Goliath Awaits”. In 1985 the teenager Kirk Cameron felt the first taste of fame. He got the role in the series “Growing Pains”. He skillfully depicted the lady’s man Mike, the member of the Seaver family, which stands in the center of controversy in the TV show. The series gained worldwide popularity, and the young man Cameron immediately understood that being rich, popular and influential is very pleasant. And his decision to change his life after the end of the show sounded too strange for everyone, but not for Kirk himself. He started to think about God after he had crossed the ways with the stranger, who convinced the TV star, that nothing is occasional in this world, and that everything here was created by God.

Now Kirk is famous not just by his TV projects (among which “The Growing Pains Movie”, “Left Behind III: World at War”, “Saving Christmas” etc), but also by his religious and charity work. He is a co-founder of “The Firefly Foundation”.