Is Nicki Minaj a lesbian/bisexual?

What is Nicki Minaj marital status?

Who is Nicki Minaj husband? 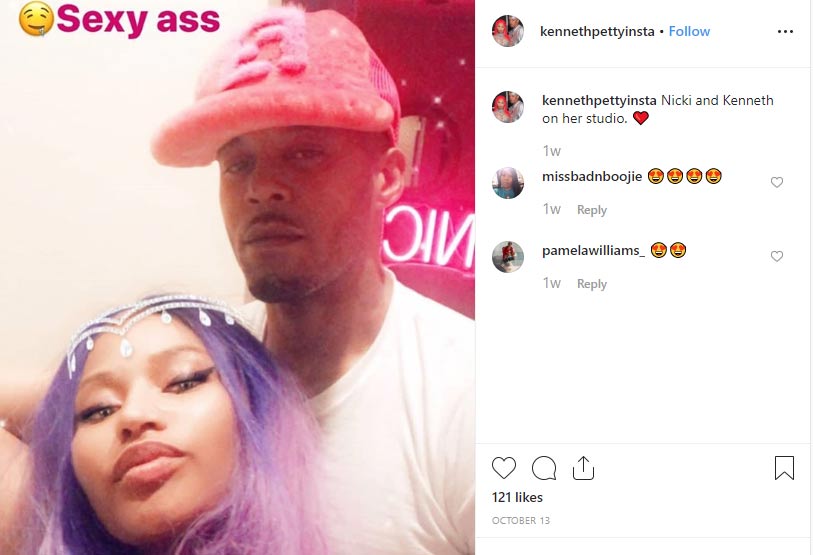 Nicki Minaj kept her relationships with Kenneth Petty in secret, probably, that’s why she didn’t confess to her fans that she had married him on October 21, 2019. She has just hinted through Instagram about the new events in her life and changed her name to Mrs. Petty on Twitter.
Kenneth and the popular rapper Nicki Minaj met when both were teens. They started dating many years later, in December 2018. The couple tied a knot after less than a year of love. After that Nicki hinted, that she dreamed to have kids.
Mr. Petty is not that innocent as he seems. He is a registered sexual criminal, who spent some part of his life in prison after he had raped a 16-year-old girl. But now it seems, that Kenneth has changed and loves his wife. By the way, the man is busy in the music industry, too.

Who are Nicki Minaj parents?

Robert Maraj (who also sometimes is referred as Omar) is known all over the world as a father of a super popular rapper Nicki Minaj. In her numerous interviews the musician told, that her father was drug addicted and physically abusive. In addition, Barbie Dreams singer opened up, that she was always afraid for her mother’s life during Robert’s fights with his wife, and even dreamed to kill him. Her hatred even increased after his father’s attempt to burn their house. No need to say, that he was on drugs.

Later Robert gave an interview himself and told, that in spite of his occasional rage strokes, he had never been so abusive as his daughter says. The man served as a financial executive and his hobby was gospel singing. He married Carol Maraj in his youth, and they created a big family with 4 children.

After becoming alcohol and drug addicted, Robert ruined his relationship with a wife and they split. Finally, Robert quit drinking and using drugs and turned his face to church. 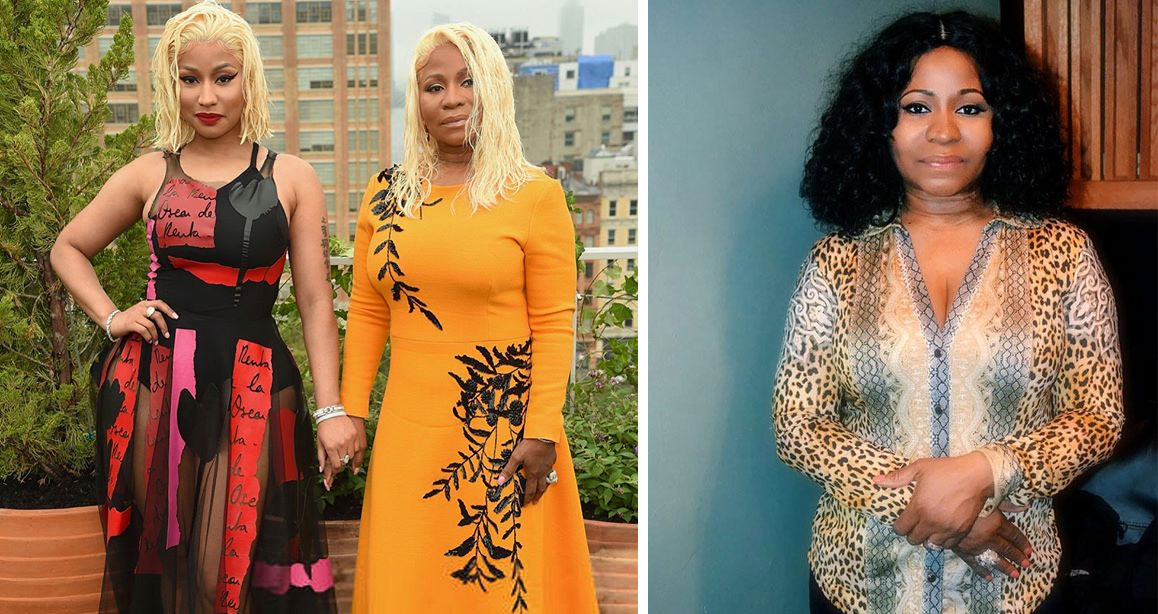 Currently Carol is known as a mother of legendary Nicki Minaj and an ex-wife of an abusive and drug-addicted husband. But not anyone knows that in her younger years a woman had musical ambitions of her own. She was a gospel singer and songwriter.

Carol was born in Saint James (Trinidad And Tobago). There she met Robert, and they tied a knot. After giving birth to their four kids, including Nicki, a married couple decided to move to USA. They were looking for higher earnings, so they left the kids in the granny’s home and went to the country of big opportunities.

There Nicki served as a clerk at National Commercial Bank, later she started to work as a foreign exchange teller. In addition, she was baby-sitting in order to make the ends meet. Together with her husband the woman planned to buy a house in USA.

Later she took kids and moved to New York, in the house of her friends’. But Robert found them and tried to burn the house, when Carol was in. That caused the final split of the couple.

During many years Nicki’s dad was estranged. Till now the star hates him and doesn’t hide it from the whole world. That makes Robert annoyed. 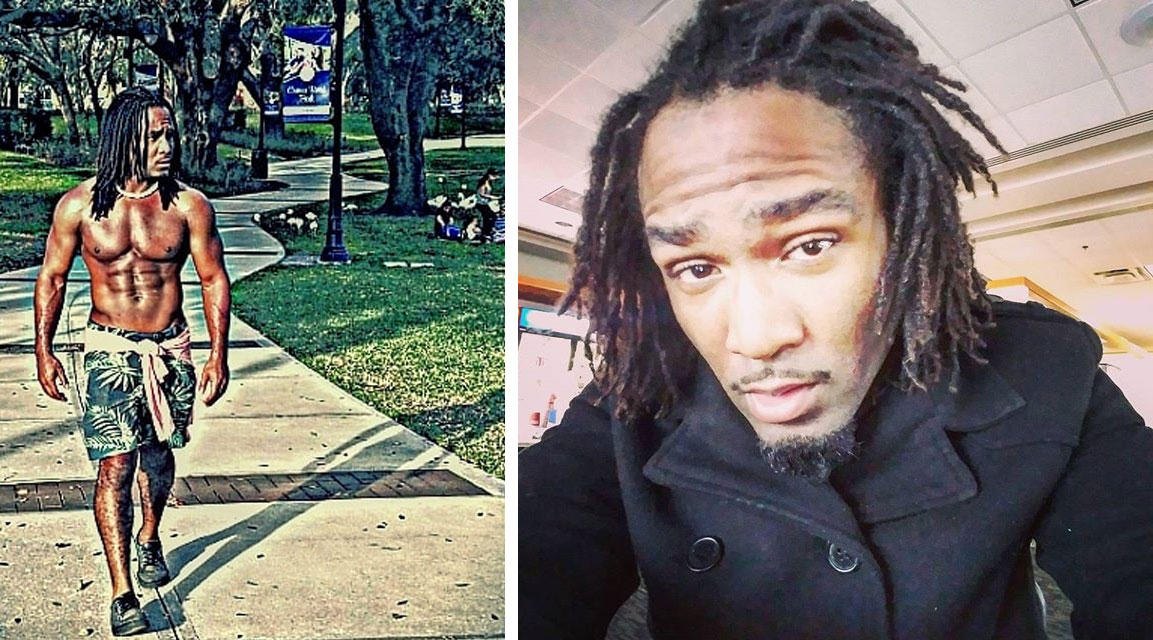 The fact, that Nicki Minaj is Brandon’s sister is not proved. But in one of her interviews she named him “my half-brother”.

Brandon is internationally popular as a rapper and singer. He rose to fame in 2007 after releasing his first music video. His most famous songs are “Dismissed”, “Control”, “Raw” and others. As Nicki Minaj used to say, he was signed with the same label as she – “Young Money”. 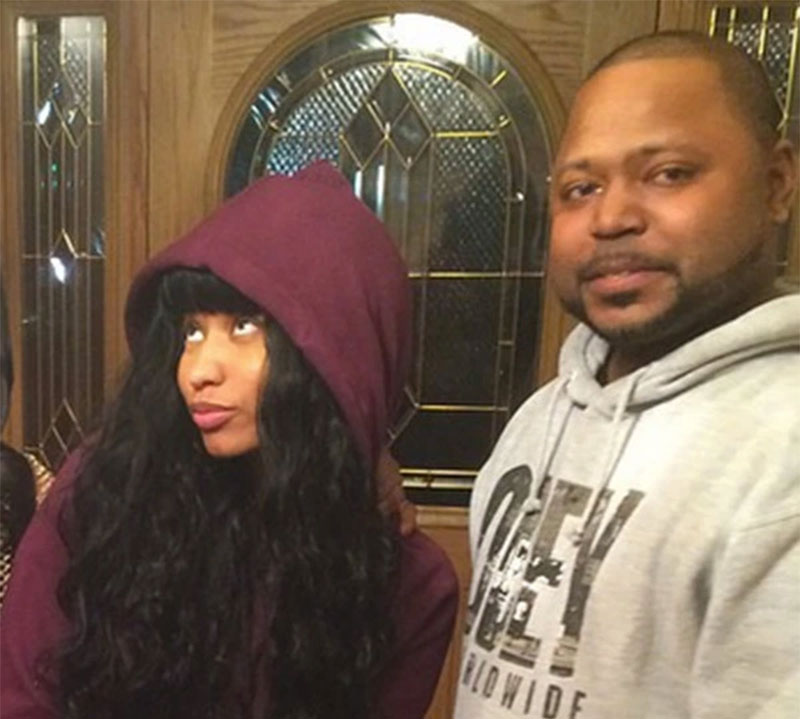 Jelani Maraj is Niki’s older brother. He was born in Trinidad And Tobago and moved to Queens, New York, USA in the company of his parents and siblings, when he turned 9.

Nicki’s younger brother, whom she mentioned in one of her songs and told, that near him she is just “a little sister”, was quite a successful man. He operated Ozone Park Daycare in Queens and planned to open another one in New Jersey.

He was in relationship with Jacqueline Robinson during several years. In August, 2015 they tied a knot, and Nicki spent $30, 000 for their wedding – she made such a generous gesture to show, how happy for them she was.

But the couple separated after it was revealed that Jelani raped Jacqueline Robinson’s daughter. The man was prosecuted, and his fault was proved. Maraj’s stepdaughter told to the court, that the man had been raping her since she was 11. One day her little brother even witnessed the process of raping. Jelani’s DNA was found at the girl’s pajama pants.

After that Nicki’s brother was convicted to 25 years of jail. His famous sister didn’t give any comments on the situation, although Jelani’s attorneys reported, that she was going to testify in the court. 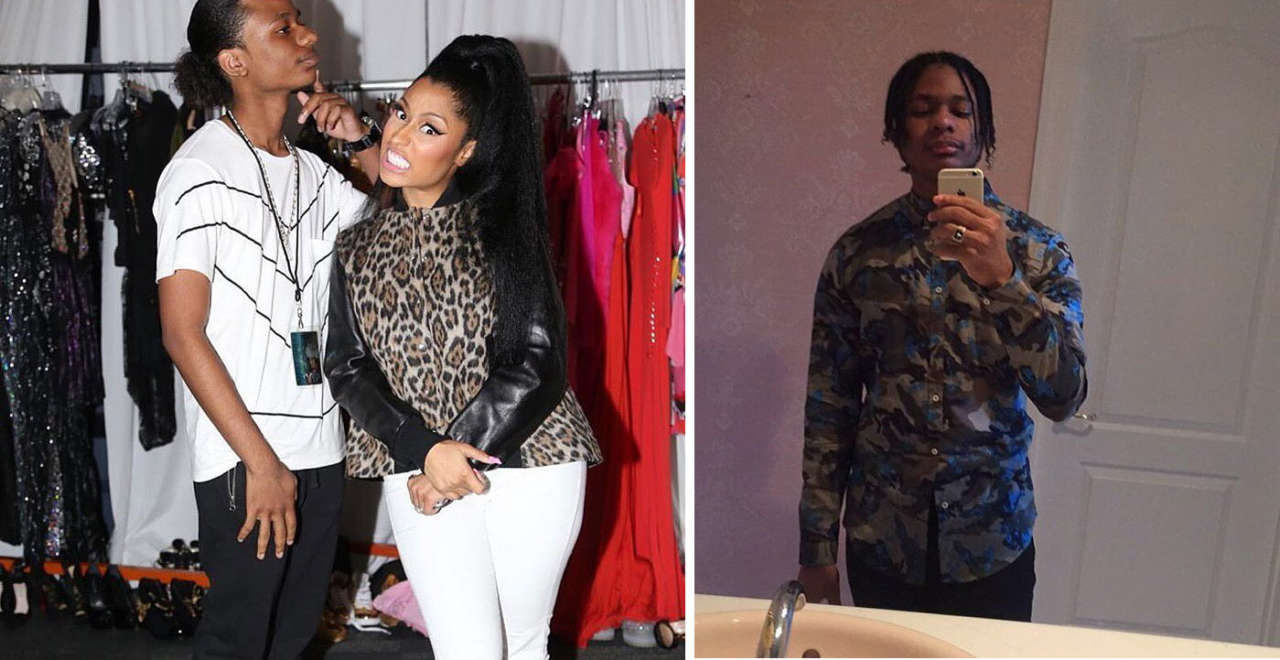 He is the rapper’s younger brother, whose is nicknamed as Caiah in the family circle. Unlike his older siblings, Micaiah was born on the territory of USA. His home city is Baldwin, New York.

The young man is close with his older sister. Nicki was so kind to arrange a great birthday party for Caiah’s 16th birthday.

He is fond of music and can play drums rather well. The man is the fan not just of his sister’s music, but also of Rihanna’s. Previously he dated Ilissa Kemper, but now he is single. 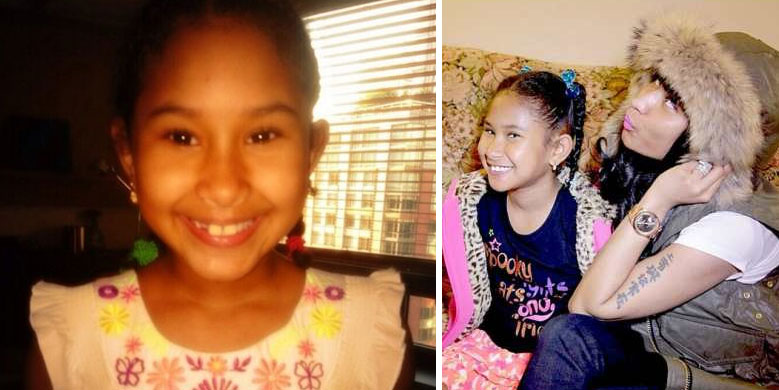 Ming is Nicki’s little sister. They like to spend time together and look so similar! In 2017 the girl graduated from a high school. According to the words of her friends, she was planning to become a lawyer. 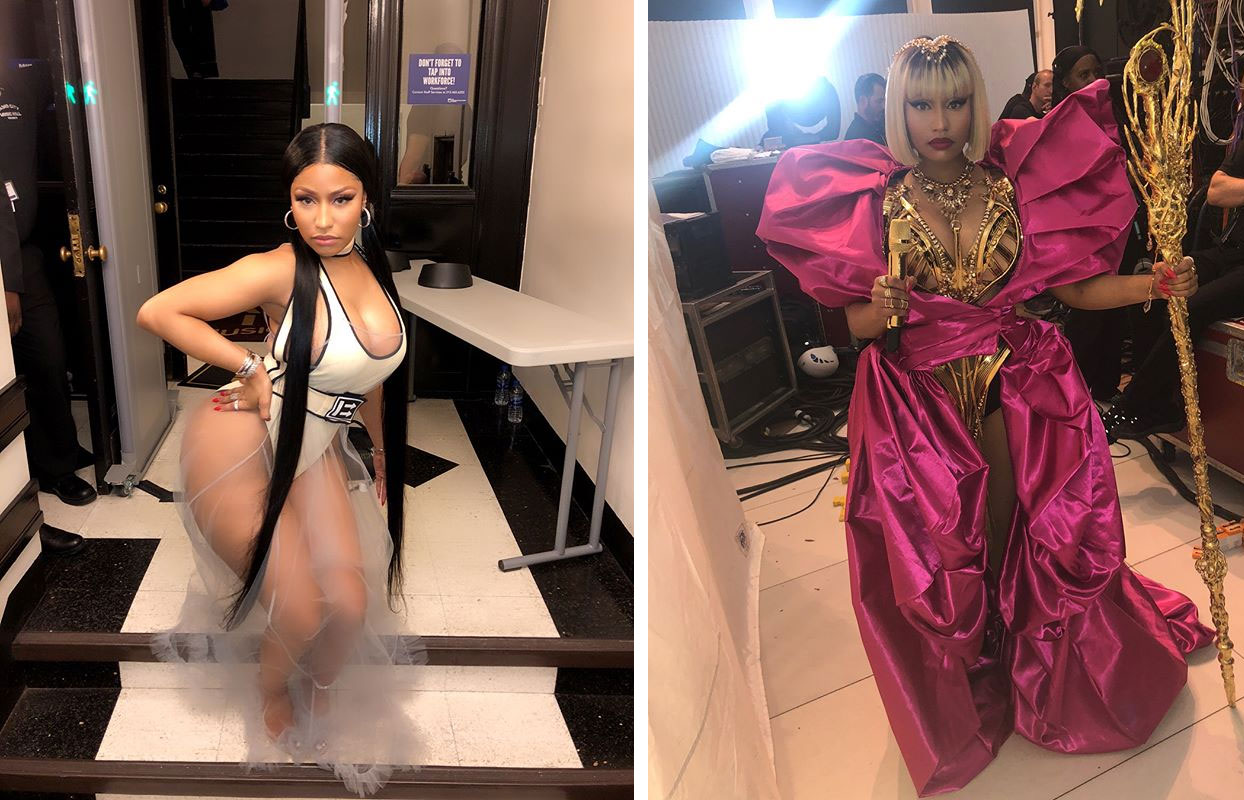 Nicki Minaj, whose birth name was Onika Tanya Maraj, resided with her parents and an older brother Jelani in St. James. When the girl turned 5, their family moved to USA. Her childhood was spoiled by her father’s drug addiction and abuse.

In USA her mother gave a birth to two younger siblings – a brother and a sister. But that didn’t prevent her father from being cruel with her mother, so the future star stopped seeing him.

To cope with her childhood problems, Nicki started to write songs. She authored lines for the first time, when she was just 12. In addition, she studied acting at LaGuardia High School. The girl tried to escape from cruel reality in her family life, so she decided to change her name for Nicki Minaj. Thus, she pretended, she was the other person.

Nicki started her career from posting her music online at MySpace. The young talented girl soon developed a large fan base and was noticed by a rapper Lil Wayne. He offered her to record a number of songs together. That opened Nicki the way to the world of professional music.

She released her debut album “Pink Friday” through the label “Young Money”. It was certified as platinum. As for now the star boasts with 4 studio albums. In addition, she is an occasional actress. Among her works there’s an appearance in the film “The Other Woman” as Cameron Diaz’s assistant.

Guess which performance is the MOST VIEWED from Monday’s VMA’s????!!! Link in my bio to check it out! Thank you to this crowd. You guys made this such a legendary time. Love you. Love you. Love you so much. YOU COULD NAME ANYBODY, WEATHER MAN, PICK A DAY! KOBE, KD, KYRIE! PICK A K!!!!!!